Funny-to-play: Having the last laugh with a successful mobile comedy game 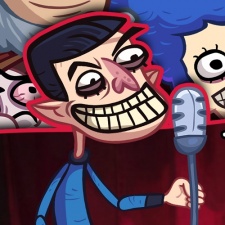 There's little new to the notion that video games can be great vehicles for comedy.

From the Monkey Island series' witty dialogue to the elaborate satire of popular culture and human behaviour that is Grand Theft Auto, video games have delivered humour in many ways.

And then there are those more recently releases that have raised a smile through mechanics; titles like Surgeon Simulator, where the joke comes via a means more distinct to video games. In Bossa Studios' eccentric creation, it was the interaction that made players across the globe chuckle and guffaw.

Over on mobile, there is perhaps an even more distinct way to bring smiles to players' faces, and a bounty of reasons to do so.

Smartphones offer the potential of a pocket-sized comedy club – an entirely unique way to interact with humour. Mobile titles have, of course, long aped the traditional ways other video games spin out a joke: usually meaning written scripts and visual gags.

There are, however, increasing numbers of mobile titles today that endeavour to be funny in rather unusual ways, which brings two questions to bear. What makes mobile a significant platform in terms of delivering comedy gaming experiences distinct to the hardware? And why even bother trying to make a mobile gamer laugh?

The answer to that first question is a tricky one.

"It is a particularly tactile platform, which helps a lot," offers Seb Burnett, creative director at Rumpus Animation, which brought comedy adventure game Bertram Fiddle to the world.

"Playing on mobile is quite a personal and direct experience. Bertram's adventures are basically designed to be enjoyed like a book, sat on the sofa. You can uncover the story, pore over the details and take your time - or if you are an idiot with no concern for how much effort the developers put in to all the nuances and details you can rush through and skip the dialogue. It's totally up to you. I don't mind."

Players need to be confident that your game will deliver some kernel of comedy before they commit their time to boot it up.

Mobile games, for all their reputation as casual and 'dip in' experiences, demand focus, however fleetingly. And focus is a spotlight under which comedy thrives, because jokes that feel personal often prompt the biggest belly laughs.

Perhaps at a more basic level, though, comedy boasts potential on mobile for the same reason games do.

"It fits into people’s little pockets of boredom: riding the bus, waiting for an elevator, or sitting on the toilet," says Jim Wagner, producer at East Side Games, which has flourished in taking the Trailer Park Boys television mockumentary IP to mobile.

"But you have to design your game to be entertaining and funny in those tiny sessions. Players need to be confident that your game will deliver some kernel of comedy before they commit their time to boot it up."

And therein lies the challenge. Most agree comedy works well on mobile – and not just to prompt mirth. A laughing player is an engaged player, and we all know how important engagement is to making a living from mobile game development.

And in the same way a Stewart Lee set would not work delivered on a piece of paper in a Christmas Cracker, the joke mobile developers tell must fit the form.

"I think mobile is a very different platform than TV or even console," Wagner continues. "You have to think about what you’re competing against for 'funny' on the mobile platform.

"You’re not competing with movies and TV shows, you’re competing with Twitter, Instagram and instant messaging. Players need a comedic payoff every session, which from a game point of view can be very difficult to keep up with."

To best that challenge the East Side team built a structure where story is delivered in tiny chunks, conceived to be perfect for a mobile experience.

By layering and scattering many and multiple simple laughs, the player is constantly drizzled with a deluge of comedy nuggets.

"Each scene is under 10 seconds so the player should never feel like they don’t have time to enjoy it or that it distracts them from the experience," he elaborates.

"We also designed the narrative elements to act as return triggers. You often leave the session with a clear knowledge that when you come back you’ll be able to complete a goal and that goal could reward you with some comedic entertainment."

Over at Magic Notion, the team had created a game that was lauded and beloved because – at least in part – of its personality. Kitty Powers' Matchmaker is a procedurally generated dating simulator, or 'love roguelike', from the mind of Rich Franke.

Franke brought his charismatic drag persona Kitty Powers to mobile with the game and in doing so learned a great deal about how to make comedy hit the right beats on smartphone.

"We have a number of approaches to making our game funny," Franke reveals. "By layering and scattering many and multiple simple laughs, the player is constantly drizzled with a deluge of comedy nuggets. Lots of small bits of often-procedural comedy keeps the laughs fresher for longer."

Procedurally generating comedy might sound like tackling a technological litmus test for robots endeavouring to understand what it is to be human, but the team at Magic Notion cracked it, and in doing so found an intelligent, efficient way to make mobile and comedy work for each other in tandem.

"From the randomly generated customers and names, the deadpan character dialogue, as well as the outrageous regional stereotyped accents to the saucy innuendo restaurant names, the pun-y achievement names, Kitty's hundreds of tailored quips in response to your play and the stupid situations and their ridiculous outcomes, [we tried] to make a lot of things a little funny so that nothing is so memorable that it becomes repetitive," says Franke.

Those reporting back from the front lines of portable gaming comedy seem to be succeeding when applying the existing conventions of designing any video game for mobile. Consider player expectation, think about the playing environment and never forget the hardware's conventions.

But if your confidence lies in gameplay design and not comedy writing, it can be intimidating to assume the role of comic.

Before you make a comedic game for any platform you first need to create a character that people feel connected to.

For those with that concern, Tung Nguyen-Khac, CEO of Spil Games – which has enjoyed much success with the decidedly daft Troll Face Quest series – has some practical advice.

"Before you make a comedic game for any platform you first need to create a character that people feel connected to and want to engage with," Nguyen-Khac points out.

"From there you need to figure out how to evolve humour as a personality trait of the character. To do this you need to create an environment from which the character’s humour can flourish and shine."

Arguably, this approach mirrors that seen in the wider process of making a game world convincing and consistent; something most developers necessarily have confidence in.

"In the case of Troll Face Quest the character’s funny and kooky look draws player’s in," he elaborates.

"People instantly start engaging and laughing as they get pranked while trying to outsmart the Troll character. And the level-based approach to the game sets up a new type of prank in different environments that players look forward to."

Again, with Troll Face Quest the jokes are integrated with the gameplay mechanisms; not just draped over them. And that is when comedy lends value and potential to games, rather than just novelty.

That value, of course, can come in myriad different guises. For Franke and his team, comedy let a knowingly playful game explore socially important issues.

"Comedy is disarming," Franke states. "You can hide a subtle but powerful message in a vehicle that appears flippant and silly. Our game is as much about diversity, positivity and respect for our fellow humans as it is about fart jokes and naughty double entendres.

"But we don't want to ram all that seriousness down people's throats, as that isn't fun at all. So we sugar coat it with comedy caramel, and lo and behold we get zero grief online about being feminists or gay pride supporters, and lots of lovely and diverse fans."

That's a success that could be hard to top. But making a living is certainly important to many developers, and comedy's power to engage certainly offers a way to make a commercial success.

I think it's the same challenge as making any comedy. The funniest things are often spontaneous and immediate.

Like all opportunities, of course, making mobile players laugh along with your game is based around a pretty daunting challenge: the ability to be funny.

"I think it's the same challenge as making any comedy," concludes Rumpus Animation's Burnett.

"The funniest things are often spontaneous and immediate. After two years of listening to [our game's protagonist] Bertram say the same terrible puns over and over I have to say it's a struggle to find him funny sometimes.

"There are a lot of scenes which have been extrapolated from a joke or pun I've thought up at 3am. It seems hilarious at the time, but getting it to work as part of a cohesive game takes deadly skills and determination.

"And I have to admit that it is a huge team effort. Despite me being the most important comedic genius behind it all, the games wouldn't be funny without the programmers, voice over actors, musicians – maybe not the musicians, they are pretty humourless – and everyone else involved in it."

Learning to be funny? That's a tough ask for some. But turning to your peers and colleagues? Therein lies what maybe the richest comedy seam you can tap as a mobile studio.

Mine that supply wisely and you might even find yourself laughing all the way to the proverbial bank.