Hidden object renaissance? The teams behind Hidden Folks and Under Leaves aren't quite so sure

The indies talk about shaking up the genre 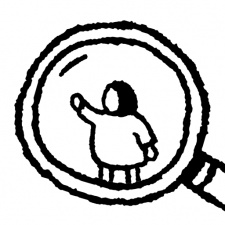 There was a time, perhaps around 2008, when hidden object games were de rigueur.

The genre was a perfect match for the birth of smartphone casual gaming, itself fuelled in the preceding year by the arrival of the iPhone. Suddenly, hidden object games were everywhere and many developers joined the rush to serve the form.

But as many observers of the day reinforced the message that 'casual' and 'hardcore' were the two opposed prominent gamer demographics, noses were quickly turned up at the revolution in accessible games.

'Casual' became a dirty word, and as such many a snarky dig was directed at hidden object games, which have roots in the 'wimmelbilderbuch' German picture books popular in the 1500s.

Perhaps because of that, hidden object games went rather quiet. They may not of gone away, but they have hardly enjoyed the accolades of a celebrated form.

Out of the shadows

Now, in 2017, a new kind of hidden object game has emerged, even if their creators never set out to disrupt the conventions of the puzzle subgenre.

Earlier this year the whimsical, beautiful Under Leaves delivered a hidden object game with indie chops, and shortly before that Hidden Folks wowed audiences with an abundance of character and delicate silliness.

We never intended to make a genre game with Hidden Folks.

But neither of the game's creators set out to make a hidden object game.

"We never intended to make a genre game with Hidden Folks," admits the game's designer, Adriaan de Jongh, who built it with illustrator Sylvain Tegroeg, and is currently readying the Android port.

"I accidentally stumbled upon the art by Sylvain at his graduation expo, was super intrigued by the intricate worlds he had created, and then immediately told him – jokingly – we should make a game together.

"The very first thing that came to my mind seeing his work was to make his drawings interactive and turn it into a searching game so that people would actually look carefully at his art. That was my starting point when I made the first prototype and that continued to be the core of the game."

Oddly enough, it's a rather similar story over at Circus Atos, creators of Under Leaves, who found an artist slightly closer to home.

"We were working on other game prototype, but we got stuck," reveals Michal Berlinger, producer, game designer, programmer of Under Leaves.

"So Bara Podhorska – my girlfriend and graphic designer– started drawing some monochromatic sketches of nature. It looked fine so I started thinking about gameplay. It had to be something easy, because it was also her Bachelor's final project."

Ultimately, the game was born from a practical consideration. The duo needed something that they could deliver in around a year, only working on it in their spare time.

"We took a look to some games that probably can be named as conventional hidden object, but we never liked how those looked and felt. I saw a demo of Hidden Folks on PAX East few months before release and we agreed that if we did hidden object, it has to be more like this."

That quiet disinterest in true hidden object games is not exclusive to Berlinger either.

"Sylvain and I never did research into hidden object games," confirms de Jongh. "And to be honest, I really dislike pretty much every game I've seen in the genre."

On a similar note, Berlinger adds: "Honestly, we are not such big fans of this genre. It was just logical that when we were looking for some easy game mechanic, that will let you look on the nice pictures and enjoy the atmosphere, we choose hidden object."

Perhaps that indifference in the traditional hidden object formula gave the studios the creative freedom to make something special, unbound by convention. That's what happened when the Sex Pistols upturned popular culture thanks to their apathy towards the conventions of playing guitars and singing.

That's not to say Hidden Folks or Under Leaves are punk works, or even deliberately irreverent. But both do pay little regard to the genre that strictly defines their creations.

Much of the previous criticism of hidden objects games, of course, has – unfairly or otherwise – pointed a finger at the simplicity of the form. Rarely described as 'elegant' or 'pure', the genre is sometimes assumed to be 'easy' to design.

Berlinger and Podhorska aren't so sure.

"It should be clever, and not just hard in that you just put something almost invisible in the scene. That is hard and dumb. And honestly, we fail sometimes with this in Under Leaves. For the next time – if ever – we should play more with the shapes than with the colors. And the second thing is adding something more around it. Some story, interactions, etc.

"I think Hidden Folks is a great example of where to push the boundaries of this genre. We don't have any story, nor additional interaction. But you probably always need something more than 'just hidden object'. In Under Leaves we focused on making a strong visual and audio experience, and on the calm and soothing atmosphere."

Over at the Hidden Folks team meanwhile, there's less of a sense that making hidden object games – at least in the traditional form – is a particularly nuanced design craft.

"In my opinion, Hidden Folks differs enough from the usual hidden object game for there to be game design challenges that you wouldn't find in hidden object games. Interactions are meaningful and based on the theme of the area.

"Things you need to find in Hidden Folks have clues and often require interaction."

And then there's that delightfully daft fan favourite in Hidden Folks.

"The game features 100% mouth sounds," states de Jongh. "The game works on mobile, but also on computers, with or without controllers. All these things we had to design, because there wasn't another game we could take a look at to be inspired by."

And that might be the secret to making a good contemporary hidden object game. Ignore the genre you are serving, and try not to look for inspiration. Hidden object games, after all, are not about looking for hidden objects. They are about interacting with paintings, photos or illustrations.

When several people come to one screen trying to find the last missing piece, that is really nice.

'Hidden object' as a term may just be limiting the genre. Should we, perhaps, expand it to include the MegaTouch 2000 pub machines that wowed Europe with a simple spot the difference game from 1997 to 2014?

And how does the line that falls between puzzle games and adventure games reasonably dissect the hidden object form?

Whatever the answers to those questions, it's safe to say that whatever hidden object games are, they remain popular.

As we learned in our recent interview with Legacy Games founder and HitPoint President Arielle Lehrer, Legacy Games still enjoys much success selling boxed CD-ROM hidden object games of the traditional form in Walmarts across the United States.

The reason for their popularity is somewhat beyond the fine folks at Hidden Folks.

"I really don't understand this," confesses de Jongh. "Most games in the genre are very uninspiring, lack quality, and tell boring stories. I think the clichéd answer to this question is that the people who play these games are on platforms that only serve these kinds of games, and so those people will never be exposed to all the good stuff out there."

It's a slightly unexpected angle from the creator of a beloved hidden object – or perhaps rather 'wimmelbilderbuch' – game. But that is the point of the best hidden object games. They are full of the unexpected, the magical and the surprising. At least, that seems to be the recipe for the new wave of credible contributions to whatever the genre is; or isn't.

Over at the Circus Atos, they have had some feedback that explains why a new form of the genre is thriving, and it might be the same reason hidden object games have always been popular, despite the snobbery sometimes directed their way.

"I see two things people are telling us," concludes Berlinger. "They play it with their kids. And most importantly, they play it together. When several people come to one screen trying to find the last missing piece, that is really nice. People feel great about this experience, and so we do as developers."

It turns out competitive online multiplayer isn't the only way to make a truly social, sharable game.