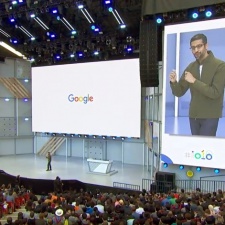 On a sunny day in the Silicon Valley, what better way to spend the morning than listening to Google’s latest drop of news, products and updates?

The annual Google event long ago moved to the outdoor Shoreline Amphitheatre, a concert venue near Google’s Mountain View campus in California, and the shift was finally rewarded with the warmest morning the event has yet experienced.

That warmth in the weather was echoed by a warm and welcoming feeling around the show, from the introduction of more accessible keyboard options for those with disabilities to an intro video extolling the benefits of building things together, Google was pushing the group hug theme right from the door.

Sundar Pichai, Google’s CEO kicked off the event by stating that the world stands at an inflection point for technology and admitted that: “There are very real and important questions being raised about the impact of these advances and the role they will play in our lives. The path ahead needs to be navigated carefully and we feel a deep responsibility to get this right.”

He went on to cite the benefits of using Google AI to solve healthcare problems and accessibility issues. He showed an example where Google AI was able to differentiate spoken words on a sports news program, disambiguating the closed captioning to show just who was actually speaking on screen.

Google Duplex, a natural language voice assistant, wowed the crowd with its ability to book a haircut and discuss a restaurant reservation.

Across Google’s product lines, Pinchai showed off AI-based enhancements. Google Photos can retouch photos, colourise black and white images, and even identify and clarify documents photographed with a phone camera.

The G-board onscreen keyboard is also being improved to include better word completion and even address completion capabilities to enable easier writing from tablets and phones.

While the underlying AI systems powering Google were laced into all manner of product enhancements, another theme was notable at the show: life management.

This manifested across the Android and YouTube platforms as optional time limits on usage, a greyscale “wind down” mode to wean you off your phone at night and statistics surfaced to the user to detail their time spent in each app.

Google launched a Digital Well Being site at the event to coincide with these new features. The Android P operating system, which was released in beta form at the show, now includes APIs for managing similar interactions within any application, giving developers a way to manage their user’s digital lifestyle.

Even Google Home got in on the act, with a newly added parental mode, allowing the device to require “Please” appended to every request in hopes of making children more polite.

Naturally, things got more nitty gritty as the day went on, and the Android updates were detailed in a second keynote in the afternoon.

Stephanie Cuthbertson, PM director of Android, detailed the numerous enhancements Google has made to its Android Developer Studio and Android P operating system. One of the primary updates was the introduction of modularized Android Bundles. Using the new bundle building system, coupled with the modular delivery system now baked into the Google Play Store, developers can reduce the size of their binaries with a few quick adjustments.

There are very important questions being raised about the impact of these advances and the role they will play in our lives. We feel a deep responsibility to get this right.

Sundar Pichai
Those adjustments would be made to the code using Android Developer Studio 3.2. This update includes a vastly improved emulator which can launch in seconds, thanks to memory snapshotting within the IDE.

Cuthbertson said that Kotlin has been a dramatic improvement for developers since it was added as a programming language to the Android platform.

“Since we made Kotlin a fully supported language, we’ve launched more and more support," she said.

Cuthbertson went on to say that developers have had a longstanding complaint about Android and that her team is addressing this issue with a new set of libraries called Android Jetpack.

“Android’s APIs could be easier. It’s said that on Android, there are six ways to do everything," said Cuthbertson.

"Today we’re announcing Android Jetpack, the next generation of Android APIs. This is a set of libraries and tools that set the basic DNA by including support libraries and architectural components.

"Jetpack brings this together coherently and adds even more libraries, Pages, Slices, Kotlin extensions across everything, and all of these libraries are backwards compatible with 95 per cent of devices."

Jetpack entered beta on Tuesday and offers a more direct path to building applications for developers who may be confused as to the current proper way to perform an action in Android.

The Jetpack project picks specific design options, such as JavaRX and Material Design UI elements. Jetpack also dovetails with the new Android Studio navigation editor which lays out an applications flow like a white-boarding diagram.

According to Cuthbertson, using Jetpack and Android Studio with Kotlin is saving developers up to a third of their time through automating a lot of the boilerplate code they write when building a new application.

Cuthbertson also detailed a few other additions to the Android P platform, including a single, easy to use API for background tasks, an energy profiler, C++ profiler, and an improved system trace.