As the year draws to a close, we take a look back with our pick of the stories that shaped the last twelve months. This time, we zoom in on February 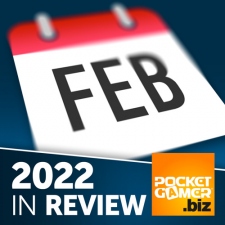 2022 was a year of big news and even bigger industry movements. Mobile gaming was no different. Here are the stories that set the scene back in February 2022.

India and China have had an ongoing mobile battle all through 2022 as one side sees their mobile lead be questioned (China) while the other only seems to be on the rise. The tit-for-tat exchanges have only led to heightened awareness about privacy concerns, mainly concentrating on Chinese companies with many developers and publishers being dragged into the debate.

All this led to Garena facing the prospect of their games Free fire: Illuminate and Free Fire Max being pulled from storefronts in India, after they had accrued 238m downloads in total. The battles marked only the beginning of troubles that companies faced from regulators through 2022, with Garena and Krafton facing the brunt of the grief due to their ties to Chinese companies.

We couldn’t resist dropping a story of our own in here. For better or for worse, Covid restrictions at the tail-end of 2020 and into 2021 lifted significantly. PGC London was in-person for the first time since 2019. Delayed from our usual January slot… But back fighting fit in February! It was great to be back with a wealth of global attendees, meet-up opportunities and on-site talks.

In-game monetisation was the hot topic, with the upcoming metaverse and ongoing possibilities of blockchain technology setting the agenda.

Want to find out what’s hot for 2023? We’re doing it all again in our biggest and best PGC London event EVER on January 23-24. Get all the details you need right here.

Blockchain gaming has been on quite a ride through 2022, inevitably tossed and turned on the storm sea of crypto concerns and FTX-sized disasters. But back in February such worries were unlikely blips on a golden future ahead.

Take Coda and their Infinite Arcade concept which launched in February with 10 initial hypercasual games that integrated play-to-earn mechanics. This would lead to a partnership later in the year with YGG SEA to further promote this gaming concept.

The big story this year for Zynga was, of course, their acquisition by Take-Two. And the love went both ways as a look at the balance sheet revealed that the deal meant that, for the first time, Take-Two were making more money from mobile than their traditional console and PC platforms. With the Microsoft/Activision-Blizzard deal still stalled, this may turn out to be the largest of the year.

But 2022 was a mixed bag early on for Zynga. Despite record high sales they also saw record losses, which indicated the company was stumbling on its footing. The acquisition by Take-Two can only provide more stable ground to support Zynga in the longer term.

Integral (or intrinsic) game ads are back. Blazing the trail were Anzu, who partnered with Dakar Desert Rally for a series of in-game adverts to appear on road-signs and other areas in-game.

It’s a unique, interesting and unobtrusive way of bringing advertising into games in a style that fittingly found favour in real-life motor racing. Now the in-game landmarks and bill boards feature up-to-the-minute ads from Anzu’s partners in much the same way that Petronas and Santander love to buy logos in real-life Formula 1.

Do you have a favourite mobile story from 2022? Take to Twitter with the hashtag #PocketGamerYearInReview to tell us your highs and lows of the year.

Want more? Get our pick of the best stories from March here.