The Wright Stuff: It should be a connected mobile world

The mobile games veteran wants to reach out and touch faith... well, other mobile gamers 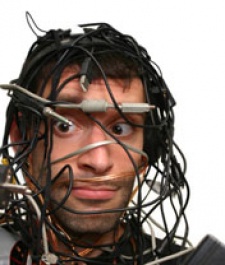 August 2nd, 2008 - 10:00am
By Chris Wright
Unlike any other game-playing device, the mobile phone is 100 per cent connected. Indeed, the simple fact that someone has downloaded a mobile game means we can be sure they've worked out how to connect their phone to another device/server and pass data between the two. This should give the mobile industry a massive opportunity to deliver exciting connected games and applications, making the mobile phone a lot more than a poor man's GBA.

So why are there almost no connected games?

Actually, this is quite a complex problem with each of the three main types of companies that make up the mobile games industry copping some of the blame.

As ever, the network operators must shoulder a lot of the brown stuff. Most of them have done their best to make connected gaming difficult to implement because of short term considerations; namely, they want to maximise revenue.

Of course, this is what all companies want to do, but because operators charge for every byte of data that is sent, it makes the price of playing connected games very high for any gamer who's not on a flat rate contract. This massively reduces the number of people who will get involved in connected games, as well as reducing the viral marketing effect that would be required to take connected mobile gaming mass market.

Even where operators have encouraged connection, it's purely focused on high-score tables. A high-score table that tells me I am the 53,243th best player in the world is not only of little interest but actually discourages me from playing.

Finding out how I compare against my friends would much more interesting  as well as driving viral marketing  but it would also require operators to work out industry-wide standards. As for the concepts of multiplayer games, extra downloadable content and online chatting, these seem to be a complete mystery.

So it's not easy to get a connected game launched. For this reason, rather than attempting to drive the future of their industry, publishers take the easy route and simply commission single-player games. This lack of vision means very few connected games make it to market, and ironically this is especially true of the big publishers. Most of the connected functionality to date has come from the small guys.

But publishing should be able taking a risk  a calculated risk, sure  but a risk that has the potential to expand the overall market nevertheless. Unfortunately, publishers  and especially those floated on a stock market  prefer a safe bet based on short term goals.

As much as the operator and the publisher, developers seem happy to turn out the same old games without pushing the boundaries. I think this is because many mobile developers want to be console developers, so they try to push general games areas such as graphics rather than the things mobile devices are actually good at.

Still, designing and developing a compelling connected game is extremely hard and potentially would be something that would risk the financial stability of most mobile developers, which is why most are happy to create yet another action platform game based on a movie licence.

So what's the answer?

Simple. It's all about co-operation. Network operators need to put in place the infrastructure to support connected games, zero-rate the data, set up certification standards and, most importantly, ensure cross-operator interoperability. They need to see the big picture.

Publishers need to see connected gaming as an opportunity to differentiate themselves and make mobile a more compelling experience. They need to see the big picture.

Developers need to be innovative and be prepared to take a creative risk. Once, again, it's all about the big picture.

He thinks his greatest achievement was attending the last real E3 (2006), while his greatest regret is coming back this year to E3  as one publisher described it to him  post apocalypse. He can be contacted at chris[at]gamesconsultancy.com