The mobile games veteran tells it how he holds it 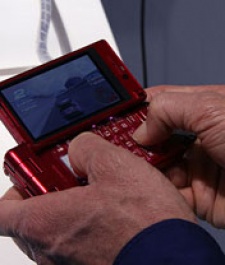 September 13th, 2008 - 10:00am
By Chris Wright
On one level, it could be argued that the success or failure of a game machine is almost completely dependent on the player interface. Nintendo remains the master of creating the ultimate game controllers whereas Atari was probably the worst  anyone else remember the Jaguar controller and the Pro stick?

In fact, the controller is so vital to the enjoyment and accessibility of games that it's hardly surprising otherwise great consoles have died because of the wrong choice. Unless you get this aspect right, it really doesn't matter how good the actual games are, no one will play them. Fighting a bad controller is one of the worst experiences you can have, especially when you know there's a good game desperately trying to get out.

Mobile phones are primarily designed to allow people to make phone calls and their design is good for that simple task  although what Nokia's design staff were thinking of when they made the 7600 is anyone's guess.

But if mobile games are going to be anything more than a niche form of entertainment for masochists then phone manufactures need to think more seriously about how their devices will be used to play games.

Even the N-Gage phones, which presumably are specifically designed to play games, are terrible. Take the N95, for instance. Watch anyone trying to play a game on what is a very powerful piece of hardware and within two minutes they will hit the app button situated next to the joypad and have switched themselves out of the game and back to the main menu.

This is the reason the Xbox task switch button is well away from all the other controls. It's something even Sony managed to get right on the PlayStation 3 DualShock so it can't be that hard. What was Nokia thinking, or did no one attempt to play a game on its latest gaming phone?

Phones aren't ever going to be ideal for playing games on, but manufacturers seem to be going out of their way to make the act of game playing a horrible experience.

Another example. Sony Ericsson keeps making its buttons so small and difficult to press that playing a game becomes an excruciating, hand-cramping experience, and this is before we get onto the subject of all these touchscreen phones desperately trying to look like iPhones.

Of course , innovations such as motion sensors, the touchscreen and mobile controllers like the Zeemote could help, but fundamentally the people who design phones just need to spend a bit more time thinking about how their latest creation can improve the gaming experience.

Is that really too much to ask?