The NimbleBit brothers on boutique success

October 29th, 2013 - 03:27pm
By Jon Jordan, Contributing Editor
Starting out in simple monochrome in the days of Snake and WAP, the past decade has seen the mobile games industry kaleidoscope into a glorious, multi-billion dollar sector that's driving global innovation.

Defining the very essence of indie mobile gaming success, the Marsh brothers (better known as US developer NimbleBit) were early onto the App Store and early to embrace the potential of free games.

The release of Pocket Frogs in September 2010 has been followed by signature titles such as Tiny Tower, Pocket Planes and most recently Nimble Quest and Pocket Trains, demonstrating that David and Ian still balance their characteristic pixel art style and indie design sensibilities, with critical acclaim and commercial success. 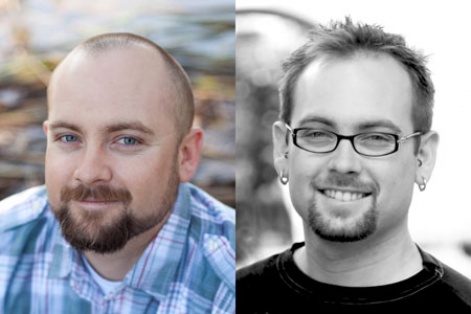 David Marsh: Definitely a lot of summers spent playing Mario Kart and GoldenEye 007. On the PC I remember playing a lot of Fallout, SimCity 2000, Age of Empires II, Command & Conquer: Red Alert and Half-Life and its many mods.

Ian Marsh: The fondest gaming memories I have during childhood consist of playing Mario Kart (SNES and N64), GoldenEye 007 and Half-Life.

One day I remember sorting through the PC games at CompUSA and finding a special copy of Quake that came bundled with the level editor called Worldcraft. I took it home and started experimenting with the editor which was had so many features and capabilities I was completely engrossed.

Soon after, Half-Life came out which used the same level editor - and once I discovered the community built around creating levels and mods for the game - I was totally hooked.

Ian: When I was in High School I learned how to program in Flash. After I coded my first few interactive toys I was hooked and knew this was something I enjoyed doing.

David: My first taste of the industry was when I made some custom maps for the Half-Life mods Counter-Strike and Day of Defeat that got purchased by Valve when they spun off the mods and retail games. As someone still in high school, the idea of having something I made be a part of something that was on the same shelf as all the other games was amazing.

After high school, I got a job at Troika Games making levels for Vampire: The Masquerade - Bloodlines. It was an incredible learning experience that taught me a lot about how game development works, as well as the game industry in general.

Ian: Out of college I got a job at a small studio doing licensed non-smartphone game development. Mobile development pre-iPhone was especially painful due to poor hardware and having to work with carriers and license owners.

The studio fell on hard times after a few years and we left for greener pastures after a few missed paychecks. The studio went on to eventually be absorbed by EA and then Zynga.

David: I think my first taste of success was when some of my custom levels for the Half-Life mod Counter-Strike got bought by Valve and made it into an actual retail product. That was when I thought I actually might be able to turn game development into a career.

Ian: Out of college I got a job at a small studio doing licensed non-smartphone game development. Mobile development pre-iPhone was especially painful due to poor hardware and having to work with carriers and license owners.

The studio fell on hard times after a few years and we left for greener pastures after a few missed paychecks. The studio went on to eventually be absorbed by EA and then Zynga.

David: The potential for mobile games didn't really become apparent to me until Apple opened up the App Store and developers started flooding it with all sorts of different content. The fact that thousands of bedroom developers now had an outlet for their creations that could be in everyone's pocket was a pretty big shift in the industry.

Ian: The first time the light really clicked for me was when Apple released a handful of games for some model of the iPod. I quickly bought them all and was impressed at how much better the experiences seemed than the average cell phone games of the day.

I tried to convince everyone in the office that we should pursue making iPod games, exclaiming "Just think of how many people are walking around with iPods in their pockets that can play these types of games!"

David: I think the opening of the App Store has been the biggest event in mobile gaming so far.

Ian: I think it has to be the introduction of the iPhone followed by the release of the App Store in 2008. If the App Store was never released and the platform had stayed closed, we would be living in quite a different reality today.

David: I'm most proud of the fact that we have been able to spend our days playing and experimenting with mobile game development, and that we have built an audience of people who enjoy the fruits of our labor.

Ian: I'm most proud of the personality we've been able to put into each game and the resulting fan base we've created. It is pretty humbling knowing people are looking forward to what you create next. No regrets yet!

David: To be honest, I don't play many other mobile games. When I am playing something on my phone, I'm usually testing our own games.

Ian: Lately I've been spending most of my free time playing Animal Crossing: New Leaf on 3DS, which being a Nintendo game isn't available on mobile platforms. It should would make an amazing mobile game though!

Ian: I think most big games will be available on most major platforms as more and more developers adopt cross-platform engines. I think we'll also see a resurgence in the importance of publishers and brands as the supply of quality games becomes overwhelming.

David: I hope that we can help influence other platform holders to be more liberal with opening up their platforms and letting all the little developers out there have a stage.

Thanks to David and Ian for their time. You can follow NimbleBit via Twitter at @NimbleBit or David at @NimbleDave and Ian at @eeen.

And if you have a suggestion for someone you think should enter our Hall of Fame, please email jonathan [dot] morris [at] steelmedia [dot] co.uk.