Hot Five: Clash of Clans on Android storms the site, Jagex talks up mobile, and Apple loses control of the App Store 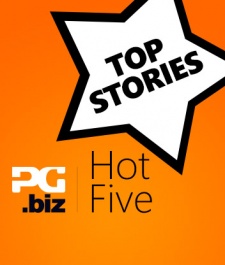 Games as a Service will be 'table stakes' from 2014, says Glu

Also on the agenda, however, was the question of developer diversity.

"It's easy to take a cookie-cutter approach that takes advantage of a popular genre," he said.

"Assuming you can do that on a small budget, it could end up being an ROI positive effort. But chances are, it won't have a long shelf life.

"However, if a developer is willing to invest more aggressively to create something unique, there's a better chance of that game being around for a few years."

Calling all indie devs: Pitch your games to the press in London this October

Following on from the successful Big Indie Pitch held in Cologne, we're now doing it all again.

The Big Indie Pitch puts a group of journalists round a selection of tables, then has developers stroll in and pitch an idea. After five-minutes of discussion, the developer swaps business cards, then moves on to a new table.

The event is completely free and great way for developers to bounce around ideas and gather feedback.

The Bit Indie Pitch will take place in London on 23 October, from 2pm to 4:30pm.

Getting in the game: Jagex reveals why now's the time for a major move on mobile

Having made its first major move on smartphone, last week saw us catch up with Jagex's marketing manager Robert Kinder to discuss the launch of the firm's most recent mobile release, Carnage Racing.

According to Kinder, the likes of Mario Kart, Burnout and Carmageddon all served as inspiration, though many of the team comprise of former Rockstar workers  specifically from Midnight Club.

"The development team are predominantly ex-Rockstar developers, all of whom worked on the Midnight Club franchise, so their heritage and expertise is in racing games," said Kinder.

"Interestingly, the game was actually their idea  born out of a love for racing, but made to fill a gap we felt had widened since more arcade-orientated racing games had fallen from popularity in favour of realism and licensed vehicles."

Are mobile game in danger of stagnating? Are we just seeing the same titled resprayed and repackaged with a different name?

148Apps's Carter Dotson thinks that both the App Store and Google Play "seem to be frozen at the top."

"There's a lot of large, well-established studios behind these games, and given their ability to market them, it's hard to see this changing," he stated in last week's Stateside column.

"This is a big problem for everyone else working in mobile: the big players are settling in, perhaps finding for the first time the consistent formulas necessary to win big on mobile."

Carter believes that what made mobile such a beloved placed to be was that in 2008, when the App Store was released, studios had to innovate to find reward. But in 2013, variety isn't the spice of life, and the big earners are being constantly cloned.

Supercell set to launch Clash of Clans beta on Android

Supercell has quietly rolled out a beta version of Clash of Clans on Android. Furthermore, there's now even an Android page for the former iOS-only juggernaut.

The news came from an unlikely place; a popular Clash of Clans YouTube commentator who says he received word directly from Supercell.

Perhaps more interesting, however, is the fact that this is the second week Clash of Clan's pending launch on Android has featured in our top five stories - the story actually rising one place to top spot during the last seven days.

If that's not a sure sign that Clash of Clans is set for a more than successful run on Google's platform, we don't know what is.