And get Oprah'n'Ashton into social gaming... 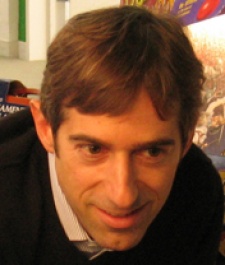 June 15th, 2009 - 02:10pm
By Stuart Dredge, Contributing Editor
This week's release of the iPhone 3.0 software has been hailed by developers as a big step on for Apple and iPhone gaming, not least because of the new ability to make money from in-app payments.

However, Mark Pincus, CEO of social gaming firm Zynga, isn't putting up the bunting just yet. "For us, the jury's still out on how well the platform is going to monetise," he says.

"We're super-excited about the platform for its ability to get to a whole group of consumers who we might not get to through the web and social networks. But the part that's below my expectations so far is that monetising the platform effectively is still elusive."

The company started off making games for social networks, though, and part of the problem that Pincus identifies on iPhone is that "the directory model just doesn't scale the way that social networking does."

What he means is that on iPhone, application discovery is handled through the App Store, meaning people are combing through 50,000 apps to find the good stuff - helped admittedly by various charts and editorial content.

By contrast, app discovery on Facebook is inherently social - people find out about games and apps when they see their friends using them.

"We're hopeful that on iPhone, some of these user-to-user communications channels will evolve that will enable better game discovery, and make it easier for people to have social gaming experiences," says Pincus.

"A directory model doesn't scale to millions of people with different interests. You have the 25 most popular apps, but popular to whom? If you want to know what your friends are playing, the Facebook distribution model scales a lot better."

Pincus has forthright ideas about how Apple could promote social gaming on the iPhone, and they build upon the company's partnership with Facebook, which saw the launch of Facebook Connect for iPhone earlier this year.

"Apple is the world's greatest product company, but I wish it embraced social networking and social gaming more, and used it to market iPhones," says Pincus.

"For example, I think that the platform and social gaming would be further along if Apple baked FBConnect into it much more deeply. I wish when you registered your iPhone, it asked you right then if you have Facebook, and if so, do you want to turn it on? And then it would be turned on period, rather than having to turn it on in every app. I could choose to turn my springboard into an always-on always-social mobile device!"

He also suggests that there should be a shared API among iPhone developers that lets them share known lists of people with iPhones.

What would it be used for? "Firstly I could tell you 'out of your address book, these eight people have iPhones', but it would also open up iPhone games discovery," he says.

"Maybe you could just browse whatever apps your friends have, which could be done by a third-party. Or I could let you invite all your friends who have an iPhone to play a particular game. It opens up this person-to-person level of application discovery. We would be very open to partnering with the industry on something like that."

Back to those in-app payments, though. Zynga has more experience than most in this area - it's been reported (although not confirmed by the company) that Zynga is making $100 million a year from micro-transactions in its non-iPhone games.

iPhone devs are hoping to make big bucks from in-app payments, so what does it take to be successful with this kind of business model?

"Developers have to reorient their thinking: you make money because you create a service and people come back to it for a long time - and because they have this perception that they're going to be involved for a long time, it's worthwhile for them to buy currency or goods inside your service. It's very different from the download or product sales business, which is very one-time transactional."

Specifically, Pincus says that companies are going to have to measure themselves not in number of downloads, but in their number of daily active users (DAUs in Facebook-speak), which means shifting their resources.

"Everyone's going to have to up their thinking from downloads to DAUs," he says.

"For some companies, it's like retooling Detroit to go from making big SUVs to little electric cars. With an always-on service, your development cycle really begins with the launch of your product. In a social gaming service, 20 per cent of resources go on launching a product, and 80 per cent is post-launch."

Zynga has been busy recently, recruiting five new executives with backgrounds at companies as diverse as Yahoo, NBCi, Yandex and Electronic Arts.

Pincus describes Zynga as having three core disciplines: game production, ecommerce and web development, and then social media, with the recent hires bolstering the company in all three areas.

"Plus we've been getting pretty senior people - people who know something about management," he says. "It's often overlooked in startups how much you need people who really understand how to manage people."

So what will be the key growth drivers in its business in the next year? Pincus identifies quality as something Zynga intends to place renewed focus on.

"It's the number one thing I want to see our company drive over the next 18 months," he says.

"To focus across the board on a consistent and scalable quality, which means a process-oriented commitment where we develop more metrics that measure quality, and processes so there can be feedback loops, so those metrics are in people's roadmapping."

He talks about the idea of "social home runs" too - experiences that could bring home to people the strengths of social gaming. And this brings us back to iPhone, which Pincus says could supply some of those social home runs with its 3.0 software.

"For example, you're stuck at Heathrow or Gatwick and your flight is delayed, so you open up your iPhone and see in your springboard deck next to poker that three friends are playing now," he says.

"So you click in and you're playing poker with a long lost buddy or college room-mate. That to me is a social home run, some kind of breakthrough. We need those breakthrough experiences in social gaming. If it can get out to a mass market, social gaming will cross over the way Twitter just did."

"I want to see social gaming on Oprah! I want Ashton Kutcher on Oprah playing poker with Demi Moore and Evan Williams on his iPhone! That would be cool. And Obama too..."