The inspiration behind Ompass World Cities 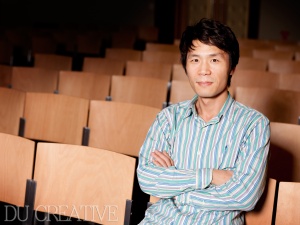 December 26th, 2009 - 09:05am
By Chris James, CEO
The Samsung Application Store Developer Challenge 2009 brought together some of the world's top mobile development talent, all vying to scoop a chunk of the $330,000 prize money.

Now the votes have been cast, the results are in and you can browse the full list of winners over on the official site, or simply read on as we interview the Platinum prize winners.

The winner of the main $100,000 prize for the best English language app was Korean outfit HyongaSoft, with its Ompass World Cities. We caught up with CEO Sukhyun Shin. You can read our interview with other Platinum winner DDM here.

Pocket Gamer: How do you feel about winning this prestigious prize and what are you going to do with the $100,000?

Sukhyun Shin: First of all we are very glad to have a chance to advertise our company's name and our breakthrough technologies, even though we're a just small start-up. We're also happy our Ompass series, like our Omniano series (Piano concert, Flute concert, Motion drum), appeals to many people.

Regarding the money, we will invest in technologies to develop more fun and useful apps for everyone. Why do you think Ompass World Cities won?

We made the most of the hardware such as GPS, accelerometer, compass, vibration and camera which are included in the Samsung Omnia II (GT-I8000) device. And we made sure the way we used the interface didn't get in the way of the technology.

The UI made for a better user experience that's well suited to the interface of Samsung devices. I think that's why we scored so highly.

What inspired you to make Ompass World Cities?

Thanks to the rise in mobile technologies and access to free internet, augmented reality is one of the key new fields for smartphones so we've been studying it for a while.

In addition, the next version will provide detailed city life information for each city. This means that users can see how far away the subway, airport, restaurant, theater, museum or park is by turning on the app. What was the most difficult part of developing the app?
Ompass World Cities uses a lot of hardware so the balance between system performance and getting the app working was the hardest process. And because the Omnia II uses sensitive sensors that are affected by surrounding conditions, we had to overcome many trials and errors.

More than anything else though, we couldn't get a GT-I8000 device in Korea. Thankfully, some people within Samsung Korea helped by lending us their device for a week, so a week is all we've spent on testing. It was difficult to complete the app in terms of compatibility testing in this short time.

What part of the app are you most proud of?

When we started out, the concept of augmented reality on the Windows Mobile platform seemed like an impossibility. Fortunately Samsung launched Omnia II in Korea in the nick of time and we decided to grab the chance.

Most of all we are very proud of maintaining the balance and spreading the performance requirements that can be a burden for the OS and app by making the best use of the excellent hardware performance.

And that fact that everyone who uses this app in real life is satisfied makes us very happy. Can you explain a little about HyongaSoft?

It all started with the release of Omniano The Band about a year ago. At that time I was working as an individual developer while also working for a book publishing company that had nothing to do with smartphone apps. I had strong confidence in the smartphone and its marketplace though so I had been preparing with market analysis and collecting technology data for years.

This led to me to the Omnia application competition in early 2009 and we won a gold prize with the app named Omniano The Band. This enabled me to finally start a business as HyongaSoft in August 2009.

Since then, the Omniano series have been upgraded as Piano Concert, Flute Concert and Motion Drum with enhanced features and have become very successful apps in the global marketplace.

What do you think of the Samsung application store and the Bada platform?

We started with Samsung apps as its smartphone market share is increasing and its Bada platform offers the advantages of smartphone with the familiarity of Samsung's popular feature phones.

Crucially, Samsung's application store supports apps from many platforms including Windows Mobile, Symbian and Bada, and also offers advantages to developers in terms of the SDK and support through Samsung Mobile Innovator. All this means developers can enter the marketplace more easily.

What do you think about the current state of the mobile applications market?

Although HyongaSoft is only a five month old start-up, we've been preparing to enter the fastest growing sectors of the smartphone market for a very long time.

We say "the festival just started". This means there's more expected value, many chances and possibilities ahead. From 2010, many platforms and devices will vie with each other for victory. In this sense, we're ready to become a global star company.

We started our business with the support of Seoul's 2030 Youth Start-up Project, and since then we've been building up our technologies around smartphone apps (mostly Windows Mobile platform), and exploring the possibilities of marketing and distribution to global marketplaces and making partnerships with developers and business partners all over the world.

Now we want to be a pioneer of smartphone apps which make people happy through our technologies, marketing and partnerships.

Finally, is there anything else you want to say?

First of all, we would like to thank Samsung for giving us this opportunity, and also thank Seoul's 2030 Youth Start-up Project team who gave us a chance and space to start a business.

And we're most thankful to our customers all over the world who enable us to make these apps. We'll do our best to repay this big prize with more useful and fun apps.

Thanks to Sukhyun Shin for his time.

You can check out what Hyongasoft gets up to in future via its website.