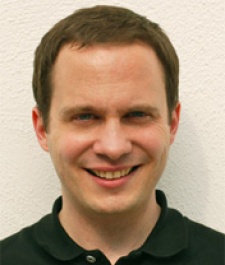 May 18th, 2010 - 02:20pm
By Jon Jordan, Contributing Editor
Following the news that Scoreloop is adding 300,000 users per week from just two games on the Android Market, we caught up with CEO Marc Gumpinger to find out more about the social gaming network's future cross platform plans.

Pocket Gamer: How surprised are you about the response you're getting on Android?

Marc Gumpinger: I never dreamt that the traction on Android would be so much higher than on iPhone. There's so much activity there.

We're still supporting iPhone of course, and have just signed up two new publishers that we will announcing shortly, but Android is big. People totally underestimate it.

These are free games right?

Yes. There are a lot of users and Android devices but the payment mentality isn't there yet. That's because Google Checkout is still very limited. Everyone's waiting for Google to change a couple of things, which will change this.

But this is good for us, as developers can use our Coins in-game currency system to fill the gap. Our model drops in very easily. Boolba Labs, the developer of Toss It, uses the Coins system.

If you're a developer for Android, you have to be passionate about the platform. It's still the case that iPhone is the focus for most developers, so if you're developing for Android, you've really got to love the device.

It's great talking to those guys though. They tend to be longtime mobile developers with a solid technology background and they're approaching us proactively. Boolba Labs integrated Scoreloop into Toss It in a couple of days with hardly any input from us.

What advantages do you see on Android?

Google allows for a lot more openness, even in terms of enabling people to create their own app stories.

I think there's going to be some interesting things happening in future. It's a lovely playing field.

Are you seeing any cross-platform Android/iPhone games yet?

Not yet. Our Bug Landing game for Android and iPhone shows people do play across platforms though. It's also the case that it's very unlikely all your friends are going to be using the same mobile operating systems, so if you want to be social, there's no alternative to being cross-platform.

How has going cross-platform changed the way Scoreloop works as a company?

We've been quiet for a while recently because we've been taking everything we've learnt from iPhone and taken a couple of steps backwards to turn Scoreloop into an open platform that means we can support other platforms very quickly. This was a very valuable process for us.

When you go cross-platform there are lots of issue to deal with, both technical and logical. For example, on Android, there's no in-app purchases as with Apple's App Store, so you have to think about how to deal with such issues. It was definitely worth it though, and we'll be talking about the new platforms we're going to support in the coming months.

Something else you've been quiet about is the whole 'X million users' that competitors such as OpenFeint announce?

People are fixated on the numbers but if it consists of 90 percent UDIDs, it's meaningless.

Thanks to Marc for his time.