Look out Mario and Luigi: the 'fat, beardy' Pickford Bros. are back, building their brand

Why mobile was a magnet for Magnetic Billiards' creativity 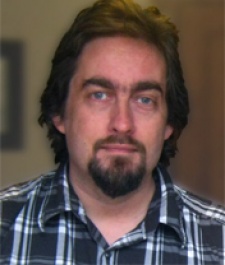 July 26th, 2011 - 08:31am
By Keith Andrew
News of developers breaking away from big publishers to have a crack at something more creative on mobile has become a regular occurrence of late.

John and Ste Pickford (better known as the Pickford Bros.) have been been working on their own IP for years now, however.

Their former Manchester-based studio Zed Two  later picked up by Warthog Games  worked on big licenses and IP aplenty for just such publishers. Yet, it was the PC, rather than mobile, that benefited first from the freedom their new studio Zee 3 granted them in the form of 2006's Naked War.

Only now, almost five years later, have they launched their first smartphone title with the release of Magnetic Billiards: Blueprint on iOS.

We caught up with John to find out what caused this move on mobile, and why he's wary of betting the farm on Apple's platform.

Pocket Gamer: Why the leap onto iOS now?

John Pickford: Well it's a way to reach a potentially huge audience, and the platform is relatively open in that we don't have to ask anyone's permission to make the game. Nobody is going to prevent us from releasing our work because it isn't to their taste or doesn't fit a portfolio.

Previously we were developing a version of the game for PC, but we felt nervous about depending on gatekeepers like Steam liking our product. We still hope to bring the PC version to market, but I think that will be a whole lot easier on the back of a successful iOS title.

Also, we felt Magnetic Billiards: Blueprint was a particularly good fit for the iPad and, as it turned out, it plays really well on iPhone too.

It's been great to be able to put lots of silly, fun features into our game without worrying about pleasing a marketing committee or publisher. And it's even better to see people enjoying that stuff post release.

How did you find the App Store submittal and approval process?

Initially quite stressful. We had a bit of hiccup in that Apple approved the app but not the in-app purchases, so we had our game available for nearly a week with no way to earn any revenue and a growing band of players who couldn't access the bulk of the game.

Next time we'll make sure the in-app purchases are approved before we submit the game. Lesson learned.

What expectations do you have for Magnetic Billiards: Blueprint?

The hiccup with the store means we don't have a clear picture yet, but it's so far so good, and the vast majority of sales are for the Skeleton Key in-app purchase, which shows we aren't hindered by the 69p/99c barrier.

In terms of critical response, it's been way beyond what we dared hope. We must have over 100 five star ratings across the various stores, and 70 or so glowing, written reviews. As I've been been answering, our two first reviews on major websites have appeared  both great.

What made you decide to adopt the freemium model?

We talked to a lot of developers about their experience and the general feeling was the freemium model was the way to go.

We've seen quite a few good games struggle at the 69p price point, so I think we needed to remove even that barrier if we were going to get a lot of people to try our game. This is really very similar to the old shareware model, which worked so well for titles like Doom.

One of the game's in-app purchases allows users to unlock levels in one swoop with a key. Is there a risk users will choose to unlock levels purely through play and keep their wallets closed?

The unlocking is really a minor part of the game. It's a kind of McGuffin we introduced to show that the game is very much about replaying levels rather than solving the puzzle and moving on.

It's really just an incredibly gentle form of grind which will have you playing each level a couple of times at least before you unlock the next - unless you're getting S ranks from the off.

The Skeleton Key IAP just gives you a little optional tool which you can use to bypass that if you so choose. We also throw in all the other IAPs as bonus - including any future content and access to prototype modes.

Yes, there's a risk that people will be happy with the free content and never buy anything more, but maybe those people will tell their friends about the game. We like the idea that lots of people are playing it, even if they aren't all spending money.

A lot of indie studios serve up compelling games but fall down when it comes to promotion. How have you pushed Magnetic Billiards?

Well, this is the big challenge and we're new to this.

Pre-release we mainly used Facebook and Twitter to get the word around. Post release, we're doing as much press as possible and shouting about the game to whoever will listen.

Both you and Ste feature prominently throughout, popping up in between levels offering tips. What was the thinking behind that?

There are a number of reasons for doing that. Not least, we thought it was funny to have fat, beardy dev types popping up instead of the usual cartoon animals.

Slightly more seriously, it's about authorship and making something that couldn't be separated from the people that made it. We've been in game development for about 26 years and despite creating many games we own very little of our IP.

Traditionally, when you accept publisher funding they tend to take the IP as part of the deal. Even when our studio had managed to retain IP ownership, it only took a couple of publishers to stop paying for whatever reason and all of a sudden we had to sell up and the IP was of course part of that.

What we are doing with the Pickford Bros. as a brand is creating something that inextricable from ourselves. We aren't running a huge staff or other big overheads. We aren't going to go bust and our IP will never be for sale. We might not get rich either, but at least we'll be making games that we believe in and the game you see is the game we set out to make.

It's been incredibly gratifying in the last week or so see that a lot people really appreciate what we're trying to do.

We've got a couple of products in the pipeline where we are collaborating with very talented developers - and in one case a musician - and we plan to feature those guys prominently in and around the games as well.

You've obviously spent much time on Magnetic Billiard's overall presentation. Has that had a factor in the game's take up?

The reaction to the visuals has been a pleasant surprise. We were half expecting a negative response as the game doesn't really have that lush, colourful, cute look of most iOS titles.

We went with the simple style in order that the focus would be on the gameplay rather than the eye-candy so it's really nice to find out that a lot of people really like the visuals.

The game is already available as a universal app for both iPhone and iPad. Any chance of further releases on rival formats?

We don't have any immediate plans, but if Magnetic Billiards is a big hit we'd be silly not to consider it.

There are only two of us, so we feel our time is better spent making the game as good as it can be rather than spreading ourselves thinly across multiple platforms.

Is there a danger of developers  independent developers in particular - becoming too reliant on iOS?

Yes. It's never healthy for one entity to be come too powerful, so clearly it's important that Android and Windows Phone exist as significant competition for Apple.

That said, porting games to lots of platforms is time consuming and expensive. I keep hoping the magic elves will do that for me overnight.
Thanks to John for his time.

You can find out more about Magnetic Billiards: Blueprint over on the studio's website.