Sees more value in a Tapjoy model than a Chillingo one 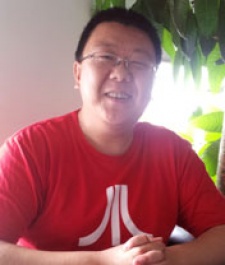 September 6th, 2011 - 08:31am
By Chris James, CEO
As with many things in China, first impressions can prove deceptive.

When meeting Gary Liu, the unassuming COO of CocoaChina, he's enthusiastically animated and sporting an Atari shirt. He could easily be mistaken for a fanboy or junior coder.

Likewise, when he talks about the early days of CocoaChina, it seems a little unfocused.

The reality in both cases is somewhat different, however. Although too humble to suggest it himself, his colleagues point out that before launching CocoaChina, Gary had already been a single digit employee at two Nasdaq-listed companies.

What's more, with a community of some 90,000 developers and several million page views a month, an investment round of $14 million, plus a conference this year attended by over 1,000 people, including Pocket Gamer - not to mention a top 20 iPhone game - CocoaChina is rather more than just a blog.

Suffice to say, we were keen to hear more as we asked Gary and his colleagues about their experiences to-date and plans for the future.

Pocket Gamer: Tell us a little more about your background?

Gary Liu: I was the first employee of Oak (famed for Renren, a Chinese version of Facebook). I worked on aspects such as marketing, product design etc. After that I worked in a mobile services company and then went to Youku (a Chinese version of YouTube, also Nasdaq listed). I left because I wasn't well and whilst resting at home, I started coding to pass the time. 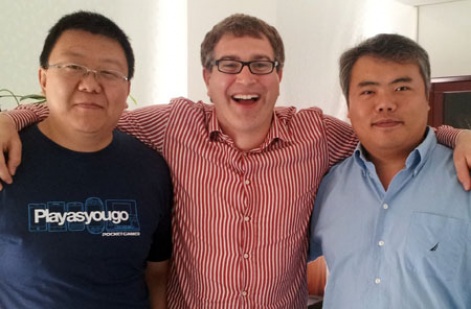 I had a Macbook and needed a music player. I couldn't find a good music player so I wanted to write my own. I searched around and didn't find any Chinese documents on how to develop Mac applications (I checked Apple's documentation and it wasn't easy to learn). So, I started reading and writing posts and thought, there must be other people like me who are also struggling so I started a blog to help people.

Did you realise the commercial opportunity?

In the beginning, we wanted to help people with technical advice about Macs. When the iPhone become available, a few people started developing on jailbroken devices before the SDK and App Store were released.

Actually, if you wanted an iPhone in China, you had to jailbreak it. So when people were searching for information, they used the terms 'Cocoa' or 'iPhone development' and as our website was first on the list, we started to become popular.

[For non-techy types, we should add that Cocoa is a development framework for Macs and iOS.]

When did CocoaChina start to become a proper business?

At first we didn't have any business plan, just a forum. However, I met with Haozhi Chen [now CocoaChina's CEO].

He's a serial entrepreneur. He sold one company to CNET, then he was one of the founders of online store Joyo, which was sold to Amazon. His next company was automobile forum xcar, which was bought by CBS Internet, and then he became interested in investing in other companies, including Yeeyen [a UCG website where volunteer translators submitted their articles translated from non-Chinese language websites], where he became CEO. That's also when he invested in CocoaChina.

Also, when we started the company, I was the development head of mobile service company Sensky. I spun that team off to create the core of CocoaChina. That's not so strange in China. Sensky has a small stake in our business and friendship and trust are important.

Haozhi, why did you invest in CocoaChina?

Haozhi Chen (via translation from US colleague Lei): There wasn't a plan. I was just a fan of Apple and saw an opportunity to develop something.

Gary Liu: Developer relationships are central. There are a lot of developers who check the forum every day - it's a news hub. Also, we know a lot of people and have built up very good relationships through our conference - China iOS Mobile Development Conference. This is the third conference we've done. The first had 200 people, then 400 people, and this time it's 1,100 people.

In terms of other elements, we thought we could do something similar to Chillingo as an iOS publisher. However, when we were telling investors this, Chillingo sold to EA for what we considered a very low price [$17 million plus potential $12 million earnout].

After this, we looked at Tapjoy's model, because we have the developer user base and traffic is important. We considered developing a cross-promotion platform for all the large Chinese publisher, but our investors said, 'If you don't have any product, how can you say you can do this?'.

Actually, they still decided to invest in us, but it was a good question. So, we started with an idea from a friend and developed Fishing Joy and that's been quite successful, doing 10 million download in four months, half of which are in China and half of which are outside.

Since the launch, we've also done some tests and promoted a friend's game via Fishing Joy and our platform. The click-thru-rate was really good. We delivered around 25,000 click-thrus per day.

What other parts of the business do you have?

Haozhi Chen: Another aspect is licensing and/or localising international games. For example, the most lucrative game in China is the Chinese edition of World of Warcraft.

Other games that are popular include Pocket Gems and Smurfs' Village, but I think western iOS and Android developers are afraid of the Chinese market. In the internet world, companies like Google and Yahoo have failed, and there's also a perception for social games that there's a strong language and cultural barrier. 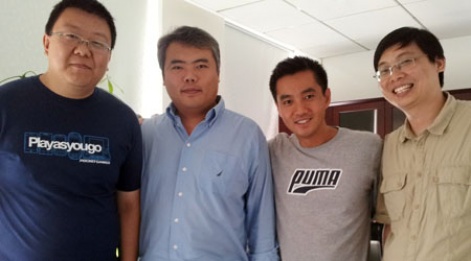 However, I don't think companies should worry about a game not being suitable for the Chinese market. They should focus on the many successful entertainment products such as games, movies and toys, not the problems of internet companies.

Lei Zhang [CocoaChina's man in San Francisco]: We see a big opportunity for mobile games in the Chinese market, based on the past successes of the games industry here, and the huge ramping up of the mobile/smartphone market. China is already the second largest download market after US, with revenues picking up very quickly.

Our team has a unique position; we understand the market and have a resourceful team and contacts, and so are ideally positioned to help western companies enter China. We're already in touch with a couple of major game developers. And we can also promote Chinese games into the international market. We want to be a bridge.

What are you plans for the community part of the business?

Gary Liu: We want to do something that's helpful for developers. We get good traffic to the website, and we also have a developer centre where you can see the ranking of apps and price changes in different stores - we're trying to make this into an Alexa for app stores. Plus, there's a company database, which is a wiki, and we're thinking about tools too.

Do you think there's any conflict of interest in being media company and a developer?

It's an interesting question because at the start we weren't a media company, just a forum where people could talk together. But in the three years since we launched the forum, there have been some major changes.

At first, people just talked about tech stuff - how to program etc. Then people stared talking about the App Store, and how to promote on it. Most of these people were individual developers or smaller teams, but now, bigger and bigger companies are becoming involved.

As Haozhi said in his keynote, we're going to invest 20 million Yuan (around $3 million) over the next six months in this.

Haozhi Chen: It's changing rapidly. Most iOS developers have been aiming at the western market in the past two to three years, but that's changing. We know the number one free iPad download in the Chinese App Store is getting the same number of downloads as in the US. We also know that WiStone is making $800,000 dollars a month, only from Chinese customers.

Gary Liu: We think there are roughly 30-40,000 developers in the ecosystem and that is growing. It's not a lot compared to php or Java developers, but it's really growing. Around 13 percent of developers are in Beijing, 6-7 percent are in Shanghai and the rest are spread - China is pretty big!

What are the biggest obstacles in the Chinese mobile games market?

The main barrier to getting people to buy applications is that not everyone has a credit card. I hope Apple will talk to the Chinese banks so that credit cards won't be the only option in future.

What do you think about the chances of other mobile systems in China?

Most of our members are currently still developing only for iOS, but we have an Android version of Fishing Joy that's been downloaded over a million times in a month.

We have some close relationships with Android channels and markets in China. It's more of a fragmented situation - you have to contact each one. We can do this and also have good relationships with manufacturers, so we can help get games onto phones.

The biggest issue with Android is addressing different payment methods. Also, with an open platform, there are potential security problems in terms of spyware and virus.

It's estimated there are 15 million tablets, of which there might be more than 4 million iPads. Android tablets also popular: there are some really cheap tablets in China.

I believe the bigger screen offers a better experience, and as the iPad and other tablets get thinner and smaller and have a better battery life, maybe some day we'll just use phones and/or tablets. The experience of games such as Real Racing is really great on the tablet.

What's your prediction for the future of CocoaMobile and the Chinese mobile games market?

We really want to help Chinese developers release successful games overseas, and help overseas games to do well in China too. We can be a bridge.

As for the mobile market in China, it's currently still very small, but we think it can grow into a huge market, because everyone needs to use a mobile, and needs to be entertained, relax and have fun. I believe it will be bigger than PC market. It must be - you can have two phones and a iPad!

Thanks to Gary, Haozhi, Lei, Walter and all the staff of CocaoChina for their time and for being such good hosts.

You can see what CocoaChina gets up to via its website (Chinese language-only].