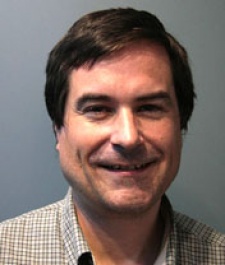 February 20th, 2012 - 10:01am
By Caleb Bridge
Highly regarded on its WiiWare debut, Frontier Development's LostWinds blew onto the Apple App Store before Christmas.

Well reviewed, it wasn't a total success, however, as the UK studio's CEO David Braben explains.

No matter how much focus testing you do, the mobile market contains a much wider variety of players compared to consoles - something that came to light over the game's possible control systems.

Pocket Gamer: Can you explain the inspiration behind LostWinds?

David Braben: The idea started when we were thinking about how to make best use of the controls for the then yet-to-be-released Nintendo Wii.

Steven Burgess, one of our designers, was watching the way the wind blew the branches of trees around, and this started a train of thought that ended up - after contributions via Frontier's Game of the Week forum that brainstorms ideas - with the final concept of two characters being controlled by the player; a wind spirit (Enril) working in partnership with a young boy (Toku).

Sometime later we were contacted by Nintendo about its forthcoming WiiWare service, and felt LostWinds was a perfect fit, so we went for it.

Why did you decide to bring LostWinds to iOS?

We had previously dipped our toe into the mobile space with games for Pocket PC and Java feature phones years ago, and it was clear - even then - that the promise of the mobile market was well on its way to being fulfilled.

We now view iOS as a major gaming platform, and the commercial opportunity is undeniable when you look a the numbers involved. 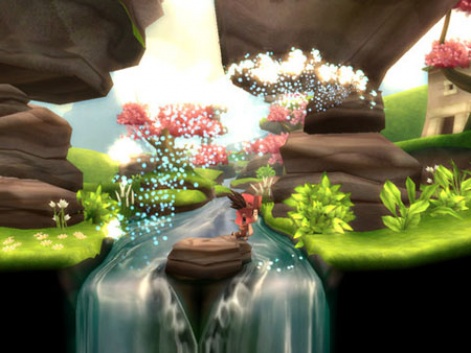 It's great having direct access to customers via digital distribution, and a yearly product release cycle offering ever more powerful multi-core CPU and multi-core GPU hardware.

And the iOS device architectures fit perfectly with Frontier's COBRA game development technology because it already sports a multi processor-friendly architecture to wring the last drop of performance out of even high-end games consoles.

So we started porting our tools across in early 2011.

As part of that process, we chose a game to produce that was a) fully in our creative and commercial control, b) had a control mechanic that was suitable for touchscreen implementation and c) the right performance band for iOS devices so we would be able to show off the production values we can bring to the App Store.

It was a valuable trial for us, as it gave us better insight into the market which we will need as we plan to do more in this field in the future.

How long was the iOS version in development?

After we ported COBRA in early in 2011, we paused to finish into Kinect Disneyland Adventures, Kinectimals: Now With Bears and the Kinectimals mobile game, which were released later in 2011.

As that work eased, we were able to get back to LostWinds to release the game just before Christmas.

Were there any graphical limitations with the iOS version?

We've had extensive experience of the PC market and are not phased by a 'compatibility lab' test, so getting the game to work across a small range of different hardware was not a significant problem.

The game is a Universal App and we have a system where we simply auto-configure what the game tries to do based on the hardware it detects. 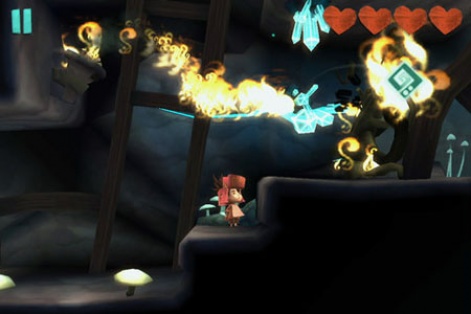 It's been interesting to learn about and optimise around the different strengths of each iOS platform.

Fill-rate can be a challenge compared to consoles, so depending on the platform we have had to tune the use of alpha transparency and full screen effects, and tweak polygons here and there, but in most cases we have achieved a similar artistic effect rather than having to cut it.

How did you come up with the control system?

LostWinds is strongly centered around controlling both Toku and Enril, which was accomplished with the Nunchuck and Wii Remote respectively on the Wii.

For the directional control of Toku on iOS, a D-pad was the obvious first thing to do, and indeed when we first showed the game publicly, it was the D-Pad control that was shown. The early reactions to this were negative though, which reinforced our desire to innovate.

When we got back to the project, we ran two directional control systems in parallel - the D-Pad and a tap-to-move system - which we felt was innovative and helped with the ergonomics of playing with a touchscreen on a table or on your lap, where a D-pad can be more awkward.

Of course, being adherents to the discipline of focus testing, we tried them both out and found that tap-to-move was generally preferred.

Still, we had planned to release with the D-Pad as an option. Partly through not wanting to appear indecisive and partly due to time pressures not allowing us to fully develop both control schemes to final level, we ended up launching with just tap-to-move.

However, after launch, it became apparent that the game's broad audience is made up of many different types of player, and we really should have catered for all.

Were there any other differences you had to deal with respect to the touchscreen?

On the use of Enril's powers, with the Wii Remote we had a very short slow-down of the game world after the player had gusted Toku, an object or an enemy into the air in order to buy a little more time for the next action. The Wii remote is relatively imprecise.

For iOS, we debated long and hard, and tested, and decided to remove this slow down, as sliding your finger over the touchscreen had an immediacy and, for many, a greater precision than Wii.

What is your process of getting player feedback?

In development, we have a lot of experience of focus testing - it always feels like it's too early to test, but if you don't bite the bullet, it's way more painful to react to the feedback.

After release, of course, we offer an e-mail support service via our website, and we are active on Facebook, Twitter and our own forum community, and we made sure we joined various outside online forum communities. We also engage with people individually to get to the bottom of their issues.

Apple's infrastructure really helped, as we were able to easily hold a closed beta trial with a set of people who had experienced frustrations and prove out our proposed solutions - which were to re-implement a variable slow-mo Gust Time delay and offer the option of a D-Pad for those who wanted it. 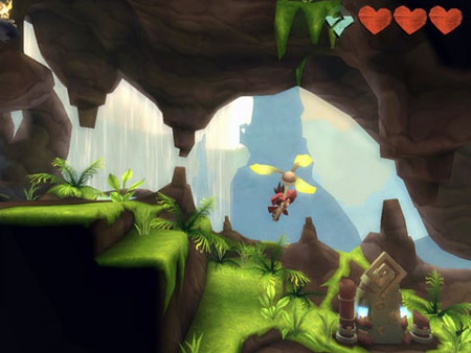 We had some very insightful contributions from our beta testers so a very heartfelt thank you goes out to them for the time they generously gave us.

Aside from the controls, what else was different about the iOS version?

It's been re-built using a later version of our COBRA technology, but the same game logic was implemented and the same art assets used as a starting point, so there are the same levels, puzzles and story in each version, but there are also new features.

There wasn't much that we felt we needed to change in the fundamentals of the game; we knew the gameplay was sound, so our focus was on the control system, balancing and the basic engineering and optimisation needed to make the game happen.

We also added Facebook and Twitter integration and the 'snapshot' feature where you can superimpose game characters on your own photos for comic (or artistic) effect.

Did you get any feedback from the WiiWare game that improved the iOS version?

Probably the biggest one was that in the first WiiWare game, people got lost.

In the sequel, LostWinds: Winter of the Melodias on WiiWare, we implemented a map, which gave enough of a hint to keep people moving, so we implemented a similar map in LostWinds on iOS. There were one or two potential level design frustrations that were changed, too.

Do you think the iOS version stood out more because of its console origins?

The main thing is the awareness that comes with it having a pedigree. It's known to be a good and interesting game, which has made people willing to listen. People who remember it from WiiWare have been evangelising, which has really helped.

I wouldn't say we have done anything particularly special, though, just very standard product marketing. I think quality and the word-of-mouth it generates will tell.

What future support do you plan on providing for LostWinds iOS?

We are currently looking into iCloud save games support, and it doesn't take a rocket scientist to work out that Apple will be releasing more capable hardware at some point this year, so we'd like to be quick out of the gate with support for that, too.

Do you have any plans to bring new, original games to iOS?

Definitely. LostWinds is just our first step. We will release games that are designed from-the-ground-up to take full advantage of the opportunities that iOS offers.

Thanks to David for his time.