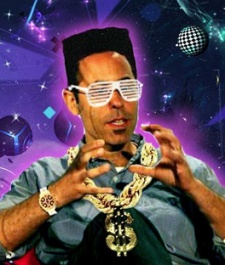 March 15th, 2012 - 10:28pm
By Jon Jordan, Contributing Editor
The success of OMGPOP's Draw Something is a great example that the virality of the mobile gaming business is alive and well.

But while it's tempting to label the game an overnight success story, as if often the case, the company itself has experienced many half successes and plain failures in order to get to this point.

We caught up with its very excited CEO Dan Porter to dig into the company's past to find out how it shaped its success; currently measured in terms of the game's 25 million downloads, 10 million daily active users and 1 billion daily ad impressions.

Pocket Gamer: So another 'overnight success' in the social mobile gaming space. Talk us through your pre-success times?

Dan Porter: We made a lot of games before Draw Something - on mobile, web and Facebook. Each time we believed maybe this was the game. And each time as the game unspooled, it either had a slight flaw or was fun but not fun enough.

It took a lot of faith to keep noodling away on games and applying what we learned, but we always felt there was something at the core of the real social that we were trying to capture.

In Draw Something, it all came together. It was an overnight - five year - success.

One service you previously launched was a teen dating service. What did you learn from that?

That dating sites are a terrible business and being in the business of policing people's profile pictures is not scalable!

You've taken a bunch of VC money over the years, so how has that changed the company ethos?

For one it has given us the runway to get this far. And it has allowed us to make the games we want instead of contracting to make other people's games.

You try to position a company that this isn't a just hits business, that you have a formula and operational leverage. But at the end of the day, it kind of is.

It's high risk high reward. One of our investors, Spark Capital, participated in every round we ever did. Having a fund believe in you all the way through is so valuable as an entrepreneur.

As you've gone from Flash to Facebook to mobile games, how has your focus changed in terms of how you try to engage with your audience?

The two things that we were looking for as a business were, could we engage players by making something really fun for them?And could we monetise it, i.e. make a living from it?

The web was a good place to engage players but a tough place to monetise. Then Facebook came along and as we were looking at synchronous, real-time gaming, was a better platform than the open web but not perfect for us.

When we made our first mobile game (Puppy World) we were astounded at the monetisation rate. In other words, we made things people were happy to buy in the game, and the payment friction was so low.

When we made Draw Something, it was the perfect marriage - you could play almost real-time with your friends because you have your phone with you anywhere, and if you want to spend to enhance the game, it's super easy.

I am a 45-year old father of two. Before OMGPOP I never worked in the game industry. And while I like games, I wouldn't call myself a hard core gamer.

I designed the majority of the game based on ideas I had. I doubt I could ever get a job as a game designer anywhere and I would most certainly be terrible at it.

But maybe there was something about the fact that I am an outsider, someone with more experience in community, the internet and such, than a pure hard core game designer, that lead to a fresh and slightly out of the box design of the game. No leaderboards, no persistent leveling, cooperative... I wonder if someone who was a 'real' game designer could have ever made this game.

I think I am incredibly lucky and that fortune smiled on me and the team, but I also think there is something outside of the box about the game because I honestly couldn't design my way out of a ditch, and that makes this game special.

My favourite games growing up were Life, Monopoly, baseball and tackle football (American) in the street. Those were my influences.

What was the design and development process of Draw Something?

It was highly, highly iterative. We took the legacy game we had, moved it mobile and then played it obsessively to make sure it was right for the device.

When did you think you had a hit on your hands?

After the first day we had 30,000 downloads. I remember thinking, '30 more days of this and maybe we will hit 1 million'.

It seemed just epic. Then we broke 100,000 and it seemed possible that we could get to a million. But we had trouble breaking the App Store top 25. We were stuck at 26, which was depressing.

We made some performance enhancements to the game over a week or so, and then it really started to explode. My wife started texting me, 'You're at 22! You're at 16! You're at 8!' Then we knew we had something special.

What was the marketing plan for Draw Something and did you spend much in terms of user acquisition etc?

We spent a little money the first weekend to climb to number 6. We never spent a penny afterwards. At GDC, every one asked us 'You must be spending so much money to be #1'. They couldn't believe we weren't spending a penny.

It was then that it struck me in some ways how cynical the industry is - bots, huge marketing budgets etc. We really were an anomaly - like Temple Run or Angry Birds or Words With Friends. It wasn't marketing. People just loved the game and told other people about it.

How hard was it to develop and launch simultaneously on iOS and Android, and how much do you think going cross platform helped the game's success?

As the game took off, two of our Android developers came to me and said, 'We want to make it nice on Android'. They did in about two weeks and the game blew up on Android afterwards. It needed the love.

It's been super important to our success because players can play with their friends across devices. That is powerful. For a single player game, maybe it wouldn't be so important.

What's surprised you in terms of how players are interacting?

It surprises me how many people play the game live and out loud. I've seen whole parties of people sitting around and playing. It's like they are simultaneously online and offline in a cool kind of way.

Also, the pride people have in their streaks, which was a wacky idea I threw into the game. I was in the Apple store and an employee saw OMGPOP on my credit card. He started ranking all his friendships for me by how long their streak was. It was awesome.

What's your plan in terms of supporting the game and building on the franchise?

It's a big strategic decision about supporting the one title or rolling out other parts of the franchise. The 100 percent honest answer is we don't know the right answer yet. I'll let you know when I do.

Thanks to Dan for his time