All about making great games 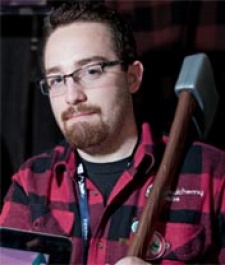 May 16th, 2012 - 07:17am
By Dennis Scimeca
Owlchemy Labs is the studio responsible for Smuggle Truck, a satire of American legal immigration policies which landed in a George Lopez comedy spot - and in expressions of outrage from immigration special interest groups.

Rejected by Apple when submitted to the App Store, a replacement of sprites and some other changes resulted in Snuggle Truck, which was accepted and became a success.

At GDC 2012's Indie/Press mixer, PocketGamer.biz had a brief encounter with Owlchemy Labs co-founder Alex Schwartz, but missed him at PAX East where the studio's new title, Jack Lumber, was being shown to attendees.

So we stopped by the Massachusetts Institute of Technology's GAMBIT Game Lab to meet with Schwartz and finally get a proper catching-up.

Pocket Gamer: Your first professional experience in game development was with Seven45 Studios, where you were a technical artist. What lessons did you learn?

Alex Schwartz: I was really lucky to get into a position directly out of school as a tech artist, because a tech artist is not a normal, "Get your tasks, do them in order, get your shit done" type of position. It was kind of a company-wide problem-solver position ... Basically my job description was to keep everything going, and I was a fire hose for problems.

So I think that definitely played a direct role in what I do at Owlchemy. I call myself the CEO and Janitor of Owlchemy Labs.

You wear your marketing hat, you wear your development hat, which thankfully I've been doing less and less of. Devon, our programmer, is amazing and so I don't have to split the code 50/50. But there are so many things outside of our code and design that need to get done, so I do everything else.

I think being able to manage 70 screaming people with questions definitely helped [with] running a business.

Most of your press has been garnered around mobile development, but Owlchemy identifies itself as a developer of games for downloadable platforms. Do you have any concerns about being identified so strongly with mobile?

There's a trend: Everyone and their mother is forming mobile studios. If you look at the news you see, you know, three, four triple-A veterans from wherever ... now forming its own small, indie, mobile studio, right?

We didn't intend for the products of our labour to be necessarily mobile [games], but some of the best platforms to release and make money on and get a good audience are mobile right now.

We knew we just wanted to get on platforms that didn't require publishers, and that's where we are.

So would you call yourselves a mobile developer in actuality if not in name?

Well, we have our Steam/PC/Mac version [of Smuggle Truck], we also were in the Humble Bundle with a Linux version, and then we have AaaaaAAaaaAAAaaAAAAaAAAAA!!! for the Awesome, which was developed with Dejobaan Games - that was also PC and Mac.

So we have four platforms that are non-mobile. I guess that doesn't make us a mobile developer, but we are known for our talents in mobile, and knowing what players want us building for that platform.

Do you think you might focus on mobile platforms going forward?

Jack Lumber specifically is a heavily touch-driven game, and so it's hard to abstract that touchscreen to something else.

We're working on a Steam version. We're looking at whether [we can] make the game fun with a mouse. We think we can, with some various changes to gameplay and controls and input and smoothing and all that kind of fun stuff, but we're focusing our primary platforms as mobile.

When our next title comes out, it's the gameplay that drives the platform. If we come up with an amazing idea that will work with Kinect, then we'll be going there. I think you should come up with the game and then figure out where it comes out, or where it should be released.

You're a fan of using licensed engines, notably Unity. Why?

I had bought into the Unity kool aid really, really, early back in 2007, when Unity was a Mac-only platform. It wasn't building for iOS, the iOS App Store did not exist at the time. [Unity] was a relatively unknown engine.

Yilmaz and I, we said, "Okay, let's try this out, let's start doing some student projects in it," so we got better and better at it, and one of the things I wanted to do was go all in with that one engine. We felt that it would be kind of the future.

It turns out that was a good guess. Unity is one of the biggest engines out there now, but we had already known what we were going to build everything in from the start. We were going to stay a Unity shop, and every project we've done so far has been in Unity.

It's been a great business partner for us too. It's promoting our games on its site, and it has its porting platform [Union], which is bringing Snuggle Truck to platform such as Roku and LG TVs.

And it's expressed it really loves our games. When we go out to the Unity conference, we get bear hugs from the CEO. It's a great community to be part of.

Game jams and crowdsourced QA are part of how Owlchemy does business. Is that a viable long-term plan for the company?

That's an interesting question, and something that we definitely struggle with as an indie. A lot of companies, they start and their main goal is to grow. Our main goal is to make great games. If that means that we'll stay under 10 people for the next five years, then so be it.

If we did any move to change our core philosophy ... one of the things you mentioned like crowdsourced QA. Bringing our game on an iPad to a Starbucks, and just talking with regular people and introducing yourself and saying "Hey, would you like to try this out?" I think is a great, it's a great thing.

If we did something that would make it disallowed, it would probably be a bad choice for our company, or it would turn it into just a different company, so, yeah, I don't see that changing any time in the future.

How did you land Bill Tiller? He's an established vet who went to work for a start-up of fresh faces. There's got to be a story there.

Bill was my boss's boss at Seven45. I was tech artist, there was a lead artist and he was the art director. They brought him in because he had 25 years' art direction experience - Curse of Monkey Island, he was basically the background artist and the creative guy behind that style.

We both ended up leaving the company around the same time, and he heard about our game. These guys were making a game that was a satire on legal immigration, and basically he called us up and he said "I want to do the art for this game. And I don't care if you pay me, or don't pay me, I'm doing it."

And then he basically like pitched himself, he's like "I've been doing this for 25 years. I was an art director on this and that." [Laughs] "You are going to let me do the art."

How could you turn something like that down? The only concern was, is he going to have enough time to be able to finish the art?

He shipped off a couple assets to us in the beginning, and they were just spectacular. The art style is amazing. He does great work. And so we were sold, and he's been working on all of our projects ever since.

How did it feel to have Bill Tiller pitching you?

[Laughs] He had such strong opinions that he wanted to build a game about this immigration satire that he was pitching hard. It was an interesting experience. It felt great, I mean, we definitely wouldn't be in any kind of spotlight without like really great art.

Because on iOS you can make a great game, and if it doesn't ... people just, they skip all the text [in the App Store], they look at the first or second screenshot, and they say "Is this valuable to me?" And having his art there seals the deal for our games.

We haven't announced our monetisation model, whether it's paid or free to play.

Do you worry people might look at Jack Lumber and dismiss it as a Fruit Ninja clone?

I think that's kind of the core of what we've been thinking and talking about for a while with the game. I would say the game is much closer to games in the line-drawing genre than Fruit Ninja, but the fact that something basically moves vertically up the screen and then falls off the screen, instantly that parabolic trajectory of things going up and moving down, people say "Oh, Fruit Ninja."

We know that we're speaking to a crowd that probably has played Fruit Ninja, and so we need to challenge some of those assumptions ... It's step one: You stop time. At that point you're closer to Max Payne or other time-stopping games.

Step two is you're drawing a calculated path. Wording such as "down the grain" really clicks with people.

Thankfully at PAX, we had over a thousand people just playing and playing. That condensed QA period really helped us. We could A/B test the next person and say "Hold your finger on the screen, and then draw a smooth path down the end of the logs," or "From end to end" or "Down the grain," and that wording really clicks with people. We'll see maybe a 99 percent success rate when you tell them that first off.

If we can get someone to play the game they'll definitely understand. I think we've done a good job of separating ourselves in theme, in humour and things like that.

We just need to make sure that screenshots are poised in a way that they show that dotted line for example, so that you understand that there's something [else] going on.

So instead of bullet time, Lumber Jack time?

[Laughs] I think no one will bat an eye. That's my guess. That's kind of like how South Park makes fun of everyone equally?

We should establish ourselves that we are just building silly games, and we're not going after any certain groups.

Thanks to Alex for his time

You can keep track of what the company get up to next via the Owlchemy website.


Dennis Scimeca is a freelance writer from Boston, who publishes widely on the subject of video games. You can follow him @DennisScimeca