Our GPU business is growing faster than the market, says ARM as it announce 3 new Mali chips 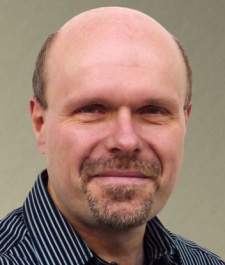 Nvidia is bringing its marketing muscle from the desktop world to highlight its Tegra brand.

Previously staid engineering outfits such as Qualcomm are getting involved in consumer marketing in terms of positioning for its Snapdragon chips, while Intel continues the yearly cycle of trying to convince OEMs it can squeeze the desktop experience into phones.

UK chip design outfit ARM is happy to focus on its core business, however; coming up with the highest performance low power chips used in 95 percent of mobile devices (at least in terms of CPUs).

In this sense, its growing GPU business - the Mali range - is positioned as a no-brainer decision for vendors.

'If you're using an ARM-based CPU, why not use a GPU from the same company?' goes the argument.

"Everything we do at ARM is based on reducing the power per processed pixel," explains Steve Steele, head of product management for ARM's media processing division.

"With ARM, you get components that you know will work efficiently as a complete system.

"Desktop graphics is fairly easy. You plug into a power source, you can use water cooling and you have dedicated buses for moving data around. On mobile, it's totally different. The CPU and GPU are sharing resources and you have to limit heat and remove it efficiently or people will complain their phone are too hot."

In this way, he argues, getting your CPU and GPU from the same company provides clear benefits. Techniques such as cache coherency, which means that the GPU and CPU can access each others' cache memory, are crucial in reducing power.

And these are reasons Steele says ARM is doing so well in the GPU business.

"We're growing quicker than the market is growing," he states, pointing to high profile product wins such as Samsung's Galaxy S II and III.

But it's a fast-moving sector, and that's why ARM has announced three new Mali designs.

In keeping with its engineering focus, it labels them with letters and numbers, rather than sexy names. 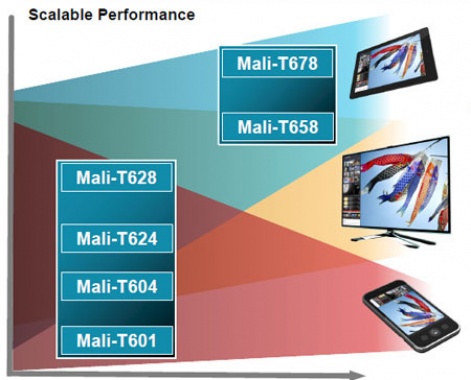 All using the second generation of its Mali-T600 architecture, the highest performance chip of the three is the Mali-T678.

This offers four times the performance of the baseline T624 chip, as the number of available cores and their arithmetic (or shader) performance have been doubled.

This boost to the compute capacity of the Mali architecture comes as OEMs are increasingly looking to improve their devices' performance when it comes to features such as post-processing of photos and videos.

ARM also hopes to sell such parts into the emerging smart TV market, where image quality is the key feature.

The other two products announced are the T624 and T628.

As with all ARM chips, final number in their description highlights how many cores the design can use. Hence, the T624 can manufactured up to four cores, while the T628 offers twice the performance with a maximum eight core configuration.

Steele describes them as more balanced chips in terms of their compute and graphical performance, compared to the compute-heavy T678. Hence these two are more likely to be found in mass market smartphones and tablets.

Filling out the wider ecosystem for Mali, ARM has announced that the chips fully support the OpenCL standard (including the desktop flavour) and the RenderScript compute standard used in Android OS.

ARM's new ASTC texture compression technology (Adaptive Scalable Texture Compression) has also been adopted by the Khronos Group and made available as an extension to OpenGL.

"It's not just another texture compression standard for developers to support," Steele argues.

"We expect it to be widely used. It's not just ARM banging a drum."