August 29th, 2012 - 05:50pm
By Keith Andrew
One hit wonders are often incredibly profitable, but it arguably says more about a studio if its able to spread its downloads across a multitude of titles rather than just one.

In a relatively short space of time, indie outfit Neon Play has managed to make a name for itself serving up a series of successes  games that offer accessible play perfect for a quick-fix.

Little surprise, then, that the firm has just passed 40 million downloads across iOS and Android, with Paper Glider, Traffic Panic and Flick Football the standout franchises.

We caught up with CEO Oli Christie to find out what lies behind such success, and where the studio sees itself going next in this ever-changing market.

Pocket Gamer: What do you think it is about franchises such as Paper Glider or Traffic Panic that appeals to consumers?

Oli Christie: I think with the Paper Glider franchise, it is the wonderful simplicity of the games themselves.

They had mass market appeal; the art style was really eye-catching and clean; and the gameplay was intuitive, easy to pick up and play and the Paper Glider games were perfect for those five minute gaps in the day.

The Paper Glider series of games has had over 13.5 million downloads.

The Traffic Panic series, of which there are three games, has also benefited for the easiest one-tap gameplay.

As the series has developed from the very basic visual style of Traffic Panic to the stunning 3D models of London and its famous landmarks, players are just loving the huge explosions and damage they can cause.

With the new addition of 'tap bombs', players can also now control what they explode and in which direction. The game series now has 8.5 million downloads.

What kind of split in downloads are you seeing across iOS and Android?
Traffic Panic London has launched on both iOS and Google Play with 4 million downloads.

In both charts, the game has gone top 10, with the game currently number 4 in Google Play - with some excellent editorial coverage.

60 percent of our Traffic Panic London downloads are on iOS, and 40 percent Android  or, rather, Google Play. The game has also launched on the Amazon Appstore in the the USA and has gone top 5, but the numbers are smaller in comparison.

What kind of conversion rate are you seeing when it comes to in-app purchases?

I'm afraid we are keeping these confidential at the moment.

Out of interest, what do you make of 22 Cans? Molyneux thinks we need to evaluate in-app purchase behaviour, seeing those who pay for them as investors rather than customers.

I think what he's doing is very interesting, although it feels that learning seems more a driver than making money, which is a nice position to be in. For most studios, they don't have this luxury.

All studios are hopefully evaluating user behaviour and seeing how fast the market changes, it will be intriguing to see what 22 Cans learn in one game might still be relevant 12 months later.

I like the philosophy of paying customers being treated like investors - whether players will care about that with so many other apps available will be fascinating. But if 22 Cans is prepared to publish its learnings, we'll all be listening...

Where next for Neon Play? More of the same, or will you look to target additional markets or consumers?

We've got a few very diverse games in the pipeline.

One is called Jewel Jumper and it's a multi-level game using the accelerometer where you control a dino-monster called Spike on a challenging journey while being chased by a huge Big Daddy monster.

It's looking awesome and will be launching in September. 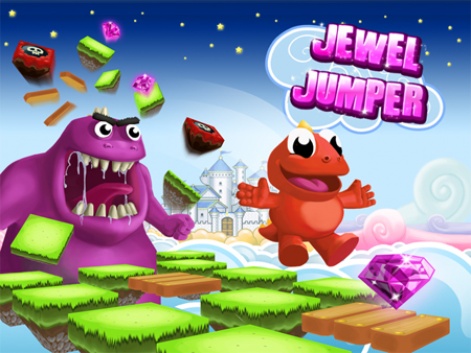 We also have a drawing game coming soon after which will take a totally new spin on the drawing game genre and make it more fun, more social, more viral and a lot more funny. It's very cool.
Thanks to Oli for his time.