'We've got it right this time' 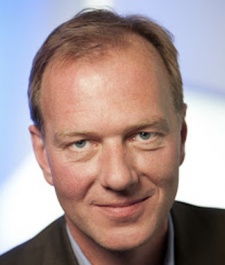 November 8th, 2012 - 12:53pm
By Kristan Reed
It's hardly controversial to suggest that BlackBerry has a battle on its hands to maintain a foothold in the hyper-competitive handset market.

Industry watchers see 2013 as very much RIM's make-or-break year, and much rests on the response to the company's upcoming platform, BlackBerry 10.

In advance of its launch in Q1 2013, we sat down this week with Volker Hirsch, RIM's director of business development of the gaming division to discuss the launch, and find out what's in it for mobile game developers.

Pocket Gamer: Firstly, tell us about the BlackBerry 10 platform.

Volker Hirsch: What we're doing here is not only deploying new handsets, but a completely new, re-engineered platform, which is no mean feat.

We've got to get it right - that is the core message.

Has BB10's launch date been nailed down as yet?

What marks out BB10 as a platform, and why should mobile developers be interested?

Well, it's incredibly powerful, and that's where it all starts.

There are a couple of specifics that only we can do, and I think that we will be doing better than others. But the starting point is that it's a platform so powerful that it allows games to shine properly.

The gaming experience on BlackBerry 10 is a completely different one than it would have been on the old ones.

When I joined BlackBerry as part of the Scoreloop acquisition, there was limited mindshare in the developer field for the platform, but I think that has changed very quickly. There are a couple of reasons for that.

One is that it's very easy to address - Galaxy On Fire 2 HD, for example, was ported by one engineer in one day.

That's not going to hurt...

So, it's easy, and it's important that we make sure that we provide the right tools that developers are used to.

The fact that the operating system is C++ based is an advantage, because probably the majority of games are being written in that language anyway. It's also a powerful platform for high-end gaming.

That was the first bit of homework that we needed to do - if you introduce a new platform and make it really awkward for people to support it, then, you know, you struggle.

But this is one of the reasons why PlayBook is relatively strong on gaming right now. Most of the big players are there, and most of the must-have titles are there, and this is before we've even started to properly deploy the new BlackBerry 10 platform.

What about monetisation? How will the platform monetise compared to your competitors?

BlackBerry has traditionally been better at monetising than most other platforms, and we're going to get even better at it.

There are many analyst reports out there - and not ones we've commissioned - that suggest that BlackBerry App World today is already more profitable than Google's platform.

The revenue share split is identical, premium price points seem to be holding up better, and we think we're doing better with fulfilment.

We have carrier billing on 60-plus platforms, on a normal 70-30 split, and without you having to integrate the special carrier requirements.

Carriers, as loved or as hated as they might be... users trust [them]. And in many markets that we often forget, people simply do not have credit cards, but they do have a phone subscription, so that's a huge chunk of the market.

For developers on competing platforms, they increasingly struggle to make money. That's a huge constraint for them, so I think we have a compelling story to tell, and early research backs that we can make money.

This is one reason that this ten thousand dollar programme really was a no-brainer, because we're actually fairly confident that people will make that money easily.

I'm not so sure others could claim that.

What are you doing to solve the issue of discoverability?

The other big pain point from a developer perspective is discoverability, and this is where my experience with Scoreloop comes into play.

Part of the home screen will be the Games App, which is powered by Scoreloop, basically, and that creates an instant community. It connects users straight into their friends, and does all the things that Scoreloop was doing, with leaderboards, and peer-to-peer challenges, and that sort of stuff.

We also have an API that can be integrated straight into your game, which allows you to do everything from chat, to gifting, or recommending, or sending the download link.

On any other platform you would have to go out, go in somewhere else, then send a message, then they would have to remember the title, then go to an App Store - it's a very disruptive flow. 'Flow' is a central point of BlackBerry 10.

You've been very bullish about your UI...

I think the approach we have [to UI] is the most innovative since the other fruit guys launched their first iPhone!

The key thing around the BB10 UI is the flow - the flow of the screen to bring [elements] together. The flow across from active panes, to traditional app grids.

You can have [several] active panes all running at the same time, and this true multitasking is another huge upside to the operating system.

Everything you see - all of is live. You pop in, and it's there. It doesn't fake live.

It's a very simple UI, very much based on flowing from one thing to another, rather than diving down and coming back to the surface, and then going down into a different pool.

Or you can use what we call a 'peek' gesture, where you can have a quick look at something like you do in normal life, or set up as many notifiers as you want, for Facebook and Twitter and whatnot.

It's intuitive. I think everyone got used to the old type of UI, and then you realised, oh hang on a minute, in real life I actually function differently.

Are you allowing companies to also run their own bespoke stores?

You can have a carrier channel, so they can put some of their own specific content on there. It's one of the strengths that we've always had, because carriers are still an important part of the ecosysytem.

On the gaming side specifically, there are two entry points. One is App World, but if you want the tighter, more socially customised experience, you go into the Games App.

In a fulfilment sense it goes through App World, but in terms of finding what you're interested in, checking out what your friends are doing, that's an insulated, so to speak, experience.

In terms of pricing for games, you mentioned PlayBook game prices have held up.

That's based on PlayBook [game] sales for £9.99, where we've seen quite a few downloads.

So what pricing do you expect will be typical?

It's hard to say. It's down to the developers and publishers. They can do premium, freemium, in-app purchases, whatever they want to do. Our systems will support that.

When you look at Angry Birds Space, it sells for quite a bit more on the PlayBook today than it does on other platforms. When you look at overall stats, BlackBerry has always held up better in terms of pricing than our rivals.

Is that because you have a different type of customer perhaps?

There isn't a typical 'BlackBerry customer', right? It's not only enterprise, and it's not only kids. And sometimes it differs very much from region to region.

I wish I had an easy answer. It might have to do with the overall perception for quality, and for being a premium product, and that seems to translate better in our case than it does for others.

I think if developers could turn back the time of the 69p battle, they probably would. As a platform holder, we want to provide the tools developers need for this, we don't want to tie them in at all.

The stats we have, when you look at historical data, we try to extrapolate this forward, it's anyone's guess if this will break in at some stage. I don't actually see it, because my hunch would be that it would have done so already.

In terms of the hardware spec, how would you see the upcoming handsets sitting against their rivals?

It's one of those things that's veiled in secrecy right now, but it's shit hot! [Laughs]

Have you locked-down the specs?

We have, but it's more around the user experience.

The hardware is sort of good design, solid, competitive spec, we really want to focus on the difference of the experience and not get into a spec race, because we think the market has moved away from that.

Have you decided on the range yet?

We'll launch [BB10] with the full touch device, and that will be followed shortly afterwards by a full QWERTY keyboard, and then devices that will address each of the price points, at high end, mid-tier and entry level point as well.

At the moment, though, we're just focusing on the launch of the platform, we're not really commenting specifically about our product roadmap in advance.
Thanks to Volker for his time.