And he has the tools for the job 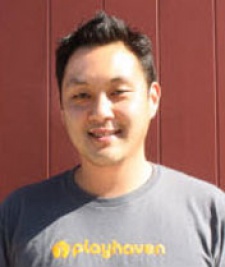 Partly that's been boosted by its decision in March to make its tools free.

"We've been working with large media companies such as Turner, Nickleodeon, Fox Mobile and big game publishers like EA, Sega, and Namco for a while," says CEO Andy Yang.

"We wanted to encourage wider adoption, especially among smaller studios. It's time to educate the indies."

Yang's argument is PlayHaven is one of the few tools that covers the business cycle of mobile games end-to-end.

"We've seen a lot of focus in the industry on user acquisition, but I don't think that comes first," Yang ponders.

"Retention and monetisation are key. You have to get those aspects of your business working first. Then you have the money to spend on user acquisition."

His wider point is that during 2012, tens of millions of dollars (often VC money) were spend funneling users into games in which developers didn't have the analytics or the retailing smarts to ensure a decent return on that investment.

Of course, this plays into PlayHaven's sales pitch.

"These give developers the ability to highly target users so they can turn engaged non-payers into payers, while ensuring those players who have paid don't see adverts and have access to good deals.

"It's just like walking into a Walmart and hearing 'Go to aisle six now for the sale offers'."

Demonstrating what using its tools can do, PlayHaven highlighted their impact on Mobile Deluxe's Big Win Slots game.

It's increased weekly revenue 23 percent, while growth in the sale of discounted items has risen over 175 percent. 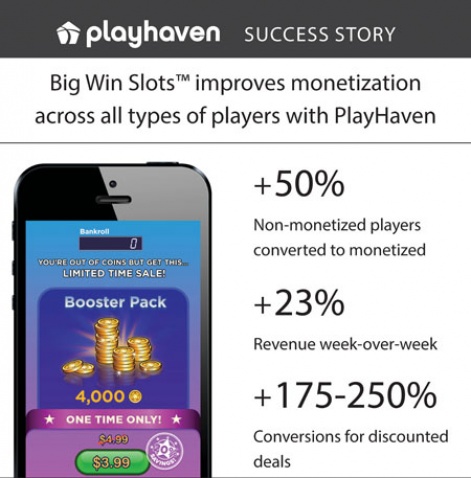 Of course, this is for a casino-style title that has strong monetisation inherent within its slots gameplay.

"PlayHaven won't help you monetise a bad game," Yang agrees. "But it will help many developers make more money."