Getting in the game: Jagex reveals why now's the time for a major move on mobile 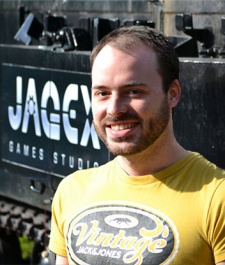 Being a big name in online gaming industry doesn't necessarily translate to a quick and easy transition into the world of mobile.

Just ask those at Zynga to talk the challenges of shifting successful IP on Facebook to the App Store, and you'll likely be treated to a taster of the challenges that await, even for the big boys.

Such hurdles haven't deterred the makers of RuneScape from releasing their first mobile title based on a web game. Cambridge-based Jagex recently launched Carnage Racing - a chaotic 3D racer that originally started life on Facebook on iOS.

But what problems did the studio face porting the game, and how different is the mobile scene to the spheres the firm previously operated in?

We spoke to Robert Kinder, marketing director at Jagex, about the company's mobile strategy, and why Carnage Racing is the firm's first stand on smartphones.

Pocket Gamer: What was the inspiration for Carnage Racing?

Robert Kinder: I think there are a lot of influences in Carnage Racing - some obvious, some not so much - but for me the biggest have to be the games that are immensely fun, immediately accessible and have that 'just one more go' vibe.

Titles like Mario Kart, Burnout and Carmageddon spring to mind.

That's not to say that the influences were solely from racing games. Whenever you have mechanics that involve weaponry or item-based actions, you have to consider how those mechanics function independently of the rest of the core experience.

For that you need to look at games with excellent gunplay, strong user interface and effective visual feedback. Suffice to say, we did our research.

Tell us the story behind the development of the game.

The development team are predominantly ex-Rockstar developers, all of whom worked on the Midnight Club franchise, so their heritage and expertise is in racing games. This made Carnage Racing a natural fit for the team.

Interestingly, the game was actually their idea  born out of a love for racing, but made to fill a gap we felt had widened since more arcade-orientated racing games had fallen from popularity in favour of realism and licensed vehicles.

Once they showed us the original prototype we knew it was a project worth pursuing. Our first beta release was actually on Facebook at the end of 2012, and we are proud to have been one of the first fully 3D games on that platform.

After developing a very loyal following, we felt it made perfect sense to broaden our audience and bring that same core experience to mobile.

Why have Jagex decided to make its first real move into mobile now?

I wouldn't say that this is our first real move into mobile, but it's certainly our biggest.

We've had previous successes with Bouncedown and Undercroft, among others, but this is the first high-end, console-like experience we've developed for mobile, and we're very proud of the result.

We could have entered the mobile market sooner than we did, but I think it was important that we waited until we had the right idea  something we could all collectively get behind.

We have always been advocates of online, multiplayer experiences, so while Carnage Racing on mobile might seem something of a leftfield choice from a browser-based MMORPG developer, for us the transition was actually very natural.

The same requirements apply  the game has to be a fun, accessible, smooth online experience, with lots of replay value, depth and customisation.

Can you talk us through your monetisation model a little bit and explain the thinking behind it?

The most important thing for us when it comes to games is getting people to play them. That's why Runescape has been free-to-play for over a decade  long before MMOs starting dropping mandatory subscription packages.

We know that if you have the right product, you'll find an audience. Moreover, the best way to get an audience to experience your game is to open it up to everybody. So making Carnage Racing a free to play title made sense to us.

The free-to-play experience extends to a limited number of cars, tracks and upgrades, with the full game available to unlock for a modest price - £1.99, or $2.99.

To upgrade or customise your vehicle in game, you spend our virtual currency  Moolah  which can be acquired through gameplay, by simply racing and competing.

Alternatively, you can purchase various packages of currency with real money, although we've been careful to balance the game in such a way that these purchases are a convenience, rather than a necessity to progress.

We don't want monetisation to interrupt the core gameplay experience.

What are the major differences you've found between developing for desktop and for mobile?

It's an obvious response, but the user interface and control functionality is probably the biggest difference, and also the toughest challenge.

You can't simply port a game to mobile and expect everything to work in the same way. You have to tailor it for the individual platform; think about how a mobile user interacts with their phone, and how that differs from a controller or mouse and keyboard setup.

Ultimately, you have to approach a mobile game as a whole new product, otherwise you're always in danger of being lazy with the conversion and making things simply 'work' rather than making them work well.

That can be the difference between success and failure in what is an incredibly competitive market.

How are you going about fixing early teething troubles? I see the game has a number of low reviews due to bugs - what's the plan of action there?

One of the things we were most surprised about when we launched is how many people were playing on incompatible devices, despite clear messaging that defined the game's prerequisites.

This accounted for the majority of issues we saw come through in early reviews and is something we've rectified in our first update, which has recently been released. Outside of that, we've been happy with the game's performance across the board.

We will continue to make improvements over the next few weeks and months as we find ways to optimise the experience. Live data and feedback is integral to that and we will be listening intently.

As for reviews, we've been very pleased with the game's reception. I checked this morning and we're on 4.5 stars so far, and those are ratings direct from our consumers  something I think we can all be proud of.

What are you looking to achieve within the mobile sector?

The videogame industry is changing at an unprecedented rate, and the most successful companies - both critically and financially - tend to be those that adapt to new market conditions, present interesting, new ideas and develop IP that have broad appeal, even outside of videogames.

Taking this into consideration, we fell that the mobile sector is an important, emerging segment for gaming, and with handheld technology becoming more and more powerful, this sector is only likely to increase in prominence.

We want to ensure that as that happens we are not only learning and growing with it, but helping to define how it grows.

That's a great question, especially when you apply it to the industry as a whole.

I think we are all surprised from time to time by the innovation and progress made in both software and hardware. Ouya, Oculus Rift and SteamOS didn't exist twelve months ago. It's anyone's guess what will happen in the next year.

For us though, we have RuneScape which is as strong as it's ever been, Transformers Universe is on the horizon and is a huge title for us, and we are always looking at potential new projects and experiments to get involved in, so keep your eyes open and watch this space.

Thanks to Robert for his time.