Predicts this will be the company's best quarter ever 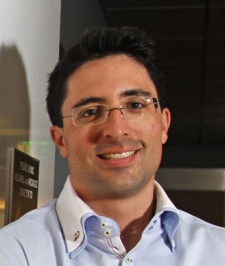 Glu Mobile (NASDAQ: GLUU) hasn't made a profit for as long as anyone can remember.

It's also just closed a surprise $14 million rights issue which got it the cash it needed to continue operations for the next 12 months.

A haunted Halloween for CEO Niccolo de Masi, then?

Actually, no. Talking from the company's San Francisco HQ, de Masi is as enthusiastic as I've ever heard him.

"I'm confident about the future," he says. "This is exciting stuff."

The reason for his optimism is that despite Q3 sales being $21.7 million - down 17 percent year-on-year - not to mention a net loss of $8 million, Glu's just had its most successful game launch ever.

"Deer Hunter 2014 has beaten our previously best launch quarter sales almost three-fold. It's on course to be our biggest title," de Masi reveals.

Indeed, in the key US market, the game has been in the top 10 top grossing chart on iPhone for five weeks and counting. To-date, it's generated $2.7 million in revenue.

It's also had over 4 million daily active players during that period.

Such a launch demonstrates the new reality for mobile companies that if you're lucky enough to have a hit, you can have a big hit.

For de Masi, Deer Hunter 2014's success is more than this, though; it's a vindication of the company's longterm focus on making shooter and action games.

"When you look at consoles, shooters are the core genre. There's a fundamental demand for these games," he says, pointing to the likes of Call of Duty and Halo.

"Over the past year, we've seen a lot of success for strategy, casino and puzzle games on mobile," he continues.

"Glu is the only company that's putting action games into the top grossing charts."

To back up this claim, the company has highlighted what it considers its key brands.

Deer Hunter franchise, which it bought from Atari in April 2012, has been downloaded 63 million times on mobile. The Frontline Commando games have had 55 million downloads, and there's been 27 million for action-slasher brand Eternity Warriors. The third game in that series will be released in Q4.

Meanwhile, the company's most downloaded IP is Contract Killer, which has seen 95 million downloads across four titles.

Also coming in January - one of the 12 or so internally-developed titles Glu will release in 2014 - is RoboCop, which will tie in with the new movie.

Given this situation, it's worth taking a step back to consider Glu Mobile's recent history.

Because, if you look at its annual smartphone gaming revenues, there's an argument that Glu is already a successful company.

Starting with $4.4 million of non-GAAP revenue in 2009, this had grown to $95.8 million in 2012. That's the sort of performance the venture capitalists love to buy into.

The problem, however, is that Glu - which floated on NASDAQ in 2008 - has been 'rebuilding the airplane while inflight' in recent years.

This can be clearly seen from a full graph of total revenues since 2003.

And drilling into more detail in terms of smartphone quarterly revenue, we can also see how the transition from paid to free-to-play games has impacted sales.

These peaked in Q2 2012 at $25 million, but since have been decline, particularly due to Apple stamping down on some of the incentivised monetisation methods Glu had been successfully using in 2012.

Now, however, the company has announced its guidance for Q4, the period October to December 2013 - the white column on the far right.

If met, this would be its strongest quarter of revenue ever - hence de Masi's enthusiasm for the future. Still, his next challenge will be making the company profitable.

Reply
jon jordan
Not sure what you mean? We spoke about some other things but this was the main thrust in terms of Glu's future.
Posted 8 years, 8 months ago

Reply
Guido Warat
is this the full interview?
Posted 8 years, 8 months ago