Who needs screenshots? The perils of launching a 'confidently ugly' word game on iOS 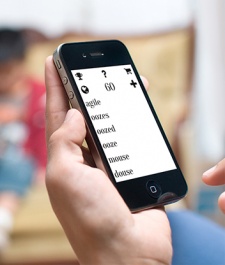 Even if you put aside the fact that Woodlouse Pete Morrish's recently released word game, which charges players with finding words comprised of more vowels than consonants  launched as Xbox One and PS4 were taking the world by storm, the game's debut was never going to be easy.

To put it bluntly, it's hard to gauge Woodlouse's charms until you actually play it.

As a concept, simply entering in vowel-heavy words doesn't sound like the most compelling form of gameplay, and visually, the game resembles the most bizarre shopping list ever.

So how the hell do you sell it? We caught up with Morrish to find out how Woodlouse is performing, and what hurdles he's encountered launching what is  by his own words  a 'confidently ugly' game on iOS.

Pocket Gamer: So, on a marketplace where people are complaining about an inability to get spotted, you decide to launch a game that doesn't translate all too well in screenshots. Are you mad?

Pete Morrish: Um. Yeah, when you put it like that, it doesn't sound like the smartest play in the world, does it? In fairness, though, I think I took a bit of an 'in for a penny, in for a pound' kind of approach.

I decided early on that I wanted to make Woodlouse 'confidently ugly', which is a design trend I'm more-or-less obsessed with at the moment.

A simple, stark and completely unique look and feel fitted in with the way that Jake [Simpson, the other half of the Woodlouse team] and I were forced to approach the game, too.

We knew the core mechanic  just listing vowel-heavy words  was ridiculously strong and compulsive; we also knew, though, that neither of us could commit an awful lot of time to the project.

Woodlouse itself is a very pure expression of its own mechanics; we wanted the UI to reflect this. And to hell with the screenshots!

In all seriousness, how do you approach promoting a game that doesn't rely on visuals to sell it? What has been your marketing strategy?

I knew from the off that Woodlouse was going to be a weird one to market. The very first silicon prototype took a friend of mine just a couple of hours to make - that prototype has since become my most-played game of all time.

That being the case, we couldn't go the normal PR route of previews and showing early builds off publicly  if we were unlucky, our thunder could be stolen by an enterprising coder inside an afternoon. So we knew we had to launch with as big a splash as our limited budget could muster.

We approached Natalie Griffith of Press Space, who specialises in PR for indies, and she worked out a strategy.

We ended up making a professional video to get the point across - a standard screen capture video of Woodlouse wouldn't do us much good - and a video-based press release, and those have both done us a lot of favours.

It's just a pain that our launch window was slap bang in the middle of the two biggest console launches in history.

What reaction have you got from the press? Is it picking it up?

Slow, but steady. The analytics we've got seem to show that somewhere between half and two-thirds of people that fire up the game go on to play it regularly. And Woodlouse is a weird little game  it'll get into your head like nothing else.

There's been some love from a couple of indie-focussed journos, especially Laura Dale, whose interest was piqued by a pincer movement of Nat's playful press release and my video equivalent.

She's been playing heavily, and tweeting about her obsession. That's got the game and me on a couple of podcasts, and people are slowly picking it up.

We always had a sneaky suspicion it could a slow-burner, so we're not too concerned just yet.

Do you think there's a wider problem for games that, for want of a better phrase, don't fit the promo mould? We've encountered games based around sound, location or AR that  in a similar manner  don't screenshot too well. Or do you see it as an advantage?

I don't think that an inability to screenshot well is, or can be, an advantage in itself, no, but I do think it forces developers' hands in other ways  some of which may be advantageous.

With Woodlouse, for instance, it really forced us to think about how else we could get the game's personality across. I wanted the game to be stark and standoffish, but also weirdly friendly and welcoming, and I think the UI and UX  stark, monochrome, brave, fluid  just about pulls that off.

The logo is abstract but oddly friendly, our font is warm, and the iPhone 5C colour modes we've got in the game show a playful side. The aesthetic is carried across to everything else about the game, too  the website, business cards, videos, everything.

I'm not sure that the consistent expression of the 'confidently ugly' aesthetic would have come about were it not for Woodlouse being the result of a single strong vision.

Would you consider changing the appearance of the game in the future if downloads trail off?

No! There's a purity about Woodlouse that is key to its personality. It needs to stay stark and spiky and ugly.

Thanks to Pete for his time.