We want to make developers' lives better: Helgason and Laakkonen lift the lid on Unity's move for Applifier

Applifier man to step up as Unity VP 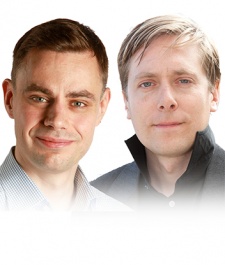 If there's one thing the people behind Unity's acquisition of Applifierwould like you to know, it's the fact that the latter's video gameplay platform Everyplay will not become a Unity-branded service.

If there's another, it's that both Everyplay and Unity are going to continue to grow - and that's in the best interests of developers and players alike.

Speaking with Unity CEO David Helgason and Apllifier CEO Jussi Laakkonen after the acquisition was announced, the tone was the same sort you'd expect to hear from two friends out at the pub.

There was no doublespeak, few - if any - veiled words, and underneath it all was a spirit of mutual optimism.

Still, there were a great many questions hanging over the recent deal, so we asked Helgason and Laakkonen to discuss what Applifier means to the future of Unity, and just what that future has in store for Everyplay as we know it.

Pocket Gamer: Unity isn't a very acquisitive company - what was the background for the acquisition of Applifier?

David Helgason: There are two big challenges that a developer faces - building the game, and being successful with that, and the other is connecting with an audience. We haven't don't all that much to help in this area.

Late last year, we announced that wed build a cross-promotion network to help developers trade amongst each other and we were really excited about that.

However, of all the ways to connect with audiences - from hoping to be in the top ten to buying traffic - the one single way that we found to be the most exciting and authentic is Everyplay.

How did this deal come about?

DH: We've been searching for interesting solutions to the problem of connecting with audiences for awhile, and most of the solutions we've found just weren't very exciting - and many of them didn't actually work.

Others are run by companies with a different culture than what we're looking for. Jussi's been building an amazing company for, what, four years now? Five?

DH: Wow! Well, all good things take time to build. Anyway, Jussi has a game development background and is unbelievably passionate, like us, about making developers' lives better.

There's a lot of affinity between us. And when Jussi first showed me Everyplay a year-and-a-half ago, what did I say Jussi?

JL: This was at Unite 2012 in Amsterdam where we were coming up with demos, we had a meeting, and he said 'Jussi, you've really made it now' - and, I guess that was a pretty good prediction, even though it's taken us a while to get to this point.

There's been a lot of mutual admiration between us over the years.

DH: When I saw Everyplay the first time, I was really excited - and it solved such a complicated technical problem, recording videos while the game's running without losing framerate.

And what happened over the year-and-a-half since I first saw Everyplay was that it became incredibly successful, and it's really fostered a massive community thats growing quickly.

In retrospect, you think 'how did games not have this before?' - it's like watching sports without instant replay. Wonderful, and rare, things happen when people play games, and if you can't share those moments then a lot of value is lost.

JL: I remembered, as we were doing this deal, that Carter Dotson wrote an article about how video sharing needs to be widely adopted in order to be something that really becomes popular - and I think he hit the nail on the head there. This deal represents wider adoption.

How easily will Everyplay integrate with a Unity game?

DH: There's an SDK that you can download off of our asset store already, and it's a two-minute integration.

JL: Our goal is to go from the current two-minute integration to making it a one-second integration. That will take some time to happen, but we'll get there

Will Everyplay be Unity-exclusive moving forward?

DH: Absolutely not. That would almost as insane as saying that Unity can only be used by people that have brown hair.

We love Unity, because it's a tool to help developers become successful, but there are in-house, open source, and commercial engines that serve specific needs and we know that we can't serve every single need.

We can serve most needs, but those who can't be served by Unity should still have access to Unity and GameAds.

Everyplay's already supporting multiple engines and, going forward, we want to invest more in that, not less.

JL: The one thing about wider adoption that I mentioned earlier is that while we want Everyplay widely adopted in the Unity community, we're not dropping support for anything.

If anything, we're expanding to engines that we haven't been able to support before. For iOS and Android, our goal is to provide Unity to everyone whether they're on a custom engine, an open source engine, or even a commercial engine.

DH: It's quite different, even though - in the end - it serves the same purpose of finding a broader audience.

JL: Overall, we have some background in cross-promotion. Our video ads are a continuation and expansion of what Unity Cloud already does. So it's going to work seamlessly alongside that.

With video, you have this unique property of being able to really show what a game is. For example, if you see a 15-second gameplay video of Clash of Clans you'll get what the game is about - and you'll know whether you want to play or not.

This impacts user acquisition. The qualification and engagement players get from seeing a video - when they're super-excited before they even start playing - that leads to higher quality users. What that means for people who monetise off of this is higher CPMs.

So, in this sense, Everyplay and Unity Cloud will work side by side.

What will Jussi's role moving forward?

DH: Jussi's going to be an executive VP at Unity, and he'll help run the company, and he's also going to be the general manager of the Everyplay business.

Jussi: So, I get a lot more work is what it sounds like. [Laughs]. I can outsource some of the HR, legal, and finance stuff but I'm really excited to be joining the Unity team.

And at the same time, the Everyplay team is continuing to grow - and not just in Helsinki. We just opened a new office in Seoul, which will now work together with Unity, and we have our first branch in Tokyo.

We're definitely growing and hiring - so coders, send in your resumes. We have positions for you at Unity and Helsinki.

DH: Zooming out a bit, we're seeing this incredible marketplace emerge - and, bear with me here - if you look back 15-20 years ago, the biggest audience you could address at once was US prime time television.

So, you'd buy these insanely expensive ads and be found by maybe a hundred million people. And then, the internet came but it never really achieved the same frictionlessness that you see in mobile app stores.

That space, mobile, is now completely frictionless. You can reach over two billion people around the world on these devices and that's growing still at a breakneck pace. That's 20 times the audience that you could have had 15 years ago - and the insanity of that figure has to give you pause.

There's unbelievable potential for people with a great product, but it's going to be complicated because you can't buy broad ads across the entire mobile space that'll each everyone.

So, instead, what needs to happen is we have to get better tools to connect the wonderful products to the people that might care about them.

Being gamers and being inside the games industry, we know that not every game is going to speak to every person in the world - so we need to find channels and ways for the great games to connect with the audience that wants that game.

And I think Everyplay has the potential to be the very best way to do that.

Thanks to David and Jussi for their time.