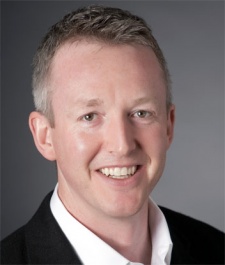 Having matured as a US-focused gaming network on Windows PC - it was set up by ex-Microsoft staff, after all - recent years have seen WildTangent making the jump to mobile.

It launched a version of its platform for Android devices in 2011, although given format restrictions, it's only available as web install, not directly via Google Play.

It's also started releasing some games direct on the App Store and Google Play, including Polar Bowler, featuring its iconic polar bear character.

Good timing then to sit down with Sean Vanderdasson, WildTangent's SVP of Games Service, and co-founder of the platform's WildCoins virtual currency.

Pocket Gamer: You've recently moved into the mobile space so how's that going?

Sean Vanderdasson: We've been doing PC for 15 years and then announced our Android partnership with Sony at Mobile World Congress 2013. This year we're talking about its phenomenal growth.

If you look at the evolution of the mobile space, three years ago, carriers and hardware manufacturers said "We're going to do this all ourselves" and they tried to build their own app stores.

They found out that's really expensive: it sucks, it's painful, and it's not very efficient. So then they cleaned house, and spent the last year trying to find a way to work with Google, because there wasn't any other option.

And so in 2014 what we're really seeing is that, one, there wasn't really any revenue opportunities with Google, and two, Samsung and Google signing a deal means the arms race is over.

For us, after the Sony announcement, we got on the radar, so over the past 12 months it's been a case of those companies saying "We need to do this. Let's sign up WildTangent".

That's the impetus for this dramatic growth that we're having.

What lessons do you take from your experience of the PC space?

Typically on PC, when you sit down and play games, you exclude everything else. You're fixated on playing a game for 34 minutes. That's what the casual gamer - on average - plays.

Mobile is about these little whispers of time - I've got eight minutes here, I've got five minutes there - and so the user wants that immediate engagement. They want to be able to start and play something right now, they don't want to be waiting to be downloading something new.

That access is an opportunity to monetise, in the right way.

You don't always have to be up-selling an in-game item. You've got cash rich/time poor players but also cash poor/time rich players, so you need to give the consumer the choice of how they want to engage, and then put appropriate controls in there so that monetisation is appropriate - not the maximum you could generate, but appropriate for the value that you're giving to them.

For example, you could be wanting to play Game A, then you see a pre-roll ad that says "Hey, here are five other games that if you like Game A, you might also enjoy".

We've been doing that for quite a while, we have phenomenal take-up rates, and the gameplay time goes through the roof too because it's about access, it's immediately available, it's not about the artificial selectiveness of charts.

Given you're a standalone platform, what's your relationship like with companies such as Apple?

We have a good relationship with Apple. We work with them in two ways out of the three possible.

Our ad solution is available inside of our own games that are distributed on iOS. BrandBoost, our ad platform, is also available in titles made by other game developers, so the only thing that isn't available on Apple is our game service That obviously would be a violation of their policy.

Do you think it's foolish of Apple to not allow companies like WildTangent into the App Store?

Their mantra has always been closed, protect the user experience as much as possible, right? Apps are an evolution of that. With HTML5 scaling the right way then they would lose that commerce relationship, because you could go through - effectively - a website to purchase.

I think Apple has a bigger game at play: I think they want to be the credit card processor. They've got enough money in order to bank roll it, and there's so much more money to be made by being the processor of every transaction. And I can see that controlling that experience, that's the holy grail for them. And they can let all the other companies go out and do NFC and do the investments inside of retail stores, and then they can come in there with a solution.

You look at all their patent filing, they're definitely marching in that direction, very quietly, but we're certainly seeing it.

They smacked down Tapjoy for a reason, right? But they've also had their own challenges on iAd. They had minimum buys, and it wasn't able to scale. So they've made their trade-offs.

For those markets to work for us, we need certain things to be in place. The advertising market in Asia is still very immature in its growth and in its cycle. But as those mature then our service certainly becomes much more relevant.

The market shifts too quickly and then you're in a really awkward reinventing position, and you see a lot of companies that use to be a game developer, now they're a CPI network, and now they do video ads etc.

I understand the pivot but why don't you just think further out to begin with?

So we're cautious on when we want to go. We've foregone several opportunities, China being one of them, because we're looking to ensure there's an advertising solution in place that will provide the user experience we want that will scale.

We've been in China before, we're in Korea, we're in other markets like India. Latin America looks very attractive to us, I think there are some big growth opportunities there that look very interesting. You look at North Africa, Morocco, those areas could be interesting.

You've had a lot of success with Microsoft on PC, so what's the strategy with Windows Phone?

They've got an interesting market share in Europe. They're 10+ percent. We're a stone's throw away from Microsoft's HQ. We've had conversations with them in the past, not only from a "Hey, look we have a game service, we can bring games to the Windows Phone market" angle.

A second win is that our game service provides something that's differentiated. In the US, which has historically been our bread and butter, Windows Phone has a sub-3 percent market share. So they've got some challenges, but I think their new strategy of an Android device with a Windows UI is a brilliant one, because if you ask users what type of OS they have, they say "I have a Samsung".

I think there are two key consumer thoughts about Windows Phone. One is that they like the live tiles, but the other is "If it crashes, do I get a blue screen of death?"

I think that's probably a paranoia thing. But whether it's legitimate or not, when you think Windows you do make associations...

Back in the day I was foolish enough to buy a PC with Windows ME...

But it does seem like there's a gigantic opportunity for a games platform to come into the Windows Phone space and provide a whole suite of software and games?

Yeah, but the issue is "What is Microsoft's ultimate goal?"

In the past, it was that they wanted to regain their birthright - they saw what Apple had done.

We talked to them in the past and said "If you want the most differentiated solution in the world, you really should be talking with us.

"If you want the ability for a user to download and play any single game in the world, not be required to buy it, download and install it, we have all of those titles available today and have been doing it for years. That would be actually interesting to users."

But if they covet doing it all by themselves, then it comes down to whether you can execute.

The answer so far has been that Microsoft can't on a couple of different fronts. They haven't been able to get developer adoption the way they wanted but they've been able to - it's rumoured - compensate top developers to bring their titles to the platform.

So, if you don't like the war you're in, change the war. Provide something truly innovative and new.

Look at Apple. They purchase or consume a number of companies every year in order to provide new features and functionality. Microsoft may not want to entertain something like that themselves, but they're definitely hitting a point where they're going to become irrelevant.

The war will be over and they might be fourth place in a two man race.