Thrills and kills: How Industrial Toys reimagined the shooter for the touchscreen

5 million ways to accelerate the vision 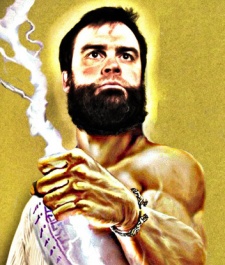 US developer Industrial Toys has been working on its debut game for over two years now.

Called Midnight Star, it's an ambitious attempt to redefine the first-person shooter for touchscreens, as well as pack in a deep narrative backstory; something highlighted by companion app Midnight Rises.

And to ensure the company meets its goals, it's just announced a $5 million funding round, which was lead by Rovio and Supecell investor Accel Partners.

A good opportunity then to talk to president Tim Harris about the challenges so far and the future opportunities.

Pocket Gamer: Given you're almost at launch, why take a funding round now and what are you planning to use the money for?

Tim Harris: When we started seeing what kind of reaction we were getting to Midnight Star from players and user testing, we knew we wanted to go as deep as possible on this project.

Between content creation after launch and supporting the live services of the game, we knew we had an opportunity to accelerate what we're doing with a funding round.

Midnight Star's initial release is just the first chapter in an epic four-chapter arc that will take our main character, Charlie Campbell, through a narrative that sees him trying to save humanity by undoing all sorts of horrible awfulness perpetrated by the bad guys. Add that content plan to all of the fun features we want to create and it made sense to get the resources together to make it happen.

And beyond Midnight Star, we're also eyeing other genres and are pumped at the chance to make more mobile experiences that get under your skin and keep you entertained over time.

Why did you decide to go with Accel Partners?

We've known Accel for a long time and been admirers of their choices and philosophy, but it was our first meeting with Vas Natarajan that made this come together.

When we meet with someone outside the studio, we usually start getting all excited about what we're doing and hope that whoever we're talking to gets it the same way we do. In the case of Vas, he started the conversation and literally outlined the exact points we were getting ready to make to him. Ten minutes into the conversation, we started yelling at him, because we were so obviously on the same page.

What have been the biggest challenges you've experienced so far during development?

It's really challenging to maintain focus on the mobile experience and to constantly ask ourselves if we're making the right design decisions for a mobile device.

We've talked a lot about controls publicly, and that was a big challenge for us - to create a control system that felt awesome and progressed the player through a satisfying skill curve. But it was everything else that cascaded from the decision to focus on a mobile-first experience that was both fun and daunting.

How long should play sessions be? How do you string those together to create immersion? What will players want to compare against each other in passive competition? How should active competition work in an asynchronous mobile world? How do you tell a great story? Does everyone want that story?

Given that this is your first mobile/tablet game, have you been surprised about the differences from console gaming?

We've certainly learned a ton, but I wouldn't say we were surprised - most of us have shipped mobile games in our past lives, so we knew the basics of what we'd be getting into.

I think if anything, it was combining the lessons we've learned over the years about making things fun with playing to the strengths of the mobile platform that gave us the most new insights.

The last high profile tablet game to attempt to redefine FPS on touchscreens was DeNA's The Drowning. What have you learned from its failure?

We like that game a lot - I had a great time playing it, and we share a lot of philosophy with those guys. I'm glad you used "redefine" though, because it underscores what we've been trying to say about the opportunity with Midnight Star.

We've been saying "reimagine" (instead of "redefine" or "reinvent") for a very specific reason. When we imagine what a "shooter" is on touchscreens, it's not a FPS in the traditional - or even console - sense. It's something that gives you the thrills, skills and sense of accomplishment that other shooters give you, but also lets you control, manage and experience the game in a way specific to the touchscreen environment.

You've been developing an interactive novel alongside the game. Do you think that was too ambitious given this is your first mobile project?

Haha, what a question! No, man! At this point in the project, when it's all coming together, I'm tempted to say yes. The reason we made Midnight Rises, the graphic novel app that's alongside the game, is that we hit on something cool when we were world-building.

We realized that not everyone wants to go down the story rabbithole - some people just want to blow the shit out of stuff and that's ok. Some people want to go deep, though. They want to read and explore and learn all the tasty bits. We decided to make those pieces self-serve and from that was born the idea for the graphic novel as a separate application.

Then once we got going on the graphic novel, we realized we could make something special there too, and started baking in all sorts of goodies, John Scalzi wrote branching stories and gave more life to the characters and Mike Choi produced what can only be described as an inappropriate amount of incredible art.

So, um, yes - I suppose it was too ambitious. But we're really happy with it.

You're now entering the beta phase of development. What are the key things you want clarification about?

Flow and loops. We're going to be paying close attention to how players flow through both the campaign content and use the multiplayer functionality. We designed it to encourage both styles of play, but we need to make sure we're doing that effectively.

Also, the game has a healthy RPG layer on it, so beyond the gameplay loops, we'll be making sure level progression feels right, rewards feel good, and the community features are keeping people happy.