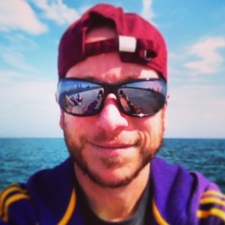 After touching down in London at the start of the year, Pocket Gamer Connects will be making its grand return on the 16-17 June, with the fun set to resume in Helsinki.

There are a few months to go before then, however, so in order to whet your appetite further, we're throwing some of the industry's big names under the PocketGamer.biz spotlight to help you get excited about what we're offering, and find out what makes our speakers tick.

Under the spotlight this week is Nadav Barkama, GM at Spanish indie developer Nafna,Games  and self-styled 'interactive fun designer'. Barkama helped set up NAFNA 8 years ago, and has since then helped Nafna evolve from an e-commerce firm into a game developer with one overriding objective: spreading drops of instant happiness.

Pocket Gamer: First up a quick elevator pitch, tell us who you are and what you do in 50 words or less!

Nadav Barkama: My name is Nadav, and I live in Barcelona with my lovely partner. I love reading, painting, swimming, hiking and playing, and I'm also a neo-anarchist. I've founded Nafna Games after eight years in e-commerce with one motto in mind: Games are fun to make, games are fun to play.

What has been the biggest story in mobile gaming this year, both in general and for your company in particular?

From our indie, and rather humble point of view, the most important story in mobile gaming is the boom and rise of "native advertising" platforms and solutions. In a market dominated by free to play, the ability to monetise from the non-buyer player without disrupting a game's immersion and experience is crucial.

Due to the fact that mobile game distribution will probably stay limited to the two major gaming mobile platforms - the App Store and Google Play - an increase in the diversity of exposure channels is a neccesity if we hope to see a healthy and dynamic tri-class market in which corporate publishers, mid size studios, and indie developers will all have equal opportunities

Products and services vary in quality and price, yet the basics of any durable business interaction is based on human chemistry.

There are an incredible number of amazing, high quality games made by independent studios and one man developers on the market right now, and even though some do manage to climb up the charts, smaller developers are still struggling to attract audiences from outside of the indie community.

Products and services vary in quality and price, yet the basics of any durable business interaction is based on human chemistry. Our objectives at Pocket Gamer Connects, is precisely that: connect with the human side of this digital industry.

Smash Hit by Mediocre, though not for its beautiful simple clean design, its addictive gameplay, or its great soundtrack and sense of rhythm. No, what most impressed me and 'filled me with joy' is the success of its simple business model, which is a modern adaptation of freemium: no ads and only one single, very defined, IAP.

Finally, in 140 characters describe what you think the hot topic in mobile gaming will be in the next 6 months and why that’s the case.

Helsinki hype: 10 reasons why you need to pick up a pass for Pocket Gamer Connects