Amazon: People shouldn't have to pay $500 just to play games in the living room

Catering to an audience of millions 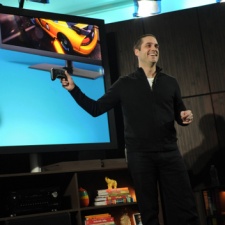 One of the biggest gaming surprises of this past spring was Amazon's unveiling of Fire TV.

As a hybrid media-streaming device with integrated microconsole gaming capabilities, we were interested in it from the outset - but we had a few lingering questions after spent some time with it. Namely, we couldn't figure who the device was right for.

We caught up with Mike Frazzini, vice president of Amazon Games, to talk about Fire TV, who its target audience is, and how important gaming was to the development of the device.

Pocket Gamer: Fire TV is described as being "great for gaming, too" - how important was gaming to the development and marketing of the Fire TV?

Mike Frazzini: Set-top boxes and gaming consoles have been around for a while – we’ve sold millions of them on Amazon. And because we’ve sold millions, we’ve also received a lot of feedback from customers. Customers have consistently told us that set-top boxes do some things well, and other things not as well.

From a gaming perspective what we heard from customers is that millions of people own game consoles and they love them.

But many more millions don't have game consoles because they either can't afford them or don't want to pay $500-600 for a console and $50-60 per game. These people now have to move to play on their smart phone or tablet. A lot of them would actually like to play in their living room.

With Fire TV, we thought about games right from the very beginning. We wanted to build a streaming media device that offered customers a wide variety of games that are fun and immersive at affordable prices.

Who is the target audience for the Fire TV, and who do you see being the most excited over its gaming capabilities?

We think the target audience for Fire TV is anyone who likes to sit back and relax and watch a good or bad movie or TV show or video. There's no other device on the market that offers this range of entertainment for just $99.

We thought about games right from the very beginning

Gaming is a great bonus on top of all the content available on Fire TV. Lots of customers will buy a Fire TV to play games, and lots of them will discover the wide variety of games that are affordably priced and love the experience in their living rooms.

Is it more accurate to describe the Fire TV as a digital content streaming solution that can play games, or is it more of a gaming microconsole that can also stream content?

I don't think it’s an either or. Since the launch of Fire TV, customers have told us they enjoy streaming great content and the wide range of high quality games available.

We think Fire TV can help fill the gap that we see between casual games and triple-A games in the living room and that there’s a lot of room for fun, creative games with fluid graphics that provide a great living room gaming experience, but without the $500 price point.

The Android microconsole market has been pretty tepid to date, what’s the Fire TV’s strategy to lure gamers - and developers - to this space?

We've been talking to developers about Fire TV for quite some time and almost across the board, when they saw the device and the quality of games being developed for it, they were very excited.

The developers we have on the platform span the gamut from Mojang, Telltale, and Frogmind to developers like EA, 2K and Sega. The feedback from customers so far has been that they're really pleased with the lineup that they saw at launch and that the quality of the games is very high.

In addition, we’ve been investing in our own game development at Amazon Game Studios for a number of years.

There’s a lot of room for fun, creative games with fluid graphics that provide a great living room gaming experience, but without the $500 price point.

With games like Sev Zero, we wanted to build a game that we thought was super fun and that customers would love, but we also wanted the game to serve as an example to developers of the type of quality game that can be built for Fire TV.

Finally, we invest heavily in working with developers to get them the right level of exposure on our platform. Some of that is automated merchandising, that they can get through programs like Appstore Developer Select, and others are manual merchandising. Overall this increases their ability to be discovered by customers and their ability to monetize their games on Fire TV.

Sev Zero is an interesting debut title for an exclusive game - why did you choose to go with a shooter for its premiere launch title?

We think it's a fun game, and it really seems to capture people's attention when they play together with the Kindle Fire in co-op mode.

It's a creative mash-up of two beloved genres, tower defense and shooter, and it adds something to the mix, like dropping down into the action at any point while you man the towers. We're already hearing great customer feedback.

In development, we have a number of different titles, in different genres and gameplay, and we think we are adding a lot of value to the choices customers have.

How necessary is the Amazon Fire Game Controller to the gaming experience on the Fire TV?

We wanted to make gaming on Fire TV approachable for a wide range of customers, so we've provided several controller options.

We have the Fire TV remote, which you can use to play lots of games that are approachable and fun. Some customers will want to play games for hours on end and for them we developed the Fire Game Controller, which will be very familiar to them if they've used game controllers in the past.

Overall, we wanted it to be easy for all types of customers to just get to gaming on Fire TV, regardless of their level of experience.

What sort of exclusive games can the Fire TV faithful expect to see in the year ahead?

We don't like to predict the future, but we’ve had a ton of interest from developers since the launch of Fire TV, and of course, we are developing our own games too. We think with both we're going to be able to get great content into the hands of customers.