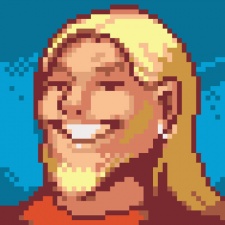 Jiri Kupiainen is the founder of Shark Punch, a transatlantic game development company working on a game about bank robberies in the 1970s.

It's also been fascinating to see how mainstream Supercell's games have become here in the US. Whenever there's a TV, there's a good chance a Clash of Clans ad will be running on it.

As for our company, it's of course our April Fools' game Kitten Getaway. Pretty good for a couple of days of work!

The amount of companies competing for the same customers is just mental. Discovery and user acquisition will be super tricky for everyone, but especially new companies that don't have an existing user base they can leverage.

The biggest opportunities are in games about cats. We've reached 'Peak Bird'.

Indie developers should take their time and build their user base on platforms where it's easier to reach a sizable audience, and only make the jump to mobile once they know they have a good product that they can monetize.

[Indies should] only make the jump to mobile once they know they have a good product they can monetize.

Local multiplayer is a big thing in the indie scene right now - hopefully we'll see more games like Spaceteam from indie developers in the near future.

What is your advice for developers looking to make their games a hit in emerging territories?

The Finnish games scene looks absolutely mental looking at it from San Francisco.

I think there's going to be a whole bunch of great new development teams that I haven't even heard about yet.

When the 'next Rovio' releases its first title, many people will be there to say "I told you so" regardless of the outcome...