Evolution of the mobile publisher: The Chillingo interview, part 2

What's that? Chillingo is evolving? 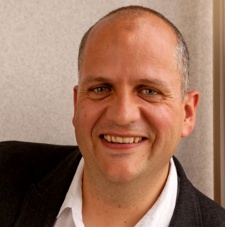 Welcome back to part two of our interview with Chillingo general manager Ed Rumley, the man who's played an intregal role in turning the publisher into the global name it is today.

If you missed the first part of our interview, you should probably click here and fill in the blanks. For those of you already up to speed, let's dive right back in and pick Rumley's brain on everything from publisher needs, to the rise of wearables and VR tech.

When it comes to reaching those devs, who do you think of as your competition these days? Does Chillingo have a direct rival?

Ed Rumley: I don't think there is a company that's as clearly black and white as Chillingo, that knows the indie developers and is right in the middle of this market. That's the most telling thing that I talk about - we're at the centre of the indie developer, not at the centre of third-party distribution. That's our core business – that's what we do.

Are there other companies out there who are distributing games? The answer is yes, but not as their core business. We're doing very well, we've had a great year – we had an amazing year last year and we're on track to have another great year this year, everything is coming together in the business. We've reinvented ourselves for that freemium business and it's going well.

What I know is, it's a small industry and you talk to a lot of our competitors, and I know they respect Chillingo's business. You've got to remember, if you go back, Chillingo is 11 years old now, and Jo and Chris, they founded that business about the indie developer. We've never lost that culture, and it takes years and years and years of heritage. We built that up.

Talking of your relationships with developers, a year or so ago all of the talk seemed to be of how developers didn't need publishers – they could go it alone. That seems to have faded now and publishers are very much in vogue. Did you have to alter your approach to win developers back? Or was that was a natural shift?

I think if you look at the history of the App Store over five years, there's probably always been peaks, troughs and waves.

If you look at those waves, you could have said "hey, look at the App Store, we don't need publishers anymore.", or when large organisations were out there with their big games for $12 or $13, or you had indie developers in their race to the bottom. When they got to the bottom they were like "ahh, okay, it all becomes a bit more challenging now."

You'll remember Chillingo had the Crystal platform.There was OpenFeint, there was Plus+... it was a phase, because there wasn't an open platform, there wasn't Facebook Connect, there wasn't Game Center, these technologies weren't out there and a lot of people started to come to companies like Chillingo for the technological help.

The market is about sales, it's about technology, and there's probably always a few different changes.

They built this Crystal platform to help indie developers, but that came and went.

Actually, that platform evolved into something we call Pop the Offer – it's advertising bubbles we have around the screen and they help with what the developer really wants now, which is cross promotion. They're all interactive, you can flick them around the screen, and if you pop it, it takes you straight to the store. We will give billions of impressions this year on that, so it's a very powerful tool.

But yes, going back to what we were talking about before, it's about sales, it's about technology, and there's probably always a few different changes – it's a fast paced market. But I would say where we are now, the revenue on the App Store is floating to the top, we know there's big players out there and people are aware of that. People are well and truly aware that it's a challenging market.

Shifting to the future a little, what's your take on VR headsets and wearables? Is this something Chillingo is looking to get involved with?

Look, I'm a technology geek – I love it, I love gadgets and stuff. If you look at wearables, wearables are going to be huge. It's as simple as that. People talk about the 'internet of things', and I think wearables will be staggeringly huge. Is there an opportunity for games? I think 100 percent yes. Will we support wearables in the future? You know, I just can't see how we can't.

I think every single company in the future will have to, because if watches become popular – I'm not saying something wants to go and play Street Kart, Gang of Pirates or Iron Force on a watch, no, but do I want to be a situation where I get an alert telling me someone is challenging me to a battle or something like that? All of a sudden, it's part of the whole ecosystem of your hardware.

I love the fact that my iPhone talks to my iPad, talks to my computer – they all synchronise and any screen you pick up has something relevant for you, and a watch is a screen.

How difficult is it though seeing what's coming next and deciding when to jump in?

It's a good question. Actually, our number one priority in all cases is the developer. We are fortunate that, one of the areas EA represents us is on the OEM side of the business, so all of the massive hardware manufacturers that you know, EA has dedicated account managers and teams just working with those companies. They're always looking at the latest technologies and the latest thing.

So there are always lots of opportunities coming through the door that way. But we're always up front with the developer, and if it's not about money we will say "look, you've got limited bandwidth, we don't know how much money there is here, there may not be much", but we're always transparent, but some developers will want to go on new platforms for different reasons, whether it be brand exposure or whatever.

I remember having these kind of conversations about smart TVs two or three years ago, however, when everyone appeared dead sure they were going to be massive, and that arguably hasn't happened. Do you think they will become a thing again in the future?

And does that mean the industry – mobile, console, TV – is converging, or is that too grand a statement right now?

I think that's too grand a statement. Listen, all these markets – mobile, console – they're all different right now, but what is happening is screens – tablets and phones. Are we in a situation right now where the TV in the lounge is drawing everything together? The answer is no – at the moment I carry on playing my Xbox One and I love it and I carry on playing my iPhone and I love it. They're different experiences and they haven't yet collided.

Thanks to Ed for his time.

Evolution of the mobile publisher: The Chillingo interview, part 1