Donald and Laura Mustard look back with pride 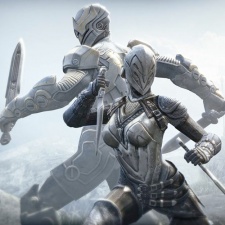 All good things must come to an end, they say.

And that's the case with Chair Entertainment's Infinity Blade trilogy.

The release of the Kingdom Come update - new enemies, new maps, new items, new tournaments, new achievements etc - marks the end of over four years of work from the Salt Lake City developer, which is owned by Epic Games.

Of course, where there's demand, no good thing ever comes to an end.

It's just that after four years and tens of millions of downloads - there's no official total, but Donald quotes "50 million players" several times in our conversation - this part of the Infinity Blade experience is over.

Indeed, Chair has already started on its next project.

"We're in the early prototype stage, but we can already see the magic," Mustard says, adding somewhat enthusiastically, "Our next IP will change the world."

He won't say anything more on the subject, and anyhow, our interview is set up to look back at Infinity Blade.

"It has been a rare opportunity to make a game exactly the way I wanted it to be made," Mustard continues.

"And to be successful doing it has been amazing, so it's bittersweet to be finishing the trilogy."

Indeed, thinking back to 2010, Chair Entertainment wasn't a game studio anyone would have considered to be at the forefront of mobile development. Mainly because it wasn't.

"We'd never made a mobile game before," points out Chair's head of communications Laura Mustard.

"But we did have some ideas."

And, significantly, Chair didn't get too much say in the decision to go mobile.

"At the time, we were working on Shadow Complex 2 - which was amazing, but never released," Donald Mustard recalls.

"I remember I was playing Mass Effect 2 on my console and Sword & Poker on my iPhone, but I was spending more and more time on my iPhone. It was an epiphany for me about of the future of gaming.

"Then Apple approached Epic to get Unreal 3 running on iOS. Then Steve Jobs asked if we could get something together in five weeks. It was too big an opportunity to pass up."

The result of that 'five week request' was the Project Sword demo as revealed at Apple's iPod touch press event on 1 September 2010.

"We had the idea for a sword-fighting game which was more than just clicking buttons," Donald Mustard says.

"We knew there was nothing like it on mobile in terms of the level of graphics and the tight timing of gameplay, but equally it wasn't about making a console experience for mobile but what can we do that's unique for mobile?"

Still, given the nascent state of iOS gaming, it wasn't clear how big Infinity Blade would become.

"We had no idea how many copies we would sell," Donald Mustard says, when the game was released on 4 December 2010.

"When we were asked how many copies it would sell, we looked around the office, and thought 'At least 12'."

Despite that lack of knowledge, however, the game was created with the hooks that could extend into a trilogy, should the opportunity arise.

"We were always confident other gamers would enjoy it," says Laura Mustard.

Yet, there was one surprising request that Chair quickly starting receiving from players.

We were getting hundreds of emails every day asking for the ability to buy gold.

"We were getting hundreds of emails every day asking for the ability to buy gold," Donald Mustard reveals, of the in-game currency you earn through playing and use to upgrade and buy new weapons and armor.

"This was a foreign concept to me but we added it into the first update, and from day one, players were buying hundreds of thousands of dollars of gold."

Indeed, seven months after release, Epic announced that post-update 44 percent of revenue generated by Infinity Blade came from the in-app purchasing of gold.

All of the Infinity Blade games have IAPs, although the first two had a simple single currency system with a maximum purchase of $49.99. Infinity Blade III has a much more complex IAP economy, with two hard currencies, a maximum IAP price of $99.99, as well as randomised drops and time-based crafting.

"I've always balanced the value of the game," says Donald Mustard. "You pay for the full experience. There aren't any paywalls and after 8-10 hours of play, you'll have enough resources to buy the Infinity Blade.

"We haven't tried to squeeze players. We've certainly left money on the table."

And to that extent, the paid aspect of Infinity Blade III - criticised by some - is just a byproduct of how the trilogy started.

Yet, despite their similarities, the most interesting about the Infinity Blade games is their differences.

Unsurprisingly, the audio-visual quality of the games has risen to match Apple's hardware, resulting in a three-fold increase in file size - from 595MB to 1.8GB.

We're mentioned the change in IAP economy, but despite this - thanks to its price - Infinity Blade III was the only game in the series not to hit the #1 spot on the US iPad chart. Back in 2010, there weren't free-to-play games such as Clash of Clans and Game of War stuck to the top of the charts.

Laura Mustard agrees that the market has changed - "there's a new audience and an old audience consuming content in a different way" - also adding that Chair has changed too.

"We're a much better developer now," she says.

Donald Mustard highlights the multiplayer modes of Infinity Blades I and II, as an example of how it's learned to meet its audience.

"In Infinity Blade I, we had a more traditional synchronous multiplayer experience. It was awesome," he says.

And it's this sort of interaction and scale that seems to be the strongest conclusion from the Infinity Blade trilogy, and perhaps where Chair will head next.

"It's all about providing meaningful gameplay experience in all time zones," Donald Mustard says, pointing out that there are more than 10 million Infinity Blade players in China, with Japan and Korea also strong markets outside the expected North American-west European territories.