Rethinking MOBAs based on first principles and brutal player feedback 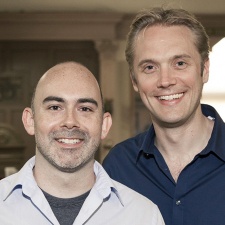 You know your game company has come of age on the global stage when you get an invitation to appear in an Apple keynote.

Truth is these showcases have become more rare for gamemakers over the years; a trend that makes Super Evil Megacorp's presentation of Vainglory as part of the iPhone 6 reveal this week even more special.

Yet, as I suggested to CEO Bo Daly (left in the profile photo) and COO Kristian Segerstrale, it must be galling to showcase your new game to the world and not also have it live on the App Store.

After all, for better or worst, U2's appearance at the event was backed by the unheralded (and perhaps unwanted) appearance of its new album in our iTunes accounts.

"While we were incredibly excited to show Vainglory, we are not interesting in rushing anything for the short-term," says Segerstrale.

"We're working on a game we expect to be building for years, decades."

It's this attention to play the long game that Segerstrale says will set Vainglory apart from the many previous attempts to transfer the success of PC MOBA games like League of Legends and DOTA 2 from mouse and keyboard to touchscreen.

Indeed, given the overwhelming failures to-date, it's tempting to suggest that, like first-person shooters, the MOBA genre is one that will never successfully make the transition to mobile devices, commercially or critically.

Unsurprisingly, this is not a train of thought that Daly is willing to engage in.

"We have our own game engine that's designed specifically for this style of play, and we've really focused on precise, accurate controls," he says.

"As much as possible, we're removing the device from the equation."

Combined with this is Super Evil Megacorp's staff composition, which includes people from PC MOBA developers like Riot, not to mention the usual array of triple-A console guys.

But, perhaps more important than this foundation, is a from-the-ground-up attitude towards re-building a MOBA for mobile devices and their all-important usage patterns.

"Vainglory is not a casual version of a MOBA for touchscreens," Segerstrale states.

"And our designers aren't being inspired by other games. The design team is starting from first principles in terms of how MOBA game would best work on tablets.

Part of this is encouraging players to play together in the same physical location; something highlighted in one of Vainglory's pre-launch trailers.

To prove - or test - its mettle the game has also been live in small test markets in south east Asia since the start of 2014.

Cleverly, once it had enough players Super Evil removed the game from these App Stores to enable more control over the beta process, as well as reducing wider visibility.

"We're incredibly mindful of how demanding players are in that region," says Segerstrale.

We're incredibly mindful of how demanding players are.

"It's been a great experience in terms of tuning the gameplay and getting the right balance. We've had tens of thousands of players and over 17,000 comments on our forums.

"Some of it is brutal, but the sheer level of passion gives us some cautious optimism we're heading in the right direction."

It's not our game

And, more generally, external to the game itself - which is pencilled in to be rolled out in those southeast Asia countries during October, followed by North America - Super Evil is proud of how it's working with the wider MOBA community.

Daly points to the fact that Vainglory is the only touchscreen MOBA to be supported by the community hub MOBAfire.

"This underlines our credibility in the community," he says.

"It gives us some confidence, but we have no illusions about success.

"That will only come from our desire to do what's best for the players and working with them going forward."