Games are a drag: How Kitty Powers is glamming up the App Store 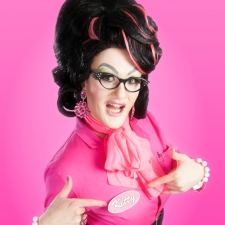 Despite the typically hectic nature of EGX in Earl's Court, gamers wandering around the Rezzed stand couldn't help but notice Kitty Powers.

Powers, played by Magic Notion founder and creative director Richard Franke, is no wallflower, towering above the majority of folk thanks to her sky high wig.

She's also the drag queen charged with hosting Kitty Powers' Matchmaker on iOS, which was undoubtedly one of the stand out draws in what was a packed indie section at the event.

But why deploy a drag queen as the lead star in a dating simulator? Have we reached the day where a drag act can be considered an asset in an ever crowded App Store?

Pocket Gamer: How did Kitty Powers Matchmaker come about?

Richard Franke: After making games for other people for so long, I really wanted to have more creative freedom to make the games I wanted.

Kitty Powers Matchmaker started with a challenge we set ourselves. We wanted to make something that didn't rely on killing or destruction, in fact quite the opposite. Could we make a satisfying game about love and making babies?

There were a bunch of other tick boxes we wanted to hit, such as inclusivity, accessibility, procedural systems - which I love - and also a sense of humour. Usually once I know what I want a game to deliver, the ideas tend to fall into place fairly naturally. That makes it sound easy, which I assure you it wasn't.

Little over a week ago you were at EGX being interview by mainstream media as Kitty Powers. Do you think this is something that could have happened even a few years back?

A lot has happened in the last few years in our industry. A few years ago, Kitty and the game would have been considered avant garde or alternative. The recent explosion of indie game developers has definitely led to more experimental products and a far more open minded audience.

Being an eight foot tall glamazon tends to elicit either stunned amazement, giddy excitement, or a speedy exit from most people.

Drag and video games are both more mainstream than they used to be, so I guess it was only a matter of time before we married the two together. In a way it's just a form of cosplay, which in our industry is not a big deal at all.

Matchmaker is a game that could, in theory, have been 'hosted' by anyone. What do you think Kitty Powers brings to the table that other characters wouldn’t?

I've been doing Kitty Powers for a few years now, so it seemed like too good an opportunity to miss, since I had a drag queen at my disposal, and was making a game that she would fit into pretty well.

She is the embodiment of my stupid sense of humour, and I did want that to feature in the game. It had never been done before, which was a big plus, and drag queens make great hosts, so it just felt like a perfect fit. Kitty’s identity is so unique that no other character would be able to replace her. The game was built with her in mind so they complement each other perfectly.

You spent four days dressed as Kitty at EGX talking to gamers in the Rezzed indie section. Apart fromwig-induced head sweat, what did you take away from it? What reaction were you getting from people?

I've never had a negative reaction in drag, and EGX was no exception. Being an eight foot tall glamazon tends to elicit either stunned amazement, giddy excitement, or a speedy exit from most people, and it’s fun to see who does what when you hove into view.

A lot of people passed by our booth, and almost everyone seemed very excited to meet Kitty. A few just ran away, but there was no negativity. Kitty felt very welcome, it was people's reactions that kept me sane during those four long days in high heels and a wig that was trying to swallow my head.

Speaking more broadly, why do you think it is that there are still comparatively so few games – mobile or otherwise – that come with an LGBT flavour?

This is a very interesting question as I never wanted Kitty Powers' Matchmaker to be thought of as 'LGBT'. It represents everyone fairly, without making a song and dance about it. Even Kitty Powers does not make it a 'gay' game. She's a drag queen. Nobody ever called Blankety Blank a 'gay TV show' because Lily Savage was the host.

On the whole, I think making 'LGBT flavoured games' is a bad idea.

Getting off my high horse for a moment, it's only games where relationships are actually represented that LGBT content is even an issue. On the whole, I think making 'LGBT flavoured games' is a bad idea. It only serves to highlight the difference between people. Just because a game has LGBT content in it, doesn't mean it's an LGBT game.

Mass Effect is not an 'LGBT game' and neither is The Sims yet both include LGBT content. Making 'inclusive games' should be the future, especially with all the #GamerGate controversy of late. I believe that games should represent everyone fairly. It's only by making games (and other media) more fair and equal that the world will follow suit.

It's important to mention here that I think there is however a necessary place in educational software for LGBT themes. Games such as Dys4ia have a vital role to play and are important in enlightening people to what it means to be transsexual, gay or bisexual.

How easy is it to stand out on a marketplace as crowded as the App Store?

Very hard - that's why I stuck a drag queen in my game! It has helped to some extent, but it’s important for up and coming developers to realise that making the game is only half the battle.

Engaging the audience is a whole other challenge. It's important to network and develop relationships with the community and the press to get your game noticed and talked about.

Utilise social media and all that jazz. But the thing is that everyone is doing that now, so you still need to have a hook. Don't just tick the boxes. Do something unique and interesting to stand out from the crowd.

Is this an IP you can see expanding?

There is certainly room to expand and we are planning to add more content to Matchmaker in the new year.

We could certainly turn Kitty into the drag equivalent of Cooking Mama if that's what people want, though I think that could get boring. Plus we don't want Magic Notion to get typecast as 'the Kitty Powers people'. We have other ideas that are not drag queen related!

But it all depends what the audience wants at the end of the day. We are always listening to our community of players and we aim to please them first and foremost.