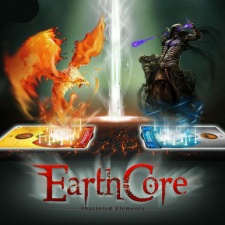 From its hardcore origins as the driver of massive amounts of monetisation in Japan, the card-collection game (aka CCG or card-battler) has spread slowly westwards.

And along the way, it's changed.

So while games such as Rage of Bahamut attracted niche audiences, designers are now looking to create CCG-hybrids to widen their player base.

This attempt can be seen in games ranging from WWE Superstar and League of War to its purest western incarnation Hearthstone.

For Polish developer Tequila Games, this blossoming encourages its view that the western audience is now open for a mass-market skill-based CCG.

Core but less so

That said, it's been working on Earthcore: Shattered Elements for over 18 months now, marking out the project as being both ambitious and a passion.

"Yes, we think the market is bigger because of Hearthstone, says Tequila's CEO Lukasz Deszczulka.

He's also keen to explain why the game is different from Blizzard's behemoth.

"There's no winning deck in Earthcore," he says. "It's a skill-based game, with a new risk-reward strategy (see video), which turns players into designers.

"We have a crafting mechanic in which you can fuse any cards together that creates 500,000 possibilities and this enables players to plan their strategies in a transparent manner."

Deszczulka also hopes the game's extensive story-driven PVE elements will attract a broader audience, albeit one that's more midcore than the players which have been attracted to, say, Kabam's Hunger Games: Panem Rising - a movie tie-in that's a reskinning of its 2013 Heroes of Camelot release.

"Earthcore is a skill-based game. It's not about the random evolution of your cards or just tapping on the screen," Deszczulka says, somewhat dismissively when a comparison is made between the two.

Of course, for committed players, the real success of their deck - and the game itself in terms of longterm monetisation - will only be found in its PVP arenas.

This is something Tequila hopes to nurture with a chess-style ELO ranking system.

It's also been working with local boardgame designers to ensure the whole experience provides a rock-solid experience: something that has lead to the redesign of some mechanics and partly contributed to that 18 month development time.

Still, that process isn't over yet. The game is about to start its soft launch on iOS, with the hope that a wider launch will happen in early 2015.

Why Tequila Games developed Earthcore; the game that wanted to be a CCG