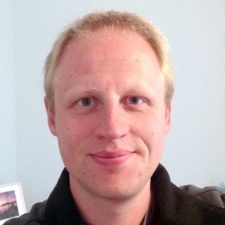 Jon Ingold is a writer and designer, and the co-founder of inkle, a software and design company that focuses on interactive storytelling. Their most recent story-game, 80 Days, received a 9/10 from Edge and a Metacritic score of 89%.

Before founding inkle, Ingold was a lead designer for Sony Computer Entertainment Europe, and an independent creator of parser-based interactive fiction games. He has spoken at GDC China, GDC Europe, PAX East and the London Book Fair.

Jon Ingold: As a teenager, my two favourite games were both British - Lemmings and Tomb Raider - and I think I grew up with the sense that if one wanted to make computer games, then the UK was a great place to do it.

The other major impact on inkle, of course, has been the Fighting Fantasy gamebooks created by Ian Livingstone and Steve Jackson - classics of British gaming, and we're currently halfway through our reimaging of the Sorcery! series of books.

As a premium game developer, user acquisition is perhaps even more important to us - if we don't acquire users, or if users are costly to acquire, we don't earn anything.

But that's really the issue of discoverability, and there's only one solution that really works in mobile, just as in all other creative media, and that's to make stand-out experiences that are original, unique and excellent fun.

Our biggest challenges are localisation - which for text-heavy narrative games, is essentially an impossible problem - and market reach.

We've found getting noticed even in the US is difficult.

The most important thing for mobile indies is to stay focused.

The most important thing for mobile indies is to stay focused. Projects have got to push the boundaries to get noticed, but they can't afford to be bloated, overly complex, or too experimental.

It's far better to make several small successful games than a single, all-in project in the mobile space.

VR is likely to create new market pockets than change mobile per se - games for VR won't resemble games for mobile, and they're likely to be made by different studios (or at least, different teams within those studios). And the existence of those games won't slow the mobile market particularly.

Wearables are more interesting: if they take off, they might cause a further simplification in how casual games are played to fit them onto small screens with one-touch mechanics.

We were there last year, when 80 Days was in development, and we described it to a few journalists and other developers who looked a bit puzzled and bemused by the concept.

We're looking forward to going back and telling those same people about the same game, but as a successful release!

A reduction in the free-to-play market, as developers making smaller titles start to realise they're not earning out, while players begin to tire of the instant hit of free titles.

The premium game space is growing, slowly but surely, and I think that trend will continue.