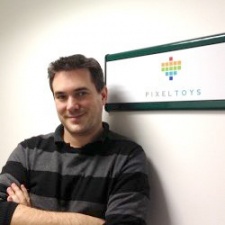 Before co-founding Pixel Toys, he'd already notched up credits on more than 30 games, and most recently released the zombie splattering GunFinger for mobile and tablet which received over a million downloads in its first month.

Andy started at life Codemasters and held Chief Game Designer and Global Brand Manager positions there, he also did some time at Activision, as FreeStyle Games as Head of Digital Platforms before leaving to co-found Pixel Toys in 2012.

Pocket Gamer: We’re showcasing the Best of British at Pocket Gamer Connects so how much of an impact have British game developers had in your gaming life?

Andy Wafer: It was during my teens in the early 1990s that I decided that making games was what I wanted to do. Sure, I’d loved games my entire life, but it was at this time I released I would dedicate my life to making them, and it was the games I was playing at that time which made up my mind.

I was playing the same games everyone my age was playing, Elite, Micro Machines, Lemmings, Worms, GTA, Tomb Raider, Sensible Soccer, UFO: Enemy Unknown, Speedball (the list goes on, you get the idea).

Make something that’s different, interesting to a specific group of people and of high quality.

It wasn’t until years later I understood they were ALL British. I think it’s safe to say British game developers have had a pretty big impact on my entire life. Long may that continue!

User acquisition is a challenge simply because there are so many developers out there publishing content. The barriers to doing so are low, much lower than in the console-dominated era, anyone can make and publish a game now.

It’s a great thing in so many respects, but it does make it a lot harder to get heard amongst so many other titles.

Unless you’ve got deep pockets to splash on advertising, which sadly most of us don’t, the best thing I’d recommend is to make a great product. Make something that’s different, interesting to a specific group of people and of high quality.

It sounds obvious but so many times I see people complaining about their game not getting downloads, and often (but of course not always) is because what they have made just isn’t good or unique enough to break out.

Getting your game localised and technically adapted for international release can be a mammoth task, but it’s very important if you want to have global success.

Our last title GunFinger, an action shooter with very little story, has around 10,000 words to translate. It’s often also important to make content changes beyond just translation, and for Asia there are also local payment systems and social networks to consider.

Fortunately the economy isn’t just mobile, so indie developers having success on Steam, console and other platforms don’t need to adapt to mobile to survive.

But it’s clear that mobile is a big opportunity and growing. If you want to be successful you have to understand who you’re making your games for and the appropriate way to monetise your game effectively for that audience.

Eventually I’ve no doubt wearable tech will have a big impact on how we play games, and many other aspects of our lives, but I think it might take a lot longer than some expect.

There’s already a market for games which interact with wearable technology, especially those based around fitness. And VR is also going to have some pretty cool games out soon, there’s a lot of nice projects in development right now.

But both are all still quite niche. I think it’s going to take a piece of wearable tech which is truly mainstream to actually change the landscape, and I’m not sure I’ve seen that yet.

Meeting new people in the industry and catching up and spending time with old friends.

I’m sure they’ll be some valuable insight from the sessions as well, which makes the whole thing something to look forward too.

What’s your prediction for the mobile gaming industry in 2015?

Next year is supposed to be the year mobile gets bigger than console. That’s not really a prediction, rather a known fact.

So here’s a crazy one for you, how about a screen that goes all the way around your phone?