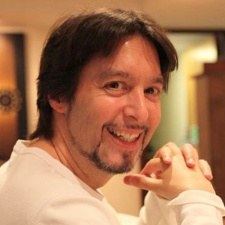 Pocket Gamer: What was the most significant mobile games news in 2014?

Ashley Routledge: The hype, build up, news coverage and live updates surrounding the launch of the iPhone 6 Plus. For someone who lives and breathes iPhone games and apps, this was a huge deal this year and something I've been wishing for, for ages!

I still haven't got over how amazing it is to play games on the big screen. I decided beforehand that I was going to go all in on the Plus and live with any down-sides (like the extra size and weight) for this generation's entire lifecycle and so far I'm loving it.

The end of 2013 and the start of 2014 was a shift for us as we took time out to develop King of the Course for Electronic Arts. This meant some of our new ideas were put on hold while we focused on developing the PGA Tour game.

We've had a super busy year, with Flick Soccer Brazil doing really well during the World Cup, and updates to our classic games like Flick Golf and the original Flick Soccer. We also launched three American Football games; NFL Kicker 15, NFL Quarterback 15 and our own original IP, All Star Quarterback!

News-wise, we were really proud of NFL Quarterback 15 getting to #1 in the App Store paid chart in the UK earlier in December.

Wow! That's a tough question. I'm addicted to the App Store and play so many games. I love Thursday's What's New round-ups and the surprises that appear when the App Store features update.

Crazy Taxi keeps the quirky characters and humour, making what I think is a perfect mobile version of the original hit game.

NBA 2K15 was a real visual showpiece and had the best 3D crowds I've seen on mobile so far. We've been in that difficult era (like the PS1 to PS2 days) where 'cross trees' and cardboard cut-out crowds have been possible for some time, but making the switch to high detail trees and models has been too much of a jump (in processing overhead terms), though we're starting to get past that.

NBA is one of the first to make the leap to full 3D crowds. Hats off to the team who took the plunge.

I'm addicted to match-3 games too, with Disney's Frozen Free Fall and Candy Crush Soda Saga being my current favourites.

Earlier this year Sky Force 2014 was a game I played a lot. I never played the original, but the new mobile version is extremely well made and looks gorgeous. Also Record Run by Harmonix, which didn't have the success it deserved. I had a lot of fun running to tracks with varying beat speed - from fast Prodigy tracks right down to Teach Me How to Dougie.

On iPad, I got into Fates Forever and Hearthstone for a while, which are both really classy games with a lovely polished look and feel.

My overall favourite is between Crazy Taxi: City Rush and Frozen Free Fall (I'm a big Frozen fan), but I think Crazy Taxi just wins for taking the original game's style, keeping the quirky characters and humour and making what I think is a perfect mobile version of the original hit game.

America continues to be the largest market for us, and our arcade-action games are a great fit for the US, Canada and Europe.

We're a small company and haven't really localised in a big way, so there are some opportunities for us to expand. I would love to launch some fully localised games into Japan, South Korea and China.

Some are going to feel the squeeze as pressure from investors mounts for the many companies trying to become the next Supercell or King. The mobile market yields gigantic rewards for the few at the top, but if you miss (even by a little) it's a harsh reality!

Development-wise, budgets will increase as the devices continue to get better and better and there may be a small shift towards 3D if it's presented in a casual way - like FarmVille 2 and Star Wars Commander - both of which did a brilliant job of presenting awesome 3D worlds in a very accessible way.

I don't really do resolutions anymore! I've given up smoking and the other vices are all too good! That said, I'd love to have a top 10 grossing game in 2015.

For the industry, I'd love for everyone to stop fighting so much and just get along: publishers, developers, hardcore gamers and casual players. Really, I want to stop time, because these last few years have been like going back to the 1980s when games were made by a couple of guys and only took a few months. Less risk, more originality. Lots of fun!

Thanks to Ashley for his time