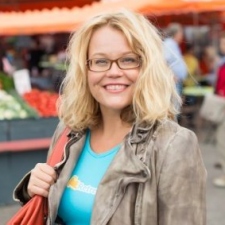 Yoga Retreat is a new social game from Helsinki-based Gajatri Studios that set off at a sprint when the Android version launched recently, and grabbed an impressive 75,000 downloads within a week.

The game is pegged as one of the few - if not the first - yoga-themed simulation games, and is the flagship product of company founder and CEO Tiina Zilliacus.

Gajatri Studios was born from a philosophy that aims to not only bring fitness into mobile gaming, but well-being.

What's the difference between fitness and well-being? Well, much like yoga cultivates mental and spiritual health, as well as physical fitness, Yoga Retreat works to give its players a more engaging and personal experience. That's the wellness aspect blended into the design.

But it has to remain just as much fun as any lifestyle simulation game, and this is its fitness equivalent. These two aspects aren't easily compatible, but reactions to the game on iOS and Android suggest that Zilliacus and Gajatri have uncovered the successful recipe for medatitive gaming.

Plans don't stop there for Yoga Retreat, however. Speaking to Tiina, we discovered her bold aspirations to integrate the player's fitness level into the gameplay, just as it already has with their mental health.

"Yoga Retreat will have a mini-app called Heart & Breath, where players can complete daily breathing practice together with the game," she explains.

"The first task will be to connect the game with a heart rate monitoring wearable or belt. Every day a new challenge will open and they will teach you how to breath better and calm down in a playful way."

Concerns over the connection between video games and health (or a lack of health, moreover) have been around as long as the industry, and Gajatri's approach is a unique and very interesting one. While addressing one concern, it also embraces a solid business model intended to keep players engaged on a daily basis.

The popularity and excitement that's been building around smartwatches has spilled over to give more fitness focused wearables - the fitness bands, as we like to call them - a shot in the arm. Yoga Retreat will evolve to make use of these Bluetooth-connected monitors, but will it also embrace smartwatches once they reach a wider audience?

"Smartwatches are a very interesting opportunity for us in 2015," Tiina continues.

"Most likely we'll not be porting, but utilising some device features in ways yet to be innovated within the game. But as Heart & Breath illustrates, we're very serious, or as serious you can be about playful and healthy features, and how to use mobile software platforms capabilities in innovative ways in our games and apps."

Harnessing such new hardware features is the key to proper user engagement, and Gajatri has carved itself a unique niche that brings wearable tech into play without it feeling superficial or forced. Is that the way forward with wearable tech gaming?

"Obviously if I didn't strongly believe so, we wouldn't bring these types of features and mini-apps to the market," she laughs. "The best strategy in my opinion is not to be a copycat, but to make the use case really integrated to the game theme - and story - so that it doesn't feel artificial."

It's not unreasonable to predict that the addition of Health & Breath to Yoga Retreat will remake the game for a whole new audience, and potentially recruit a lot of non-gaming fitness app users into the smartphone gaming fold.

What else does the future hold for Tiina and team?

"Our current focus is fully on Yoga Retreat and the above, but yes, personally I am dreaming of a bigger team and completely new IP for next year," Tiina concludes. "We also very much hope that all Pocket Gamer readers will start to breathe and play with our challenges in January!"

Everyone intends to get fit in the New Year anyway, right? Might as well make it fun, too.