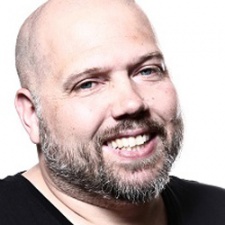 Jason Garber is a big ol' Canadian by birth, and was raised in The Netherlands. He's a strategic game fanatic and charismatic entrepreneur. Originally having studied Theatre Science at the University of Amsterdam, he chose instead a career in videogame development, and started out by shocking the globe with his outrageous game Hoolligans, back in 2001.

Age 28, he had a company with 50 employees in Amsterdam, but subsequently decided to broaden his work experience - which led to him joining Stainless Games for the first time a decade ago, followed by jobs in Belgium and Germany, then crossing oceans to set up studios throughout Asia (Singapore, Shanghai, Seoul).

With 20 years of experience, he founded a mobile-based game studio in Berlin, Eelusion, but the opportunity to re-join Stainless Games proved too enticing to turn down.

Jason Garber: Immensely. My career would not exist without it.

The Curve from Nicholas Lovell gives a good example of how to do this, but it all comes down to a good game and conquering the game slot of our customer with your game.

What are the major challenges in terms of global publishing?

Polarisation of the market by developers and publishers alike.

Getting the attention of the customer becomes more and more hard and convincing them to part of their money and rewarding thus the experience you give them.

Understand the market and make sure your finances are in impeccable order.

Understanding the market and making sure your finances are in impeccable order.

Do not blindly develop and have no understanding of the situation after development.

If it does, it is just another thing to adapt to as developer.

Whatever the customer use/want, we should supply. It is just another platform in my opinion.

But if done right also more rewarding than ever before.