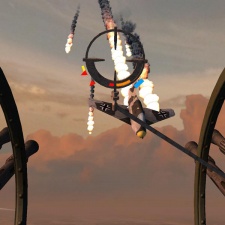 Climax Studios is well ingrained in the game development space, having worked on franchises ranging from Castlevania to Silent Hill and, most recently, Assassin’s Creed.

It’s also bridged the platform barrier with apparent ease, which is perhaps why it feels equipped and ready to join the frontline offensive into virtual reality gaming.

Climax has Bandit Six, its first VR game, ready for release, and will begin with Samsung’s recently released Gear VR as its launch system.

We caught up with the game’s associate producer Maria Novisova to find out about the studio’s experiments in VR gaming.

“VR is technically challenging in general and it requires an entirely new approach to creating a gaming experience,” Novisova says, explaining the early challenges her team faced when branching out into their first virtual reality project.

“The conventional way of creating games doesn’t apply to VR.”

Close to being available on the Oculus-supported Gear VR, Bandit Six, puts players in the gun turret of a Lancaster bomber and sends them into battle in the skies of World War II.

It’s not a new gaming concept, so it seems reasonable to think that creating a new addition to this well-trodden concept would be a simple task for an established code factory like Climax.

But apparently it didn’t turn out that way at all.

You need to forget everything you know about conventional games development and start from scratch.

“VR projects require you to be innovative and approach things in a different way,” Novisova continues.

“You need to forget everything you know about conventional games development and start from scratch, which makes VR projects immensely exciting but incredibly challenging at the same time.”

It’s a small irony that VR game developers are facing a similar issue as new gamers; one of control.

While any form of standardised control system has yet to reveal itself for early hardware adopters, those making games are also having to find new ways to deliver an experience, while relinquishing design choices that usually help them to build the game’s entire framework.

“VR pretty much turns your game dev knowledge upside down. There is virtually no control over the cameras in game, because the player is the camera,” explains Novisova.

This sparks a memory of an early Jackie Chan interview as his worldwide popularity began to emerge. He spoke of problems working with American stuntmen, who’d just stand around in the background waiting for their turn to get hit. His Chinese stuntmen remained animated and active between punches and kicks, giving a dynamism to the fight scenes that made him a household name.

Is this a skill VR developers are going to have to learn, in the same way that Hollywood fight choreographers once did?

“It does post some interesting performance questions,” agrees Novisova.

We had to find answers to all kind of questions that we hadn’t come across in conventional games development.

“For example, what happens to an enemy plane once it goes over your head? It can’t just de-spawn and disappear off the screen. We had to find answers to all kind of questions that we hadn’t come across in conventional games development.”

So with one virtual reality game in the bag, does Climax think the VR market has more potential?

“We have a bunch of interesting ideas that are being discussed at the moment and a new game in development.

"There’s a huge variety of possibilities in VR development, not necessarily limited to games.”

Bandit Six is prepped for launch, and given that Novisova took the helm not only on a brand new game, but also a new direction for the studio, did she enjoy the challenge of blasing VR trail?

“Honestly, it makes me really happy to think that we took a very simple idea, combined it with by no means the most powerful platform in the world, and ended up with something that’s really fun to play," she ends.

"At some point Bandit Six took on a life of its own and became more than a sum of its parts.

"It’s also a project that I got to oversee completely from scratch. The idea was conceived internally, the development took place in the studio with a small team of people and this is something we can really call our own.”