Are Mack Growen on building something new 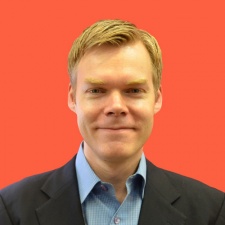 Off the back of the success of its RPG Brave Frontier and a late 2014 Tokyo IPO, Japanese mobile developer Gumi Inc. can boast plenty of F2P experience and plenty of money too.

Taking these components and finding more success and more money isn't an easy task, however.

There are plenty of companies in Japan, China and Korea - Marvelous, NetEase, Netmarble etc - who are in the same position.

In particular, the strategy of taking the games that made them successful in Asia into western markets doesn't seem to be scaling.

That's why these companies are looking to crack the west with a different approach: going local.

Netmarble has just invested $130 million into US publisher SGN, while NetEase announced an indie developer fund. Marvelous has had a European publishing operation for a number of years.

Never afraid of a big commitment, however, Gumi has decided to set up its own firstparty studio from scratch.

"I'm surprised Brave Frontier does so well in Europe," says Are Mack Growen, Gumi's VP and Head of Europe.

"Players do like it but obviously there's a magnitude difference in terms of the overall numbers compared to Japan."

We need more risk... We want to build a brand that stands for something.

That game is operated out of Gumi's Paris office, and the company also has a studio in Stockholm that's made up of the remnants of DeNA's Scattered Entertainment team.

But Growen job is to set up Gumi's European HQ in Berlin, which alongside localisation, UA, community support and back office functions, will be its first European development studio.

He argues that while some games - Clash of Clans, Candy Crush Saga - have been successful globally, it's very difficult to actively develop such a game. What makes more sense is to make a game successful in its local market, and then see how it scales internationally.

"Certainly we'll use our experience from Japan, but we won't compromise our design decisions so our games appeal in Japan," he states, of the philosophy for the Berlin team.

"If we have a hit in Europe, maybe then the game can be localised, but we're here to crack the west and we're taking a long term view," he says.

Growen says Gumi's approach - which will be focused in the competitive mobile strategy genre - is going to be thoughtful and even experimental. It won't be releasing a rethemed version of something that's already been a hit, for example.

"We need more risk than that," he says. "We want to build a brand that stands for something."

Hence, he expects the development team to undertake a long concept and prototyping phase.

"We're searching for something new," he points out.

In keeping with this, the team is going to be filled by what Growen labels "fewer, more experienced" staff.

"We'll invest in strong product management so we have less scrambling around and crunch. It's going to be like a mature startup. Experienced and nimble," he predicts.

WIn Japan, they treat the game as an engine or platform in which you run events.

In this way, he hopes the team can stay around 10 people during early development, perhaps increasing to 15 at launch.

Best of the east

Perhaps the most radical structuring, however, will be the way Gumi Berlin approaches the free-to-play part of game development.

"In Japan, they treat the game as an engine or platform in which you run events," Growen ponders.

"You don't think about the game that's abstracted from live events. In this way, we're looking to embed designers and producers together so there's no divide between fun and free-to-play mechanics."

It's a trend that been mentioned recently by the likes of N3TWORK's Neil Young and Marvelous' Harry Holmwood, both of whom also have experience of how to be successful in the Japanese mobile games market.

Of course, the difficult balancing act will be to pick the aspects that are universal, while ignoring the elements that are specific to Japanese culture, replacing them with their western equivalents.

Add to the mix, the genre freshness that Growen and his team will be looking for, and they certainly won't be lacking when it comes to ambitious goals to aim for.