Zynga's Henry LaBounta on the importance of 'learning to see'

Catching up with a Chief Visual Officer 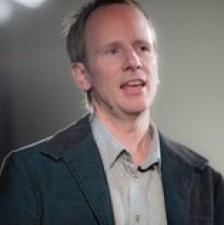 Zynga's chief visual officer, Henry LaBounta, is a man whose experience is by no means limited to mobile games.

From animated films with Dreamworks to triple-A console games with EA and Microsoft Studios, LaBounta has credits strewn across all kinds of visual media.

However, LaBounta's talk at India's NASSCOM Game Developer Conference was less concerned with the technical lessons learnt in a 27-year career, but more the visual intuition that he has developed and honed over that period.

“I've worked with a lot of game teams while at EA and Microsoft, and now at Zynga, where at the eleventh hour I was asked to come in and help them make the game look better,” he explains when we catch up following his speech.

“In doing that, I found a lot of common things that seem to be wrong in a lot of games. And, learning those things, I thought it would be a good idea to talk about it at a higher level across the games industry.”

Entitled 'Learning to See', LaBounta's talk hammered home the fact that there is no such thing as objectivity when it comes to visuals and the way they are interpreted.

“I've done a test where I've given the same image to a dozen different art directors, and there is almost no overlap between what they tell me,” he recalls.

“Learning to see is all about whether you can exercise your eyes almost as you'd exercise your muscles... there are things that I wouldn't even see before someone educated me to look for them, and I apply that to games now.”

For someone working in the visual department at a games studio - particularly specialising in free-to-play - one may assume that such ambiguity is an undesirable blight on the game's clarity. On the contrary, LaBounta feels it is to be celebrated.

“I think [that ambiguity] is wonderful, and it's what keeps me interested,” he says.

“When I do this test, quite often people point things out that I didn't see right away. But there are times when I show some screenshots to people and they say 'that looks good', while I'm thinking it looks crap.”

So, what are the reasons for such a dramatic disparity in taste and interpretation, even among art and design professionals? For LaBounta, it seems that being too close to a project can result in a skewed and overly sympathetic view of the work at hand.

“An art director recently said to me recently: 'we want feedback on the game, but you guys don't know all the different directions we've gotten, the original mission we had, and the changes that have occurred,'” he recounts.

“But that's a great thing. I don't want to know any of that. Our consumers come to the game without any knowledge of the game's history, and they really don't care.”

“So I think it's important that game teams that have for a long time been heads down, focused on what they're doing, to get an objective view. Fresh eyes are super important.”

This, of course, is a privilege of working at a large company like Zynga. Indeed, LaBounta's CVO role affords him the detachment of not being an art director on any specific project, making his a more objective voice.

However, the reality is that many developers - especially indies, the bulk of LaBounta's NGDC audience - are not afforded that same distance. As such, it is these in particular that he targets with his advice.

Your first emotional impression of a game is based on what it looks like.

“I believe your first emotional impression of a game is based on what it looks like, so it's super important that you have that initial appeal,” he says.

“I'm hoping that through my talk, people - especially young students - can discover exercises and practises they can do to develop a more critical ability to elevate the state of game visuals.”

The most straightforward and accessible of said exercises involves viewing a screenshot in black and white, the theory being that if it's smudgy and ill-defined without colour, the luminance and contrast of the scene isn't right.

Throughout the interview, it seems that NaturalMotion - the Oxford-headquartered British firm acquired by Zynga in 2014 - is where LaBounta really expects the firm's next wave of successes to come from.

And indeed, with CSR Racing 2 and Dawn of Titans - both currently in soft launch - boasting almost console-grade visuals, his enthusiasm for them from a graphical perspective is understandable.

We posit that mobile gaming is perhaps the biggest departure of LaBounta's career so far, with triple-A games more comparable to movies, and he agrees. However, he feels that the lines are blurring more than ever.

“The power of mobile devices advances much faster than consoles really, and it's just a matter of time before we're seeing cinematic experiences,” he considers.

And indeed, while Zynga initially “kept the two studios fairly separate,” it seems that NaturalMotion is now very much part of the wider Zynga family, and under LaBounta's jurisdiction when it comes to visuals.

“My colleague [at NaturalMotion] is the studio art director. We talk regularly, I send critique and feedback to the teams, I help him staff the game by doing a little bit of recruitment... we're trying to be more collaborative,” he explains.

“I also do some creative collaboration,” he goes on. “Having worked on a couple racing games myself [e.g. Burnout Paradise and Need for Speed: Hot Pursuit], the CSR 2 team is a natural one for me to consult with.”

However, despite this focus on graphical fidelity and console parity that so evidently excites LaBounta, there are of course aspects of free-to-play game development that are unique to the territory.

“I think I do my best work when I'm challenged, and taking on something new like this is a really interesting challenge,” he says.

“More so than console games, more so than anything I've done before, experience design - UI, UX - is so key to all of our games. I've always emphasised how important it is for visuals to support gameplay, and that certainly applies to experience design, too.”

I got to know some of the talent in Bangalore, and it's a really strong studio.

LaBounta also tells us that one of his objectives while in India was to visit Zynga's Bangalore studio for the first time, which comprises 150-200 people.

“I spent a few days with them, I did a bunch of presentations and we did a little interactive workshop that was great fun. I think the artists were energised, and seemed very appreciative of that,” he explains.

“They put together a show of personal art, too, and it was fantastic. I got to know some of the talent on the team, and it's a really strong studio.”

However, what appears to have struck LaBounta most is that the Bangalore studio is responsible for running the original Farmville seven years on, as well as Mafia Wars - staying power he describes as “just incredible.”

“What other media, what other products, are part of people's day-to-day lives that long?” he questions.

“People coming back, playing our games every day for seven years - that's amazing, and there's something there that's really magical.”