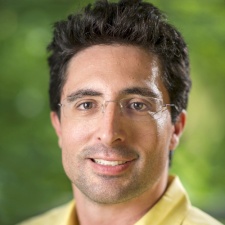 Niccolo de Masi is CEO of Glu Mobile, which during 2015 released games including Sniper X with Jason Statham (winner of best voice acting of the year) and James Bond: World of Espionage.

Nicollo de Masi: Activision’s acquisition of King Digital, while later in 2015, was certainly big news and in my opinion, an indicator of things to come.

The mobile gaming industry is in a state of dynamic maturation that will likely continue to see increased consolidation. It’s undoubtedly a crowded market that will prove more and more difficult to achieve success in.

It’s no longer enough to have a fun game: companies need advanced distribution, monetization, and marketing solutions to put out hits.

We believe that Glu has become the industry leader in Hollywood IP.

In 2015, we identified that industry-wide film IP often does not reach the level of success as that of well-known celebrities. As such, we’ve re-focused on people. Meaning that we recognize that players identify with individuals on a deeper level and are more likely to engage in the universe we create for them.

We look forward to the launch of our titles for Katy Perry, Kendall and Kylie Jenner, Britney Spears and Nicki Minaj in 2016.

Forcing private companies to value themselves in line with public companies.