2015 in Review: Mediatonic's Sam Barton-Nicol on not being apologetic about mobile gaming 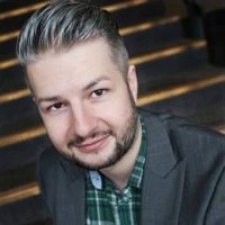 Sam Barton-Nicol: While Activision Blizzard’s acquisition of King and the launch of Amazon Underground and were definitely important moments, for me the most significant news was the announcement of the partnership between Nintendo and DeNA.

While the fruits of this union have yet to be seen, it is incredibly encouraging to see a juggernaut of the traditional gaming industry recognising the value and experience of a business that has proven its success during the growth of the mobile space.

We've seen our business change significantly over the past year, primarily due to the success of Heavenstrike Rivals in both Japan and the rest of the world, which has redefined the quality bar we are now aiming for and hitting as a studio.

With the expectations of mobile gamers rising at an incredible rate, we've embarked upon the production of a number of large-scale titles with partners in both Asia and the West to step-up what we can achieve creatively in terms of both scale and scope.

The resolution I’d enforce on the industry is to stop being apologetic about mobile gaming’s place within the wider gaming world.

We think that people are going to be surprised by what we have coming over the next year!

With discoverability issues on the mobile platforms expected to continue into 2016, I expect the popularity and success of games based on popular, mainstream brands and IPs will continue throughout the year.

Based on the success of Fallout Shelter, I also predict we’ll see an increase in the number of games from console and PC developers.

I anticipate these will come with the big budgets, vast marketing spends and respected gaming brands we’re used to from these traditional platforms.

Without a doubt, COLOPL’s Rune Story. It hasn’t received a lot of attention here in the West (although it is a top grossing game in Japan), but for me it’s a window into where popular mobile gaming could end up next year.

It’s a compelling action RPG that, unlike a lot of similar games, is displayed in portrait mode, which makes it perfect for playing while on a busy commute.

It has also completely dispensed with the energy mechanic and is very generous with hard currency, which has convinced me it’s worth monetising on!

My personal resolution is to be more adventurous in exploring the potential ways we can engage with players and make our games their beloved hobbies.

As the industry matures we’re starting to see more and more niches appear, each with an audience that has increasingly specialist requirements.

The resolution I’d enforce on the industry is to stop being apologetic about mobile gaming’s place within the wider gaming world.

Not every mobile game can offer the traditional core gaming audience what they want, but there are now millions and millions of new and happy gamers thanks to the industry.

It’s a year to talk proudly of what we’ve achieved!