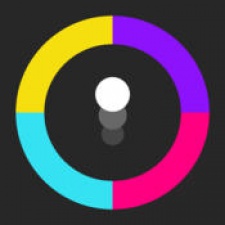 Buildbox, an accessible drag-and-drop game engine that requires no knowledge of coding, has spawned its first App Store-topping success in the form of Color Switch.

California-based developer David Reichelt conceptualised the reflex-testing arcade game in only 30 minutes, going on to build the finished product in just one week using BuildBox without writing a single line of code.

Color Switch, published by Fortafy, quickly went on to claim the number 1 spot on the App Store's top free charts in over 100 different countires including the US, UK, Canada and Australia.

But what makes the development experience with Buildbox so uniquely accessible, and what sets it apart from exisiting engines such as Unity?

"Inside [Buildbox] you won't find options for coding or scripting, and the vast majority of our customers do not have programming experience," explains Buildbox founder Trey Smith.

"Our goal from the beginning was to create a new market sector we call codeless development.

"This has empowered thousands of people who want to make games, but did not have the technical ability to do so."

Color Switch developer David Reichelt certainly fits into this camp, whose only experience with any kind of game development had been using GameSalad - an engine with similar intentions to democratise and simplify development.

With Buildbox, most of the frustration is gone.

"The bottleneck of all other software that I’ve seen is that you are still coding to some degree which takes time to learn; even when I got decent at using the other software, game development would still take a long time and was very frustrating," says Reichelt.

"[Using Buildbox] was like going from 0 to 60 in that now when I had an idea in my head I could see it realised within minutes instead of hours, weeks, or months; there is no more long development time and most of the frustration is gone."

This sheer speed of development is a vitally important part of Smith's strategy for BuildBox, and Color Switch is not simply an anomaly - it's part of an emerging pattern.

Another Buildbox-developed game, Phases, was created in only two weeks and made the App Store free chart's top 25.

"It appears this is the fastest development solution on the market," says Smith.

31 games made in Buildbox have hit the top 100, and 28 have received an Apple feature in just over a year - more than those made in all comparable game builders combined.

"Many of these games broke the top 10, but Color Switch has been a complete global phenomenon," Smith continues.

Color Switch has been a complete global phenomenon.

"It's very rare to see a game stick that long in the top spot and we're extremely happy for David."

Game dev for the masses

Reichelt is similarly full of praise for Smith and the Buildbox software that allowed him to create such a hit.

"What Trey has done with Buildbox reminds me of what Steve Jobs did with personal computers," he enthuses.

"He saw what everyone else was doing by catering to companies with giant, complex, impersonal computers, and he made them personal and for the masses."

It's worth noting however that, following a partnership between Fortafy and Eyebox Games, the latest update of Color Switch has been ported from Buildbox to native code to allow the addition of custom features.

Smith is keen to point out that every one of these custom features will be available in Buildbox 2.0, which is due to be released in Q1 2016.

Reichelt, meanwhile, plans to double down on his commitment to the software by "putting my own Buildbox team of programmers together in future" - but right now his focus remains with Color Switch.

"I have plans for many more games but I won’t have time to start developing those until later this year."

You can download Color Switch on the App Store and Google Play.