CEO Nicolas Godement-Berline on the soapbox 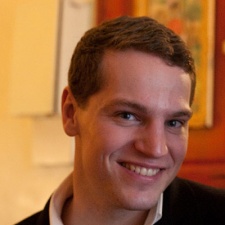 PocketGamer.biz: How different an experience is being co-founder and COO of Mana Cube compared to being a smaller cog in a larger machine at Gumi?

Nicolas Godement-Berline: At first, setting up Gumi Europe in Paris was very much a startup experience.

It began with just six of us in an underground basement! With Mana Cube the differences really started kicking in a bit later than that.

We've maintained a core team and published a full-scale F2P game with Dungeon Monsters, so building the tools and process to fully operate a game as a service with very few people has been critical for us.

We've got amazing things in place to create and push new content, review the game balance, run customer service, release new events and characters on a weekly basis, and so on.

Our team has had to be incredibly smart about how we do things at Mana Cube.

Our team has had to be incredibly smart about how we do things at Mana Cube - staying lean and having the ability to act fast tend to be the privileges of smaller structures.

I do miss Japan and all my former colleagues at Gumi, though!

You recently launched your debut game, Dungeon Monsters. What has been the response from players so far?

Dungeon Monsters launched in March this year, and the response has been amazing. We're extremely happy, especially considering it was a bootstrapped, self-funded project.

The appeal of an old-school first person dungeon crawler really resonated with a lot of people who are now playing the game on a daily basis.

This is all combined with a strong card-battle framework, weekly events and a PvP mode that we released a few weeks ago.

Monetisation is pretty strong with net ARPDAU in the $0.2-0.3 region, and peaks up to nearly $1.

The game remains somewhat of a niche, though, and we certainly feel pressure from a lot of the bigger RPGs out there in terms of user acquisition and player retention.

With Dungeon Monsters inspired by classic RPGs, do you feel that there's a healthy appetite for neglected genres and gameplay styles in the F2P space?

Yes, absolutely. It's all about properly conveying the emotions a player might feel when playing some of these classics.

Those games don't tend to have the strong social and retention hooks required to scale a F2P game, so you really want to nail down the tone and the core emotional triggers.

Keep those and build a F2P game around them.

As your session concerns customer service, just how important do you consider it to be? Do developers spend enough time on it?

It's not just about answering tickets, it's about making someone's day through amazing service.

We think it's extremely important. As game developers, we make the most engaging entertainment products in the world, yet we seem to pay very little attention to our customers.

If you are going to spend three to 25 dollars to acquire each new player, our mission is to prove that investing a few more cents into reaching out to this player is definitely worth it in the long-term.

It's not just about answering tickets, it's about making someone's day through amazing service and proactively engaging in conversations with our players.

A few years from now, I'd love to do things such as sending thank you cards or having a call centre. Some of the successful companies in Asia are already way past this point.

What are you looking forward to seeing at PG Connects Helsinki 2016?

Finland! Finland is the epicentre of F2P mobile game development right now, so I really look forward to getting a feel for the industry there and the level of maturity of the companies.