Producer Gavin Lammin reflects on the game's life so far 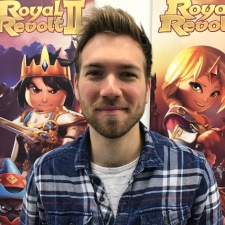 For this entry, we chat to Royal Revolt 2 and Flaregames Producer Gavin Lammin about the 2014 strategy sequel more than two and a half years after its launch.

With Royal Revolt 2 a few months off its third birthday, how do you reflect on its performance - from launch to the mature title it is now?

It’s been incredible how the game has evolved and developed such an active and passionate community.

After all, not many mobile games have such a long lifespan in terms of live ops and even now we’re planning content updates for the foreseeable future.

It’s naturally a very important title for Flaregames, and alongside more recent releases like Nonstop Knight and Olympus Rising, it’s been a real driving force for the company.

It’s also fantastic to work with the team at Keen Flare in Frankfurt, a truly world-class group of developers.

How big is the team currently handling live ops on Royal Revolt 2?

It’s a split between our team here at Flaregames and the developers at Keen Flare, but in total it's around 40 people.

Royal Revolt 2 is a very important title for Flaregames, and it’s been a real driving force.

Due to how Flaregames is structured, those on live ops are typically not 100% allocated to a single project, but instead bring their expertise when an issue that requires their attention arises.

Naturally the team at Keen Flare are delivering the client and server updates and we work closely together particularly when key milestones approach.

While we work with a traditional update roadmap, we have - on many occasions - altered those plans after receiving particularly valuable community feedback.

That’s why building player trust and creating a dialogue with our players is vitally important to us, especially given the age of the game.

With such a mature player base, the bonds formed in-game are what keep many players coming back.

If we dropped the ball when it comes to community management, it would have a severe impact on the game as a whole.

Our customer support, community management and social media teams work as one to continually engage with the community, extracting valuable feedback, filtering relevant comments so they can be reviewed for our roadmap, and of course immediate escalation of critical issues.

When you have a game that is beloved and cared for by so many within the community, accurate and timely responses to questions is crucial.

Since the game's launch, Flaregames has transitioned from internal development to a publishing focus. As a Flare-developed game, how is Royal Revolt 2 handled differently to the rest of your portfolio?

In principle, Royal Revolt 2 is not handled any differently from other games in our portfolio. From a publishing perspective, we treat Keen Flare the same way as any of our external studios.

We treat Keen Flare the same way as any of our external studios.

But it’s important to note that we are not the developer - it’s our role as Flaregames to empower the development team to make the right decisions and provide our support and expertise to enhance the game’s success.

What steps have you taken to ensure that Royal Revolt 2 maintains a sizeable and active player base years after its launch?

Delivering new and exciting content, for one. We work on a cadence of at least one major update every three months, at the same time assessing if this content might have a shot at getting featured by the platform holders.

We also place a big emphasis on regular in-game events and rewards. For example, we recently added a “PvE events system” whereby players face off against a Villain and his army of Ninjas.

Mixing up the different challenges and even customising the seasonal theme of this system has been a great supplement to the wider gameplay experience.

What lessons have you/are you still learning from Royal Revolt 2? Is there anything about the game that, in hindsight, you'd now handle differently?

When the game was first created, I don’t think anyone thought it would reach this milestone, although of course everyone had hoped and worked hard to achieve it.

By that I mean, with the many elements that are now in the game it has become harder to integrate them from a UX perspective.

The game has become more complex from a live ops perspective, making it more challenging.

On top of this, the game has become more complex from a live ops perspective and this makes it more challenging when making large changes to the game.

These are quite typical challenges to overcome in a game that has evolved over many years, and if it was known that we’d have so many systems/events in the game three years ago, we likely would have structured both elements in-game as well as in our back-end tools differently.

That aside, it is something which is difficult to foresee, and in a way this issue is great because it boils down to being victims of our own success.

Finally, how has your experience with Royal Revolt 2 informed where you are/what you're working on now?

As mentioned earlier, Royal Revolt 2 has been a real benchmark for the company and shaped many aspects of our publishing philosophy.

Our learnings have even influenced our work on Nonstop Knight with the guys at Kopla Games.

We’re already working with Keen Flare on plans for their next hit game, so naturally what we have experienced together will carry over into this next project.