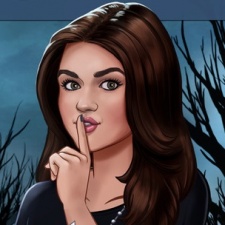 Episode Interactive, a team spun out of Pocket Gems, has previously found success by partnering with celebrity IP in Demi Lovato and Mean Girls.

But what's the significance of these partnerships, and Pretty Little Liars in particular, to Episode's overall strategy?

To find out, PocketGamer.biz reached out to Epsiode Interactive Head of Studio Michael Dawson.

PocketGamer.biz: How and when did the opportunity to partner with Warner for a Pretty Little Liars story in Episode arise?

Michael Dawson: We’re always asking our audience what kinds of shows, movies and celebrities they would like to see on Episode and Pretty Little Liars has consistently been at the top of the list.

We started working with Warner on this project in early 2016. A lot of people on the Episode team are huge fans of the show, so we were really excited when the story got off the ground.

Why do you feel that Pretty Little Liars is a good fit for Episode and its audience?

I think Episode and Pretty Little Liars both appeal to the same kind of demographic.

Episode and Pretty Little Liars both appeal to the same kind of demographic.

When it comes to Episode, we have quite a large audience. We’ve had over 2.25 billion episodes viewed and millions of weekly active users.

We have the luxury of being able to ask them what kinds of Hollywood stories they like and get immediate responses, so we knew this would be a great story for them.

We think of it less as running parallel to other media, and more as natively bringing Hollywood-calibre stories to mobile.

We think that opportunity is huge, given that billions of people have smartphones and seem to spend more and more time each day on them.

Pretty Little Liars puts you in the centre of a fresh storyline set during the first season of the show.

You can design your character, then drop it into Rosewood to experience first-hand the mystery and intrigue of the Liars’ world, in a way that was not possible in the books or TV show.

To keep the story fresh for veteran fans and newcomers, we added some new twists and turns that we believe will shock and delight.

For Mean Girls, we continue the movie’s story, taking the cast through senior year and then to college.

Episode has shown that there is a major appetite for interactive storytelling through apps. How much potential do you see here, and do you find it surprising how few companies have attempted to enter the space?

I think the real trend that Episode is tapping into is interactive over passive entertainment.

The real trend that Episode is tapping into is interactive over passive entertainment.

For a generation that grew up without smartphones, passive entertainment like television and movies made sense.

But now we have a generation who has grown up entirely with smartphones, meaning this group has always been an active participant in their entertainment.

Episode is perfect for this audience since they can enter stories themselves as well as make their own decisions in it. It’s interactive and immersive from start to finish.

Demi Lovato and Mean Girls are previous examples of big-name partnerships for Episode. What impact have these had, and how important is working with celebrity IP to your overall strategy?

Hollywood partnerships are a big part of Episode’s overall strategy. They provide exciting new stories for our existing audience while exposing Episode to fans of the celebrity or property.

These stories help grow Episode’s audience overall, who then view the user stories our creators are launching each week as well.

How long do you think it will be until we see brands on the scale of Pretty Little Liars created for and made famous by platforms like Episode? Is that the eventual target?

We think it’ll happen in the next five years, and for Episode, we can see these coming from our creators as well as our internal studio.

Our dream is to have the next J.K. Rowling come from Episode.

Episode has a community of over 5.5 million storytellers who make stories on the platform. A lot of these people have dedicated followings of people who are huge fans of their stories.

Our dream is to have the next J.K. Rowling come from Episode one day.

How do you reflect on 2016, and what are your plans for the coming year?

We’re wholly focused on making the best stories that we can on mobile. This means things like evolving our art style, making more tools for our creators, and developing great original content for our audience.

In terms of Hollywood stories, we’ve got a tonne more in the pipeline for 2017. Stay tuned!