What is the future for the UK's biggest indie mobile studio? 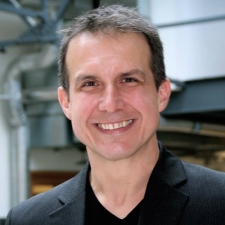 Adding the 40 employees of Eight Pixels Square's Derby office to Outplay's 150 - which was already enough to see it become the UK's largest independent mobile games studio in October - showed a great deal of ambition.

But for Outplay CEO Douglas Hare (pictured) and Eight Pixels Square Co-Owner Hugh Binns, the decision to work together was an easy one.

“We've actually known each other from the '80s,” Hare tells PocketGamer.biz at Pocket Gamer Connects London 2017. “We were all part of that cohort of people that were in the community from the Commodore 64.”

For much of the intervening period, Hare was based in Orange County, California with The Collective - a studio he co-founded with his brother Richard.

“Our paths didn't cross that much, but we were doing quite remarkably similar things,” he recalls.

“We were off building license-based console games in our studio in the States, and Hugh and Mat [Sneap] and Tim [Rogers] were doing something similar over here.”

That shared background also encouraged Hugh Binns that the deal was one that could be mutually beneficial, and the agreement was signed and sealed promptly.

“It was a really easy conversation, because it just made sense from talking for about five minutes about it,” explains Binns. “Culturally, there's such a similar approach to development.”

That culture, emerging from a history of working with clients, is something Hare believes has been of value - even in the seemingly far removed world of mobile free-to-play.

He refers to client work as a “high-pressure environment” in which the important skill of listening to criticism is demanded on a regular basis. This is something Binns can also identify with.

“Having a conversation about anything is like talking to someone who's had pretty much exactly your life,” says Hare of the parallels between the two.

But despite the similarities in background and philosophy, Hare is keen to stress that the acquisition works best because Outplay and Eight Pixels Square are in fact rather different companies in terms of output.

“The only practical changes are that we'll have the benefit of adding that collective understanding and talent,” says Hare.

“We have very complimentary, augmentative attributes - it's not like we're just overlapping.

“Hugh and his team are taking those real-time, high-end, 3D experiences into the mobile space. Although it's my background in the console world, on mobile we've not been doing anything like that.”

However, that is set to change in 2017. Following the successful launch of Castle Creeps TD in January, Hare reveals that collectively, there will be three “frontline releases” from Outplay and Eight Pixels Square this year.

“We've got a refined, differentiated casual game, we've got a PvP-focused, spectator-friendly game coming out of Outplay - a very different style of product to what we've done before - and Hugh's team is working on something we're all very excited about,” he enthuses.

It's a good time for Outplay right now, and that's thanks to years of what Hare refers to as “uncelebrated graft” behind the scenes.

The first three or four years were painfully slow in terms of trying to understand what we were doing.

Established back in 2011, a time when focusing on mobile free-to-play was very rare in the UK, early investments - no doubt encouraged by the Hare brothers' track record - helped Outplay find its feet.

“Having money allowed us to grow a team, build capability, build expertise and not hit it out of the park straight away,” reflects Hare.

“The first three or four years were very slow - painfully slow, almost - just in terms of trying to understand what we were doing, find the right people and assemble the right people to do these things.”

Now nearly 200 strong, including an accomplished external team in Eight Pixels Square, it seems Outplay is well and truly hitting its stride.

And with big launches ahead, 2017 could be the year it's finally ready to hit it out of the park.