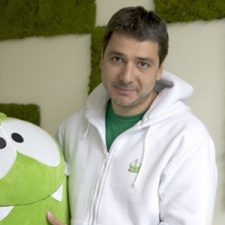 ZeptoLab is one of mobile’s most quirky and successful studios.

You’ve most likely heard of its puzzle game series Cut The Rope, they’ve been downloaded more than one billion times to date.

And then there’s King of Thieves, another stylish title, but this time a platforming/PVP multiplayer hybrid. It’s a vastly different game but keeps the same ZeptoLab DNA that makes it instantly recognisable as one of the studio’s titles.

And it was another hit too, generating 50 million downloads.

Now ZeptoLab is trying its hand at another completely new genre – a user-generated multiplayer vehicular combat title that focuses more on the metagame and strategy than on puzzles and real-time play.

Called C.A.T.S. – Crash Arena Turbo Stars – it retains that quirky and humorous style the studio is known for and takes it in a new direction.

Players take part in an underground championship where cats build their own machines to battle 1v1.

Users are tasked with constructing the best vehicle they can, and then sending it off into an automated fight against another player’s machine that could all be over within a matter of seconds.

To build the best machine for combat, users have a plethora of options available to them. Players choose the vehicle’s body and which weapons, from missiles to blades and chainsaws, to equip it with.

If you look at all the top grossing titles, most of them focus on the metagame, there’s really not much gameplay.

Users will then also need to attach wheels and decide whether they’d like to add other items such as a booster or deflection bomb.

Each part has its own health and energy points, and carefully crafting a car to be the best battler in the underground is the main thrust of the game.

It’s this focus on the metagame and the automation of what could have been considered the main gameplay that is more akin to a title from Asia.

“I think the trend in the industry, if you look at all the top grossing titles, most of them focus on the metagame, there’s really not much gameplay,” ZeptoLab CEO Misha Lyalin tells PocketGamer.biz about the global mobile market and its design choices for C.A.T.S.

“So I think that’s a natural progression in games that we see at this point. But what we’ve got is the kind of gameplay that people can interact with if they want.

“We experiment, C.A.T.S. is a product of our innovation process that last time brought King of Thieves, which was also very interesting and a mix of genres. We’re not sure what’s going to work and what’s not going to work, that’s why we're trying a simple approach and, if it gets popular, we’ll quickly add on to it, which we plan to do with new versions and updates every month.”

The user generated content aspect of the game is part of another industry trend from the last few years.

Games such as Minecraft and Roblox have been able to harness UGC to great success, while recent mobile-specific titles such as Big Bang Racing have also tapped into player creativity.

More than being just another trend though, Lyalin says UGC makes the game fun to play.

“When we develop prototypes internally in the office, we look at things that will be fun to do, and trends kind of help that," he says.

"If you think something’s fun to do that means that other people also might join you, who are already doing something similar in the real world for example.

“There are shows like BattleBots where robots fight. There are many things in the world where you clash two vehicles, two machines together.

“From a user generated point of view, we thought constructing something simple like that would be fun. That way, it’s not really complex missions, it’s very simple missions, your skills don’t really affect the outcome of the fight, what really affects it is your strategy, how you actually build the vehicles. It’s more of a strategy title than a fighting game.”

The game design, rewards and monetisation system are all blended together in C.A.T.S. – where it again takes some inspiration from Asia through using a gacha system. Players can win or buy crates for new parts, but they can only unlock the box – the parts they get are all completely random.

Lyalin is optimistic that all these design choices have created a game that is fun and has great viral potential. He highlights that during soft launch in Canada and Nordic countries, the cost per user has been very low and that the title is also showing good monetisation potential.

And at the centre of its early promise is the quirky nature, fun factor and art design the studio is known for.

“We always try to put fun and quality into everything we do,” he says.

“People expect from us something that will be different, and at the same time it will certainly be fun to try and fun to give it a go. Then we apply a lot of quality to it, so the visual effects, how the game feels and all the aspects of how to shine, I think that also stands out.

“These things make up what Zeptolab really stands for: fun, quality and innovation. And I think that’s what players really expect from us and is what we try to do with every game."

How ZeptoLab uses randomness to monetise King of Thieves